A Nation of Readers 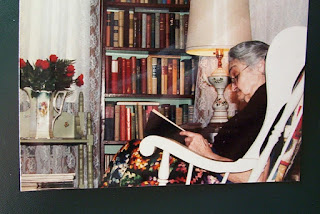 That was the name of the contest that was offered by our local library. This is taken with a 35 mm and was the only shot I took. That was the same with the other two. I later learned that real photographers take many shots and then choose the best one. I was lucky to get the one I wanted and all three of them were taken on film. Unlike today with digital, a person cannot see what they have until hours or in some cases, days later.

This lady was my dad's cousin, Violet Rose Hampton Dewey. This was taken in a house that was built in 1888. The room they called the library was lined with shelves built by her husband. The pitcher on the side table was given to her mother, Eliza Pringle Hampton. She went to a store with her dad when she was about five or six and picked out that pitcher to give to her mom.

Under that afghan, which I believe she made, are sweat pants.

I was so delighted that the photo won first prize. She went with me to  the award winners presentation. I received some money and a large book about photography. I wish I could remember the year. I believe it was the late '80's.
Posted by marlu at 4:10 PM