The place to buy squirrel food 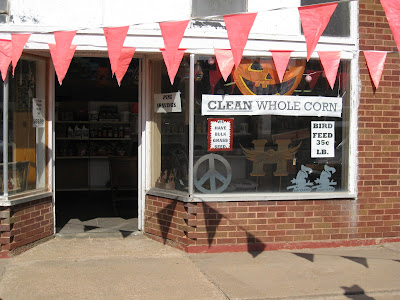 This feed store stocks food for the birds and squirrels which we feed regularly.

I especially like the Hutch High logo next to the peace sign. The selling price for the Salthawk H is about $70. I don't think I like it quite that much.

Boo! Just in Time for Halloween 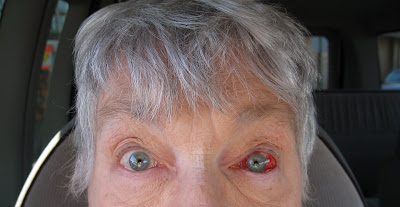 This red eye appeared today and was first noticed by my friend, LP. I didn't see it when I put on "makeup" and I guess that is a sign I do need glasses.
This is not a first time occurence and the eye doctor says it's no big deal. It sure looks odd though. 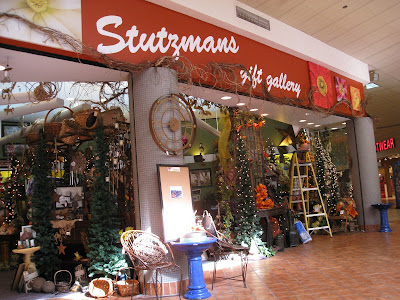 A trip to the mall for the first time in many months revealed some new things.
As usual, the holiday decorations are two months previous.

We used to own an airplane. This is a 1946 Aeronca Champion 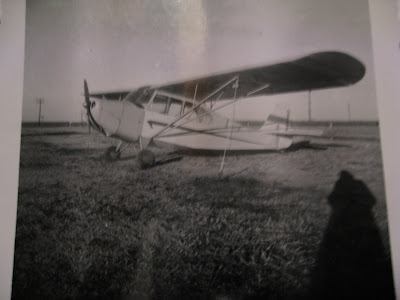 . We owned it briefly in 1952. I wish we still had it! Our older son traced it's registration number a few years ago and found it registered in Minnesota or Montana - one of those northern M states. . .

As far as the eye could see 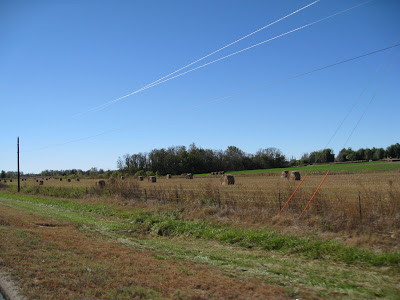 These bales have always amazed me. When I was a kid, I thought they looked like shredded wheat - the large ones - long before bite-sized appeared. Hope they taste better than that to the cattle. 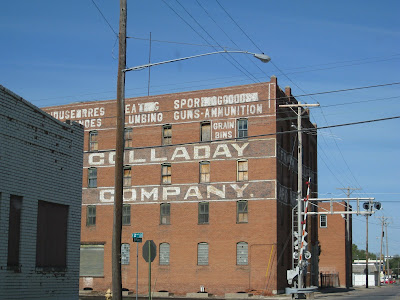 I wonder about this sign on the old Colladay Hardware building at 3rd and Plum. It looks like someone painted over part of the words. 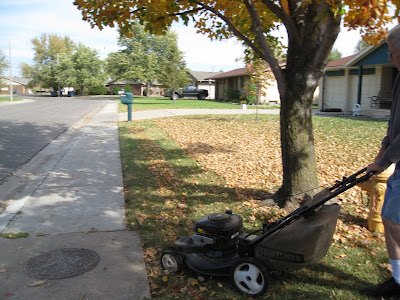 L. is concerned that "our" leaves are being deposited in the neighbor's yard. He started using the mower to pick them up this morning. The wind is blowing with gusts to 20 mph so he was losing the battle. I keep telling him that maybe the neighbor wants them for mulch on his grass but he won't listen.
Enjoying the gorgeous fall days! 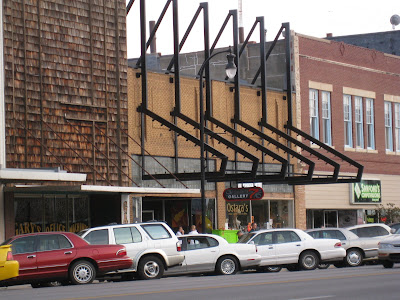 The person who owns this building has taken down the old false aluminum front that was hiding the original face. I'm not sure what he is going to do next but I hope it's removing the iron.

In the lower center you can see a green, upright piano - one of about twenty that have been donated. People are encouraged to sit down and play.

This is one of the bikes available in downtown Hutchinson for the convenience of anyone who wants to get someplace which happens to be located farther away than they want to walk. 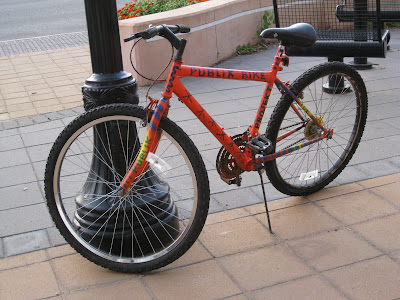 (Do not try to diagram that sentence.) The rider then leaves the bike at the new location for the next rider.

When the bikes were first put out, I believe three of them were stolen that first day. They were recovered.
This is Third Thursday and the old, upright, donated pianos were out on Main for anyone who wanted to stop and play.

They will be rolled inside the stores at night to prevent damage by rain and possible theft. However, the act of moving one of them is much more difficult since you can't just hop on and ride one away.

What a difference a year makes 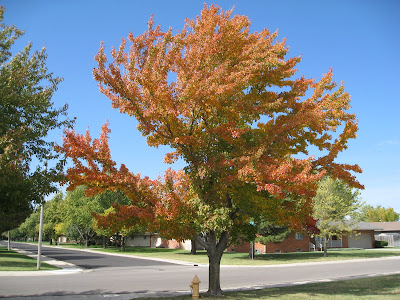 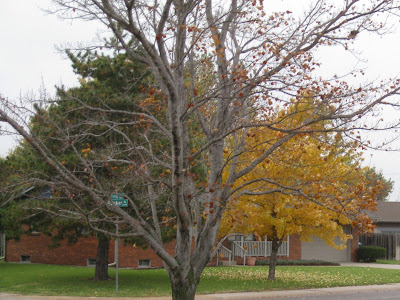 These two pictures of this tree were taken a year apart, less one day. Last year we must have had an early frost because this year the leaves are still firmly attached and quite colorful. L. hates to see them fall. He uses the mower to "rake" them. 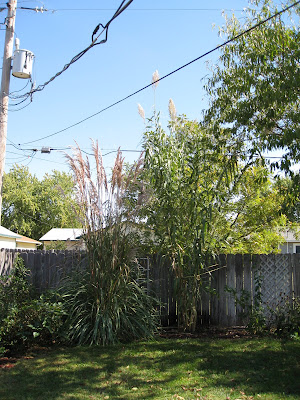 L. planted pampas grass and some bamboo last spring. The bamboo was obtained in a surreptitious matter from public property. It seemed to grow equally as well as the pampas grass which was actually paid for.
I think that fence is approximately six feet tall. 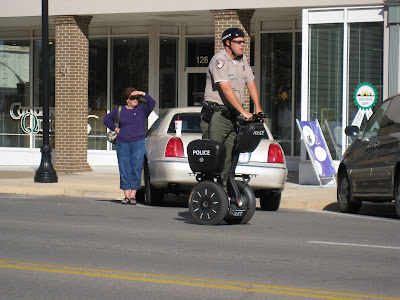 We have no mounted officers on horses but we do have a segue rider. In this view I see four places where he is identified as "police." There is one more on the other side of his helmet....in case you were in doubt.

The last rose - and iris 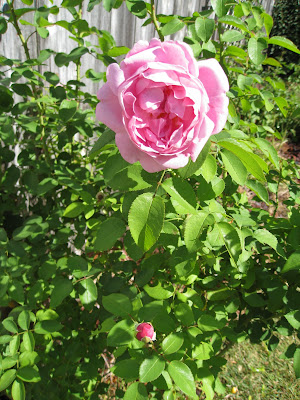 These specimens are blooming in our yard today. Our temperature is more like June than October.

I wonder if we should have cut those iris back when they stopped blooming a few months ago? 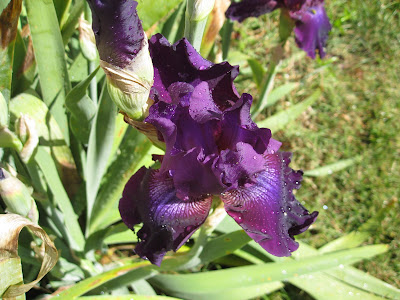 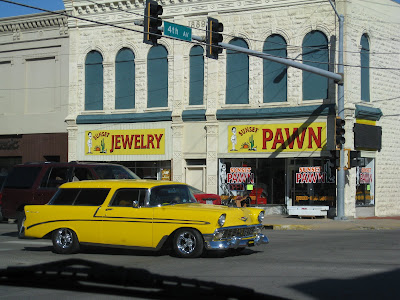 We went to the Hutch High homecoming parade today. On the way home, we stopped at the 4th and Main stoplight. I told L. that the yellow sign was so colorful I had to take a picture of it. Just then he said, "And there is a yellow car." I didn't even see the car and clicked the shutter. What a nice color scheme. . . .

I have seen more pumpkins like these this year. 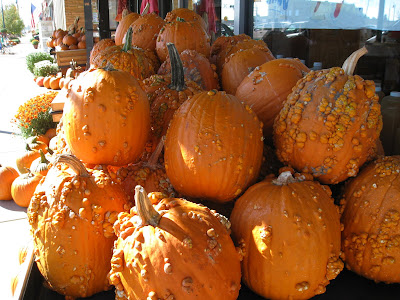 I don't remember so many of these before. A dear friend who knows about such things says this is a fungus. It can be prevented by spraying.
So are the pumpkin growers striving for this or is it that they don't want to bother spraying?

Which is worse - a fungus or chemicals to prevent it? 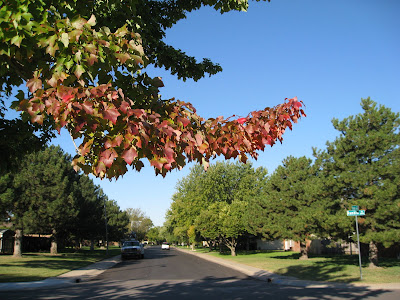 Our maple tree is just beginning to show some red. We have slightly cooler breezes and October 13 is about time for it! 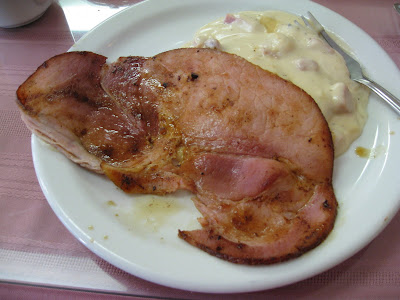 This picture is from last Friday at Carolyn's Essenhaus in Arlington. What a piece of ham that tasted like ham used to taste! And under it, more verenika. L. had a chicken fried steak and said it was really good.
I haven't been anywhere since that day. Something happened to my back so I've had lots of bed rest and some pain pills. Feel almost human today but I plan to take it easy for a few more days. 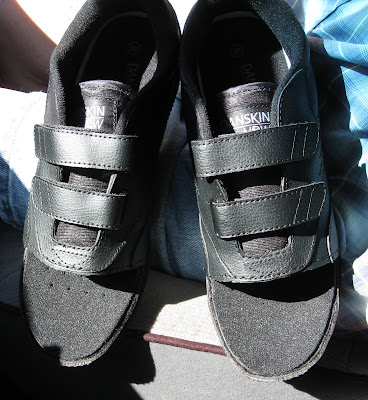 These shoes have been modeled after a pair worn by L. to do yard work in. The oldest granddaughter admired (?) them so the grandpa had to created a pair for her. With the help of Ed's Shoe Repair, the toes of the shoes were removed and the edge stitched. Personally I don't think it will start a fad in Texas but L. thinks so. We'll see.

This place doesn't look like a restaurant according to LP. It was her first time to eat there.
We found good food: bierocks, taco salad, sandwiches, meat ball dinners and lots of pie.
Sadly we didn't have room for pie but 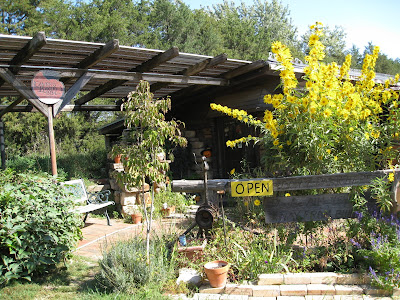 the large taco salad was plenty filling and fresh!

On Friday they will have verenke - one of my favorites that makes both L and LP turn up their noses. I do believe I have some German blood in my veins.

P.S. For the second time in two days some spelling has to be corrected: verenika seems to be the accepted version. 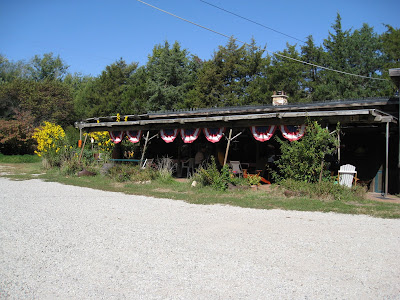 Oops. . . I think that phrase belongs to Montana. But we do have a big sky with no mountains to block the view. In this scene north of Yoder there is a lot of red milo or, as we used to call it, kaffer corn. 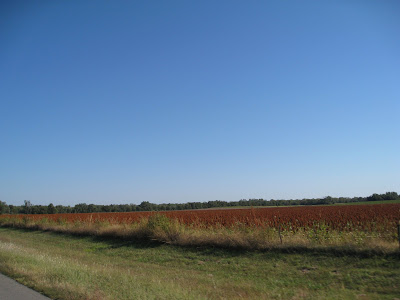 I have found that the corn is spelled kaffir and according to the dictionary on Google, the term is now taboo. . .Sorghum and milo are acceptable.
Posted by marlu at 8:18 AM No comments:

Today was the first time we've had the car washed since our oldest granddaughter gave us this decal! I think it's been about a year. Naturally, I got it crooked....but it's on the van! 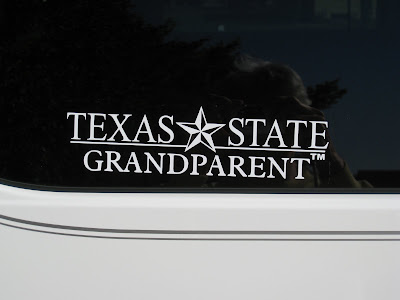 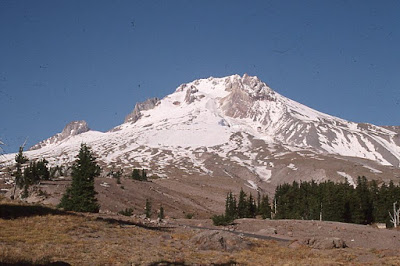 This peaceful scene of Mount Hood was taken a few years ago. We haven't been to Oregon in far too long! Traveling is not our favorite thing to do but we would like to just magically appear there.

Speaking of traveling, the warnings to tourists or those going to Europe really confuse me.
"Don't cancel your trip, but be alert." What does that mean? Look for someone in a bulky coat during warm weather (maybe hiding explosives?) An abondoned car with wires exposed? A package on the sidewalk. It seems to me they are making us all a little paranoid with no way to control what someone who hates freedom will do. 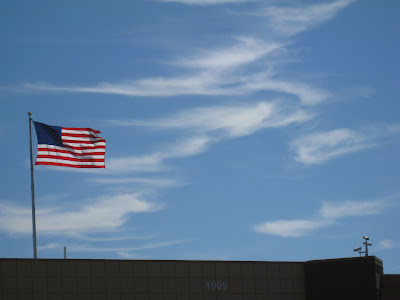 This is the first picture I have taken or have seen that doesn't show the stars clearly. It looks as though they are gray, not white.

Sadly, the photo also shows one of the latest additions to our society: security cams pointed in all directions.

The cameras make it easier to track criminal activity so I guess if the rest of us aren't doing anything illegal, we should just ignore the loss of privacy in the parking lots of the world - and street corners - and stores - and highways - - 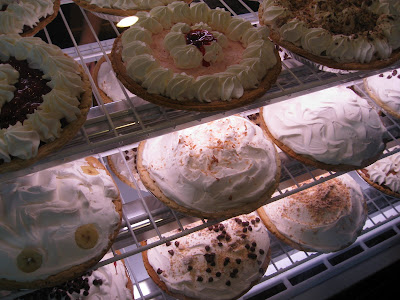 A road trip to the Carriage Crossing for pie. Not content with a piece of pie with coffee, L. bought a whole pie - Toll House. Think of chocolate chip cookie dough with whip cream and lots of chocolate chips on a delicious crust (undoubtably made the old fashioned way with lard) and that's it.