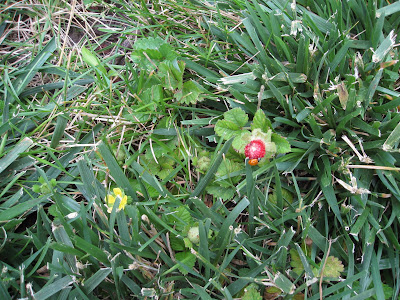 We have a lot of these small strawberry plants in the backyard. Lee happened to get a picture of one with a lady bug on board. The berries are very small and I don't think we'll harvest them.

Stranger in our midst

I know this is a very small varmint and hard to see....he ran through our yard, I grabbed the camera and he was already on his way north - to Alaska? It's a prairie dog. The first one we've ever seen in town. I hope he doesn't start burrowing. We have enough mounds from the night crawlers! 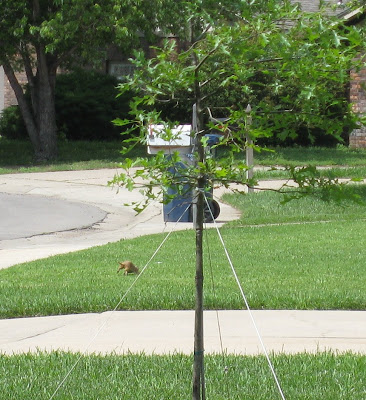 Among the lava rock

L. took this photo of a large toad stool in the back yard. We have lots of small brown ones in the grass in the side yard but this big white one is in the shade. These are amazing plants.
Not to be confused with mushrooms! I like mushrooms but would not attempt to gather wild ones. A remark by the younger son has remained in my failing memory: " I won't eat anything that grows in the dark." 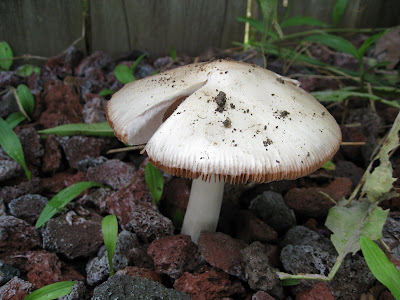 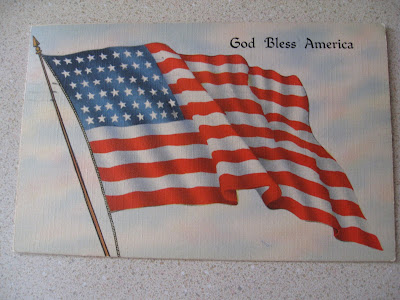 This picture of our flag is on a post card from 1942. We have a few old post cards we have saved over the years. This one is from a friend, "Pat" who wrote from Colorado and said she was having fun and wished I was there. Sort of the standard greeting.

I wish I knew who Pat was. I knew several girls named "Pat" in grade school but I don't know which one this is from. 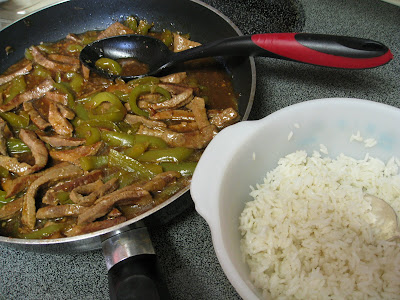 This is one of L.'s favorites and it is GOOD.

I have seen maps like this before. Usually there is a star or a dot near the words "You Are Here." L. and I looked carefully and could see no such indicator. Then we looked all over the map itself. I knew we were in the park and on the trail but at which point? Maybe we're just too dense to figure it out. Could the "powers that be"( like the park department) help? 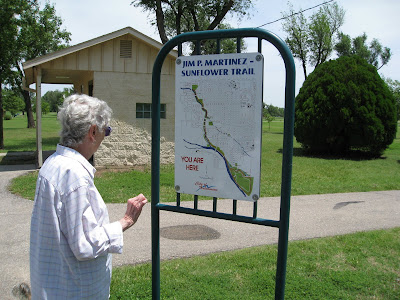 Do all peony plants bend over like this? L. even used some ski rope to hold them up. It's now hidden by the bowing flowers. Wally is alert, ever watching for the cotton tail that lives somewhere, but comes here to lunch. 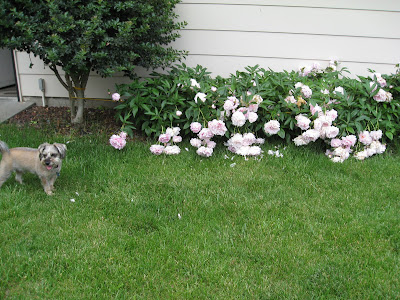 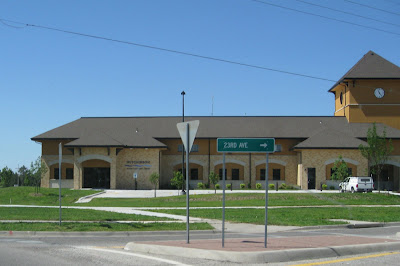 This is the view of the plant from the round-about... 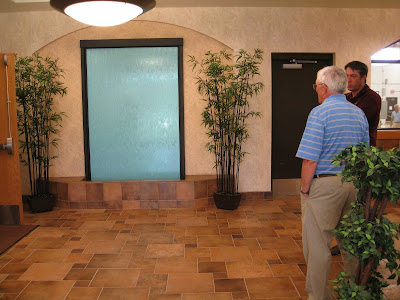 This was Grand Opening of the water plant in our town.
This was voted on by the city commission in 2003 and the plant was completed in 2009.

Going from salty, hard water to reverse osmosis has been a relative short time. The plant is spotless and very cold!

It is an amzing array of equipment; pipes, pumps, vents, filters and tanks.
They can process up to 6.5 million gallons per day.

A computer system can show operators how much water is in each of three towers in the area, the output of each well and much more. 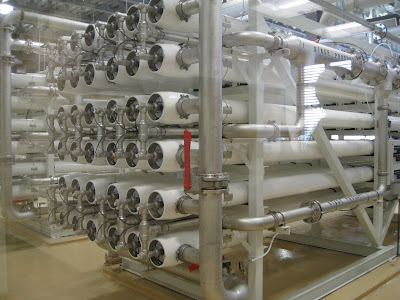 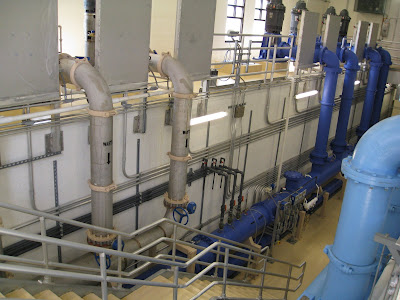 If we had never owned a camera, we'd be wealthy today. I have pictures in drawers, in boxes, in envelopes and in closets. Yesterday I started sorting them 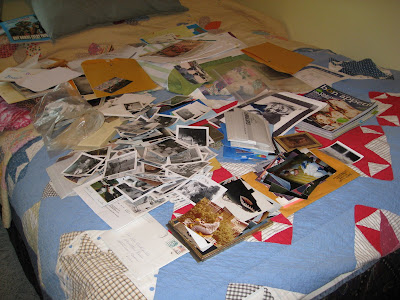 . The plan is to get them all in albums. We have twenty albums now. Most are full but there are some blank pages left.
If there are duplicates, I think I'll send them to the persons in the photo. Won't they be surprised? Then they can put them in a drawer, box, envelope or closet.

A Nation of Readers

This photo was an entry into the public library's contest called
A Nation of Readers. It is my dad's cousin, in her 80th year. I love the pitcher. She bought it for her mother when she was about 3 years old. She saw it in a store while she was with her dad and wanted to buy it.
I wish I knew how much it cost back then (1907.) 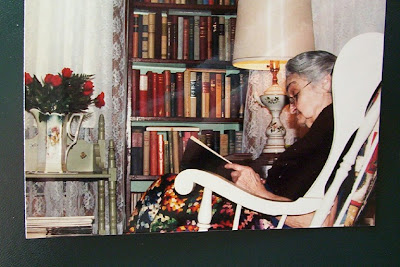 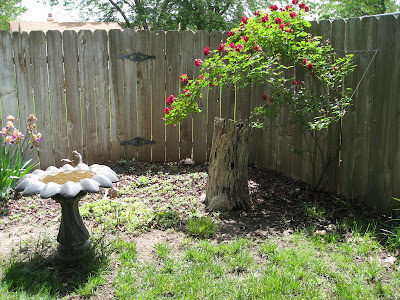 Looks peaceful now that the snake living in the old stump is gone. L. had quite a shock when he moved the thing last year. Almost every night there is a beautiful sunset. We are so lucky here that there are no mountains to block our view.

Finally we have some peonies. The past two years they did not do well because of late freezes. 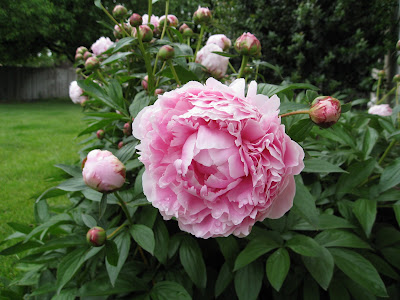 We drove by Roosevelt School, built in 1920, and it has a For Sale sign out front.
For a while the building was used as a church.

It seems to be built like the other buildings of that era - built to last! I hope someone can find a good use for it.

Our local high school, which was built about the same time, was purchased, partially demolished (the auditorium was the first to go) and after plans for apartments for older folks didn't work out, the rest of it was torn down.

This starts a sad list of buildings we have lost. The Wolcott Building which was said to have been the first air conditioned office building west of the Mississippi, also was torn down for a park. The Bisonte Hotel, a Harvey House, also was destroyed.

There are good things going on here, however. Carey Park improvements; new streets in Hyde Park to replace bumpy bricks; downtown upgraded; new buildings at the fairgrounds; Sylvan Park greatly improved (and renamed George Pyle Park); the old Grace Hospital being refurbished for aparments. We are fortunate that people are investing in our town. There are still many areas of town that could use indivual attempts to update. For instance, fresh paint. 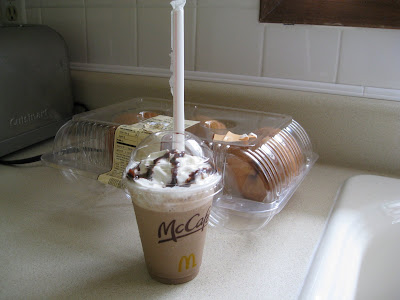 Today was another day at McDonald's to try a free sample of their Frappachino - Mocha or Carmel.
Mine had to be Mocha. The cup from the top of the dome to the bottom is 4 1/2 inches. Bigger than I thought it would be.
Very tasty!
By the way, the title is a quote from Duke Kahanamoku the father of modern surfing, repeated many times by Arthur Godfrey on his radio show in the 1950's.
OMG!

Wally is about good for three ball retreivals and then he's done. 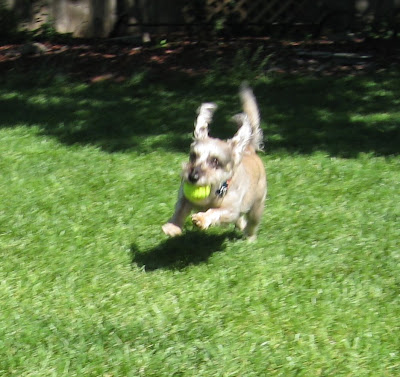 Of course, he is ten years old but very lively for his age.

I've always loved Ritz crackers. When I was a kid, we used to eat them with Pepsi for an afternoon snack while we looked at old Photoplay magazines in the basment. That was the only place to keep cool in the summer if we couldn't afford to go to the movies. 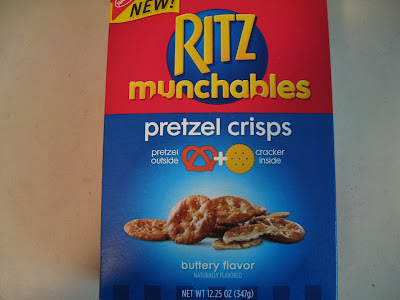 Well, now they have come out with a new product that combines pretzels and Ritz crackers. Very tasty! 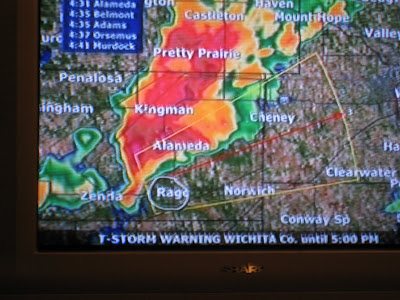 For several days the weather men have been telling us that there have been no tornados reported in our state for a year.

That ended yesterday. From three o'clock until after seven, there was tv coverage. We are fortunate to have radar and warnings. . . . saves lives if not property. Sometimes it feels like it's overdone but if stations have this technology and didn't use it, that would be a bad thing!

I just hope it doesn't frighten the occasional tourist. 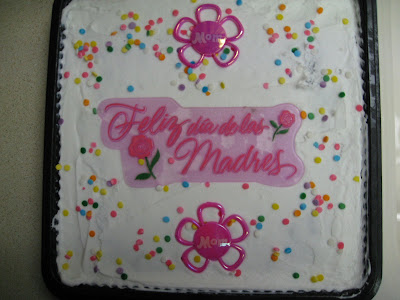 The card came a day early, propped up on the computer keyboard. He knew I would see it first thing Saturday morning.
The cake came almost late, Sunday evening. The only one left at the bakery was decorated with Spanish words. He said since I had had eight years of Spanish, I should be able to read it. (Actually it was only six years - the other two were Latin and French)

"Happy Mother's Day" is the translation, in case you couldn't guess. 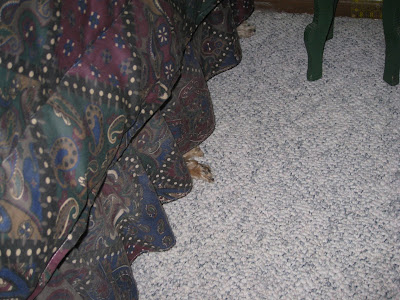 Lately I've been thinking - thinking too much is not always good, as I've preached to others.

My thinking is about all the things that come to mind when I'm interacting with others and just living life.
I may be a living a hypocrite's existence. I seldom say the thing that has just popped into my head. This doesn't happen all the time - just when someone says something that I believe to be totally unfair, untrue or absolutely out of the realm of common sense.

Am I being completely dishonest? Does this show that I am basically a cruel person? I have always felt that I didn't want to "hurt" anybody's feelings. And at times I have done that without meaning to. On the other hand, a wise person told me that if you don't speak up when you disagree, the person you are with will think you are in agreement with them.

A long time ago I had a discussion with a dear friend who believed if you thought a swear word, it was just as bad as saying it. I disagreed, saying that thinking it and NOT saying it showed self control and that only you and God knew that you had thought it. The people present hadn't heard it and so weren't affected. Finally, after much thought (too much thinking?) she agreed with me. Wow! The power of persuasion!

You'd thinking having reached the 80th decade, I would have figured this out - what to say and how to react to remain in other's good graces.

Limited emotional development and thinking too much must be the answer.

What does the photo of the dog sleeping under the bed have to do with this blog? Maybe he's thinking about something important and has found a quiet place to do it. I may join him in the guest room.

The Art Fair was held today...perfect weather, very little wind, sunny skies and a large crowd.
This is one of the nicest things Hutch does in the spring. 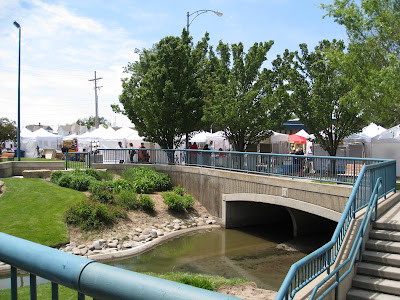 This about covers the flowers that we have blooming now.
I don't know why but these look like something I've seen that was called Japanes Iris. 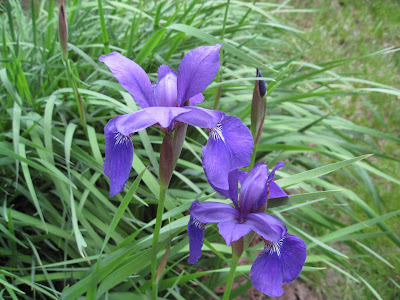 We're waiting for the roses and the peonies. 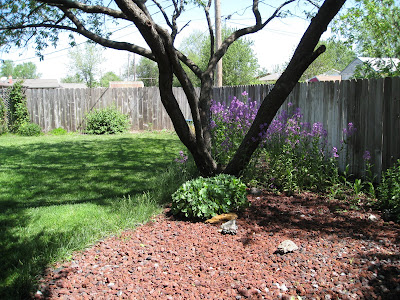 This is our rather odd tree that had the pink and white blossoms on it in early April. Now the leaves are green but the garden phlox below give us a little color.

I don't "garden" but I sure enjoy the efforts of others. These flowers were here when we moved in. Peonies, iris and rose bushes are also scattered around the backyard. Even some miniature strawberry plants are in the lawn.

If only we knew how to smooth out all the "hillocks" caused by the worms that are mostly gone after some treatment.