Another Afghan - not pastel! 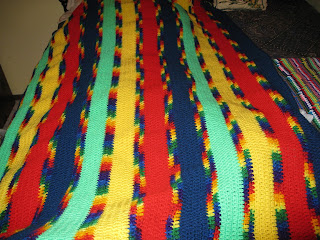 I decided on some brighter colors.  The camera reads the bright glow worm green as turquoise!

Yesterday was an unscheduled visit to our doctor. Nothing serious but some questions needed answering.

During the conversation, the patient mentioned that he eats about a pint of ice cream every day. (He has been diagnosed with Type II diabetes.) However, his blood tests are always within the limits of "ok."

The doctor's answer to this confession?  "When I'm eighty-five, I'll eat ice cream every day too." 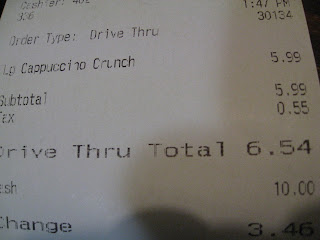 Advertising is a wonderful thing. I seem to be a sucker for it. When I see a new item advertised, I think I need to try it.
Since I have given up high priced coffee to go, I decided I'd get a milk shake to split with Lee. He likes ice cream treats even more than I do. So I wheeled in to a chain burger joint and ordered the Cappuccino Crunch. I didn't specify a size. At least I don't remember asking for a large.
But that's what I got.
When you are so ancient that you remember 25cent milk shake in a tall glass, with more in the metal container that it was mixed in, a five dollar ninety-nine cent milk shake seems a little pricey. And then there is our 9% sales tax. If only it were enough to get Kansas out of the hole we're in financially!
The shake was good and at least we tried it. That's enough about that.
Posted by marlu at 5:27 PM 1 comment: 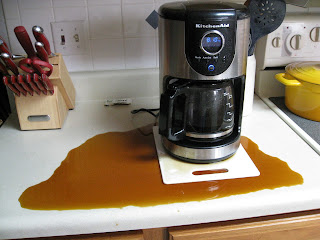 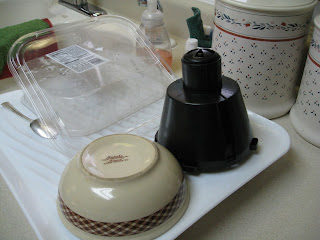 This morning I got up early, Saw there was still some coffee in the pot from yesterday so I poured myself a cup, heated it in the microwave and left the rest for Lee.  Decided to wash the basket contraption and put it on the drain board. I planned to wash the carafe after L. had his cup and then make a fresh pot.
Enjoyed my first cup of "reheated," took my shower, and met Lee in the hall telling me had made fresh coffee. That is so nice of him! Usually he does it at night so it's ready to turn on in the morning.

A few minutes later, I went into the kitchen and the first photos is what I found. The second shows where the basket remained.

Nice clean-up of counter and when I lifted the pot to see if it was full of grounds, more coffee came running out of the handle, So I mopped the floor. It needed it anyway. 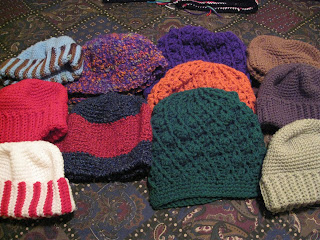 I've been busy.  Stopped with the afghans and started the hat phase.
Posted by marlu at 9:41 PM 1 comment: 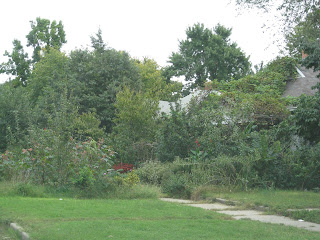 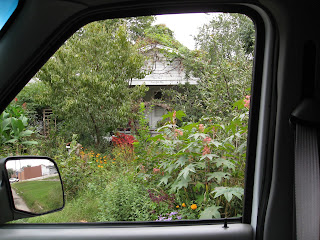 This is a home near a shopping center in our town. At least they don't have to mow.
And to think that one of our former neighbors reported us to the city because we had planted some
wild flowers in OUR yard between our privacy fence and his chain link. Inspector came out and we were told to cut them or pay a fine. I had my first digital camera and took a photo in to his office. He was more amazed about the camera than he was concerned about the "violation." That neighbor was usually very nice. I guess he didn't like wild flowers.
Posted by marlu at 9:56 AM 2 comments: