It may be the cold weather, but our vehicle is screaming in a high pitch tone that reminds me of the term "banshee." The low temperature was in single digits last night and probably was the same in the unheated garage. Off to the friendly Ford garage! Good news: The head cold seems to have been kept away for now.
Posted by marlu at 10:33 AM 2 comments:

Woke up this morning feeling like a cold was sniffling its way into my nose. Ugh! I haven't been anyplace to see any people. Only our neighbors who came over the twenty-fourth and they didn't appear to have colds. Where do these germs come from? L. does not have any symptoms. I started right away with some Zycam Rapidmelts that have worked before. And lots of water. We'll see.
Posted by marlu at 5:40 PM 3 comments: 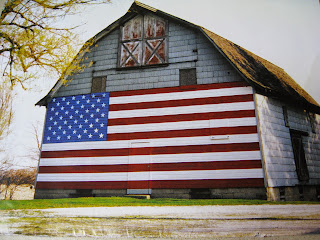 This is another calendar photo. I really like to see these creative paint jobs.
Posted by marlu at 3:49 PM 2 comments:

What Day Is It?

Usually a holiday in the middle of the week doesn't bother me. This time, I forgot that today was Saturday. I got up all ready to watch CBS at 8:00 a.m. for their best show, Sunday Morning. Later I received this photo of me in about 1947 looking very thoughtful. Maybe I was trying to figure out what day it was then.

So Here's the Basket 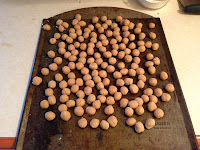 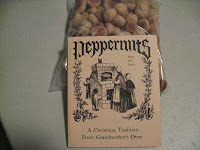 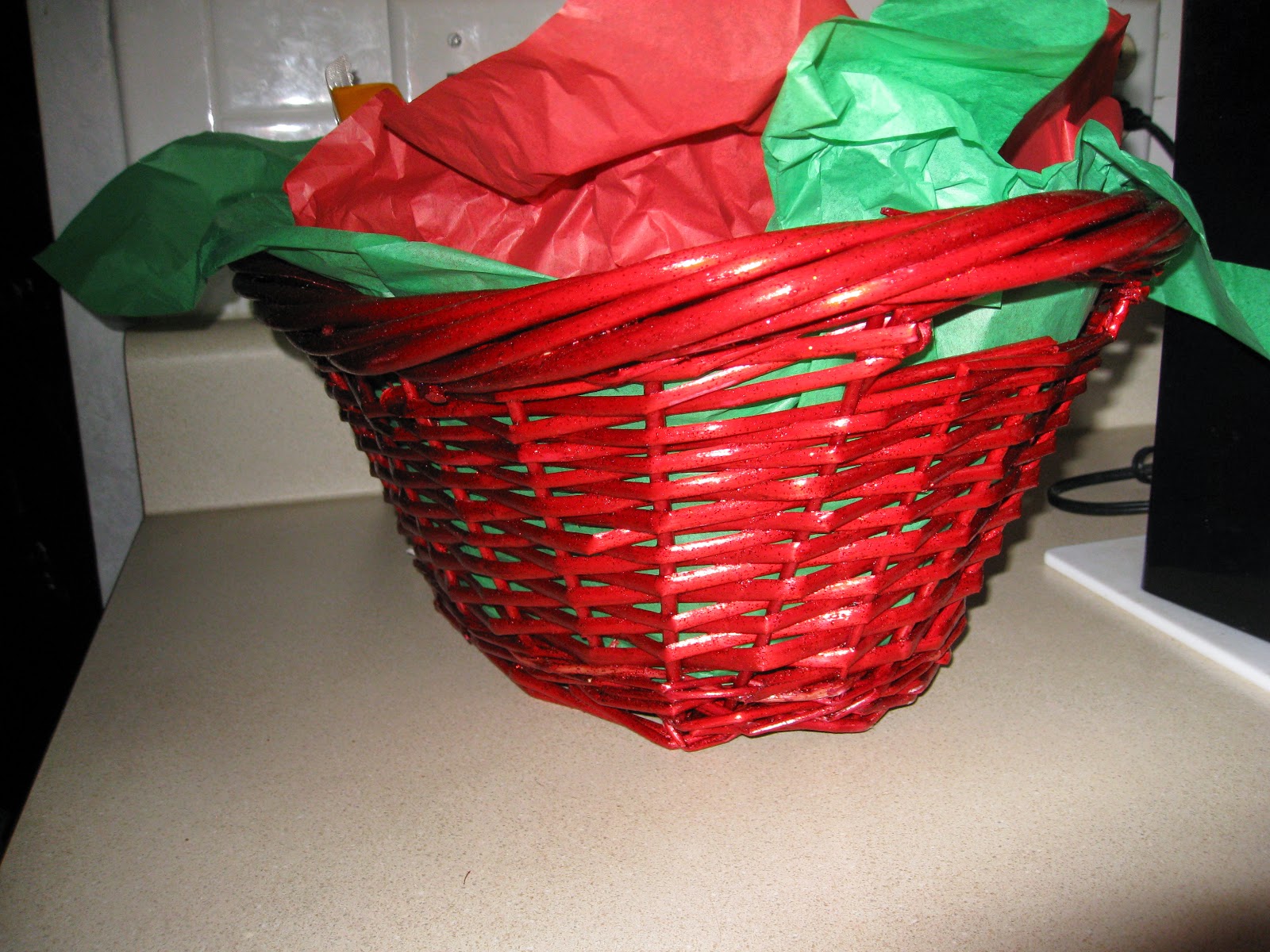 This is the oval basket that has the treats inside. We are enjoying fruit and candies and will open the
meat and cheese later.
It sure takes will power not to "over indulge."
We didn't bake any pepper nuts this year but managed to buy a small bag from the
Carriage Crossing restaurant. I wish we felt more like baking a recipe that calls for 12 cups of flour.
Posted by marlu at 12:09 PM 1 comment: 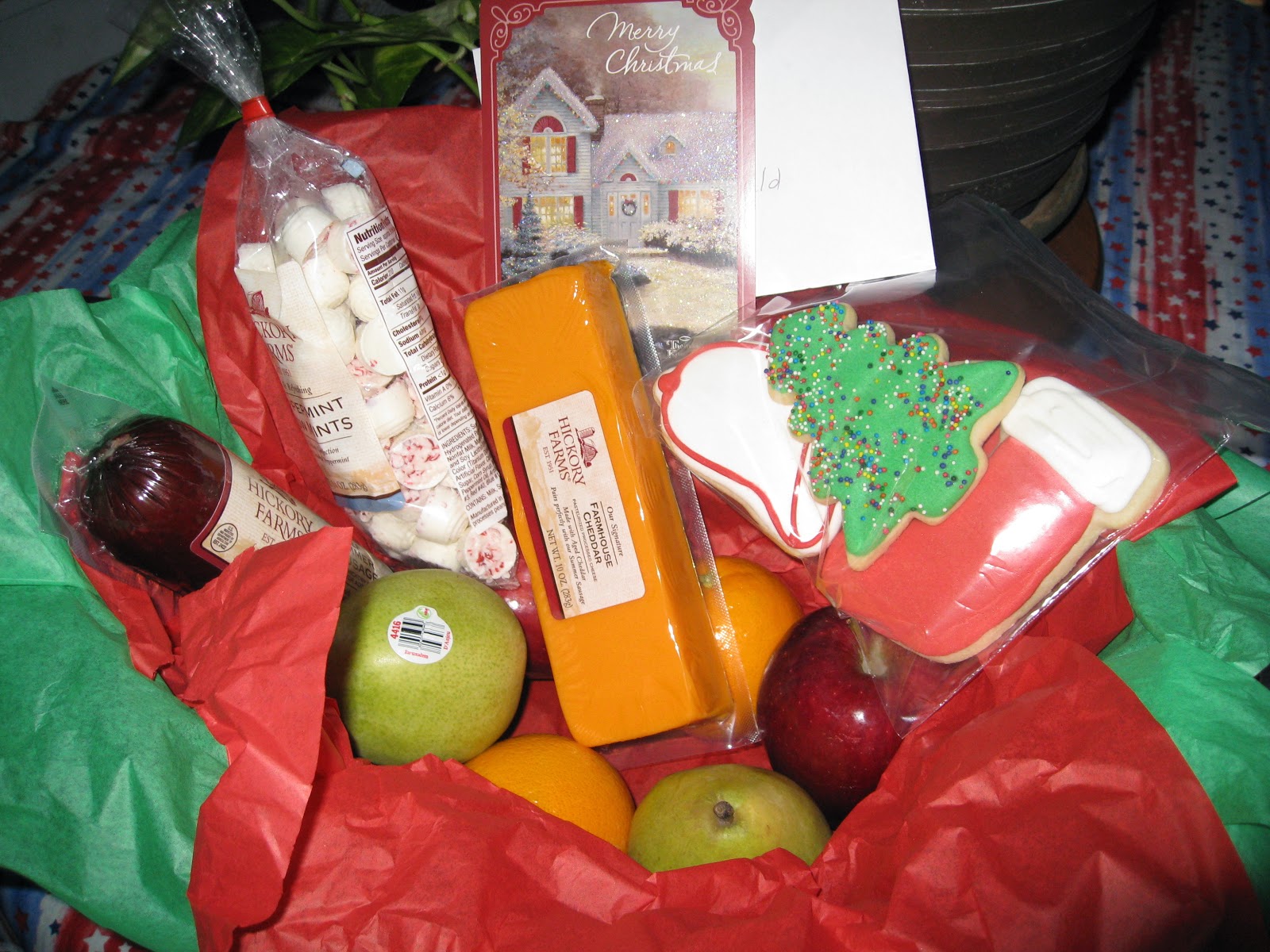 Yesterday the doorbell rang. It was our neighbors with a gift basket!
How thoughtful and yummy!
It is wonderful to have great neighbors.
Posted by marlu at 9:53 AM 3 comments: 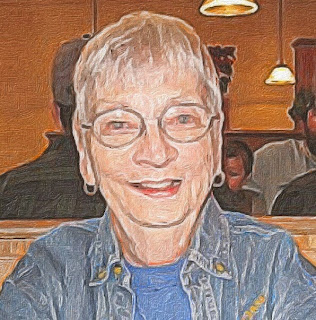 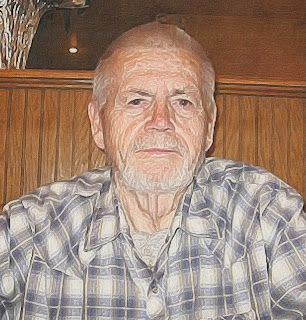 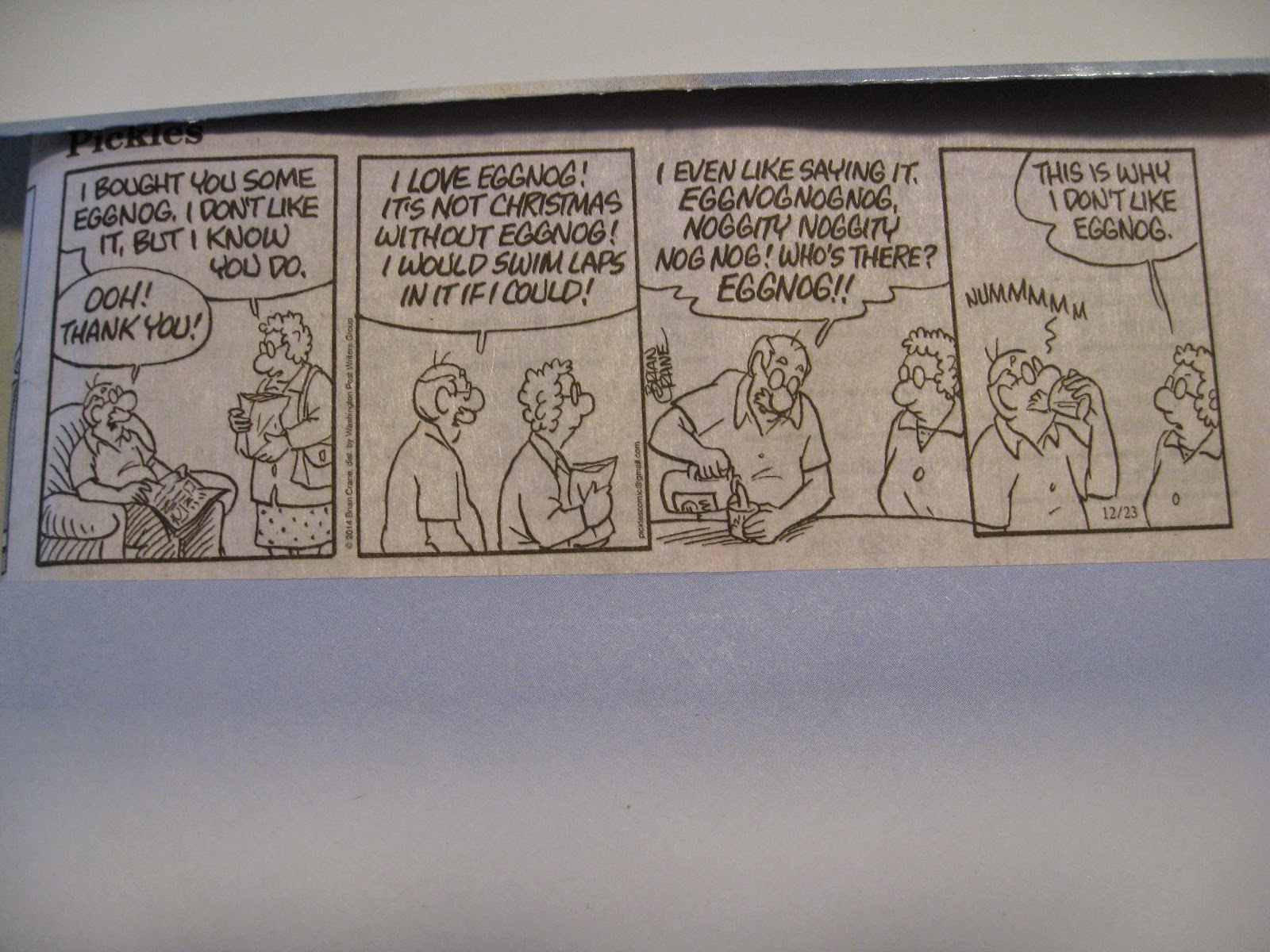 We really enjoy Pickles. So many of them hit close to home.
Today was "us" with the rolls reversed although I never thought of swimming in it.
Posted by marlu at 10:58 AM 5 comments:

But only if you let him. We received a letter today from our insurance company. They offered to let us install a "black box" on our car in order to see if we are driving responsibly. If we are, they MIGHT lower our auto insurance five percent. Wahoo! I think we'll pass. We drive carefully to the grocery store and the clinic - each about mile away. And I now make sure all four wheels come to a complete stop at any octagonal red sign with white letters.
Posted by marlu at 2:19 PM No comments: 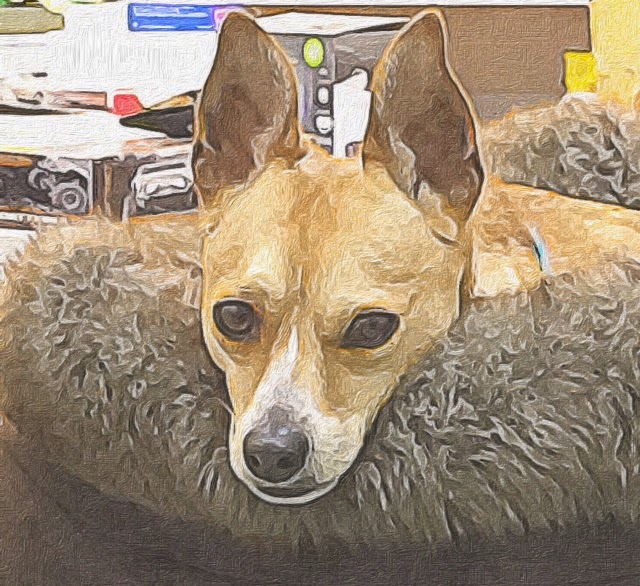 I have just accidentally discovered how to retrieve photos from incoming emails to my phone!
Oh Happy Day.

This is from a photo of me at breakfast a week ago today. It was sent to the west coast and converted
to this format by an ap on an iphone by our son. Then sent back to me on my phone.
I emailed it to my computer and Picasa and then uploaded it here.
Ain't technology grand?
It reminds me of Van Gogh's work - sort of.
Posted by marlu at 7:13 AM 1 comment:

Long Ago and Far Away 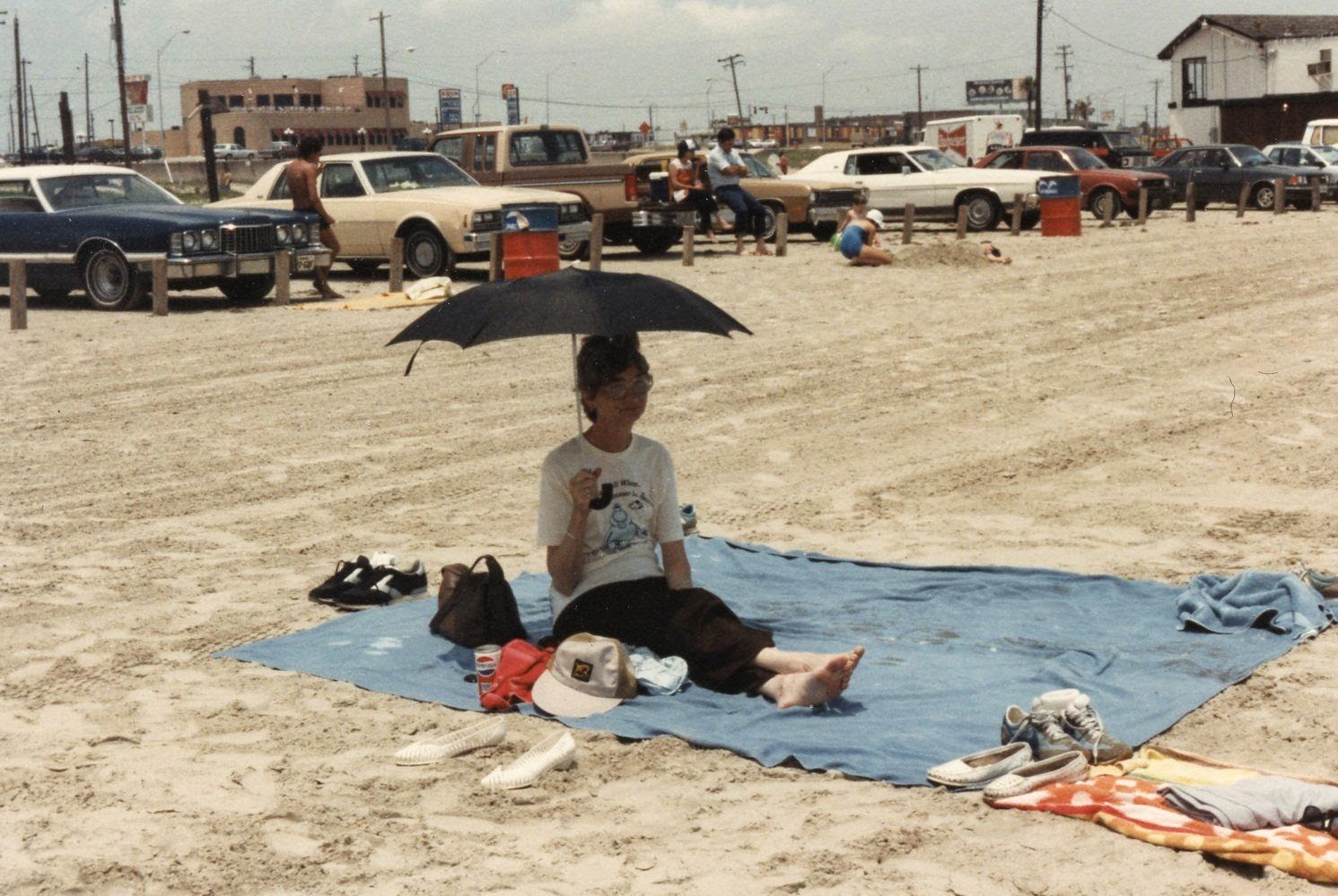 I just received this flashback Friday photo from a daughter of a friend. This was in Galveston, TX in 1978. I have some great memories of a trip with an airline who quoted the price of $78 round trip as a Chicken Feed special.
I wonder if I thought the sun was going to give me more freckles?

Our younger son and I flew to Houston and visited a friend that I had known since 1941. We are still in contact with her and her offspring!
Posted by marlu at 7:06 AM No comments: 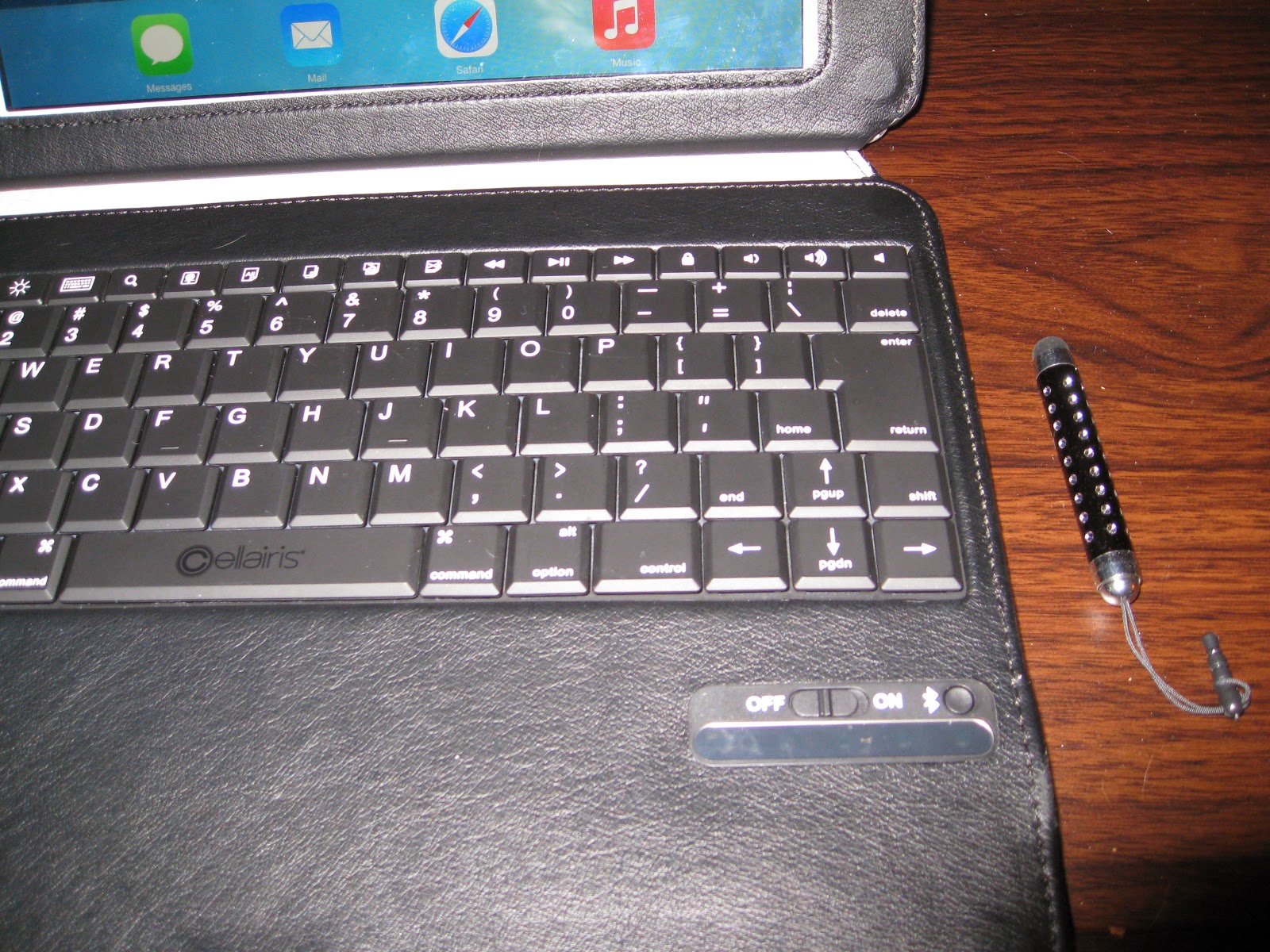 Christmas came early. A new iPad, stylus and a table to use them on whilst lounging in bed.
Life is good.
Posted by marlu at 4:39 PM No comments: 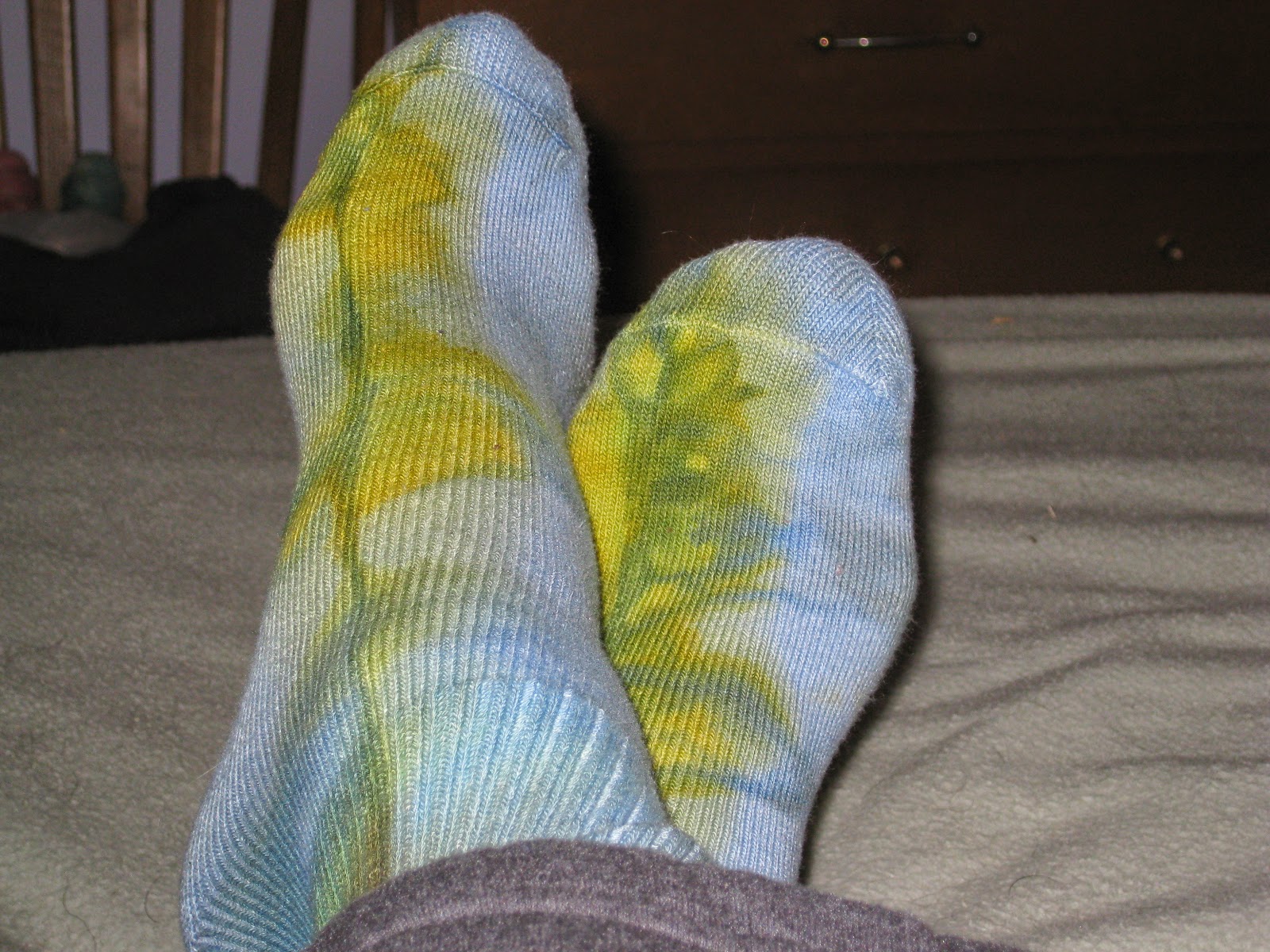 These are my new socks - bought at a great craft sale on Saturday. The vendor told us they are
made from bamboo with a little elastic.
They are really soft and feel good on the feet!
I've heard they are making flooring from bamboo.  Anything to save the trees!
Posted by marlu at 4:37 PM 1 comment: 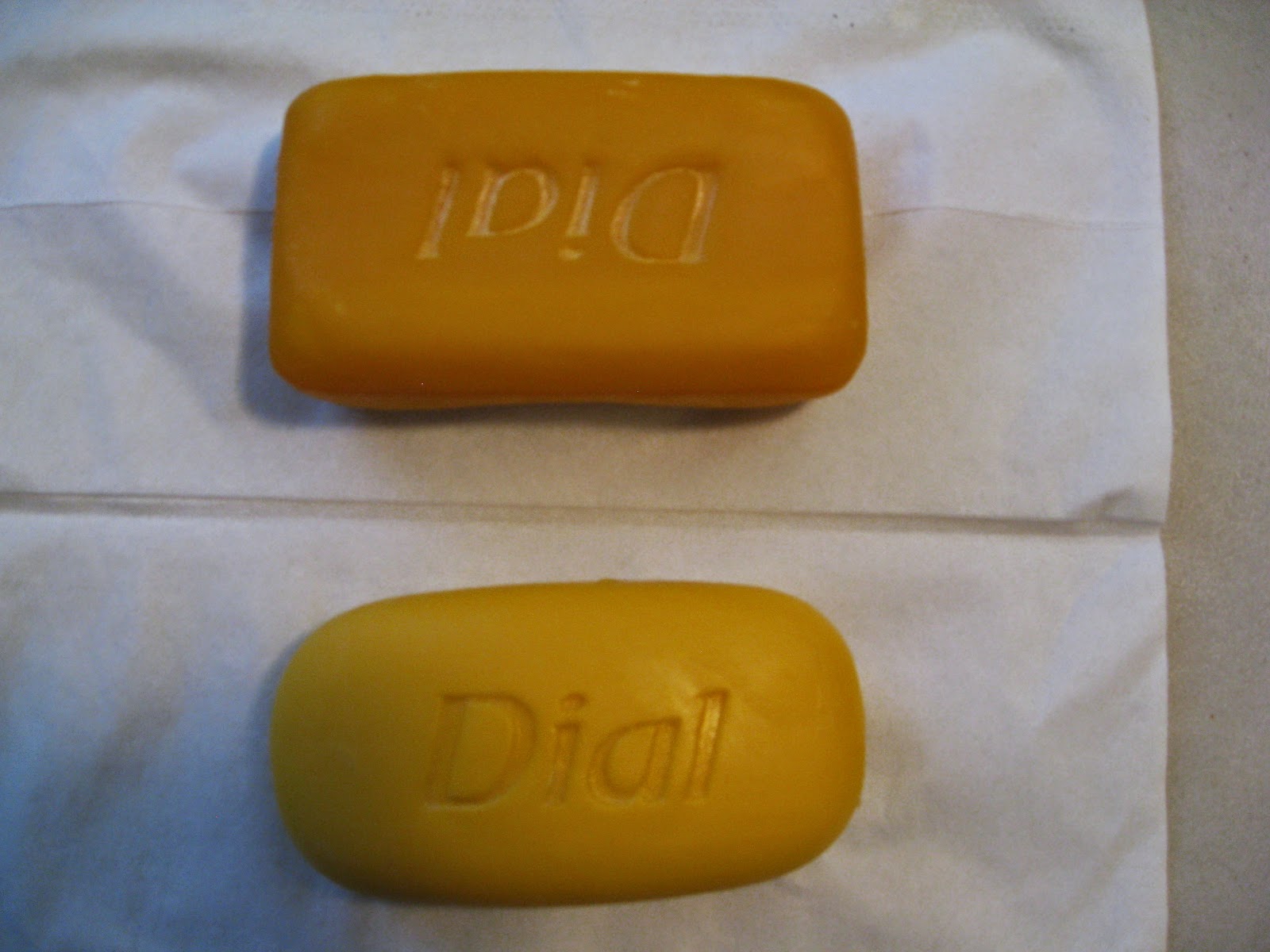 When we are expecting guests, we buy new soap, usually several bars. The top (upside down) bar was one I had just opened about a week ago from a previously purchased  box. When I opened a new package to put out fresh soap, I realized the size was smaller! Yep, I believe they didn't raise the price; they just shaved the product. Result? Raised the price.

I'm not picking on just this one brand - it happens everywhere.
Posted by marlu at 9:43 AM 1 comment: 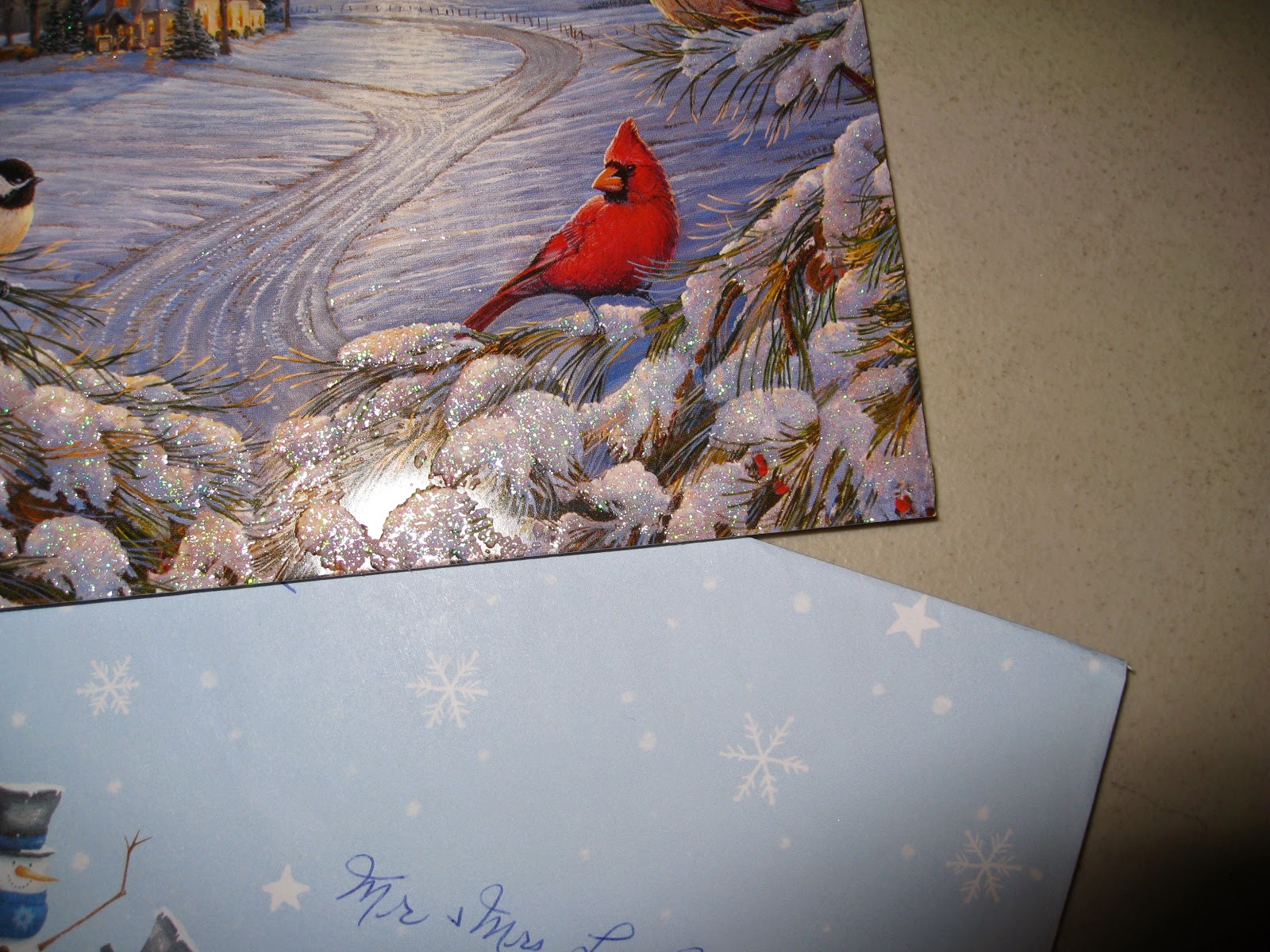 We like to receive cards from old friends that we no longer see because they live in other
parts of the country.
Today we received this beautiful card. With no stamp. It was post marked in the lower left hand
corner of the envelope over the snowman. I am surprised there was no postage due,
or that it was not returned to sender.
Wonder if I should have tried that on a few. 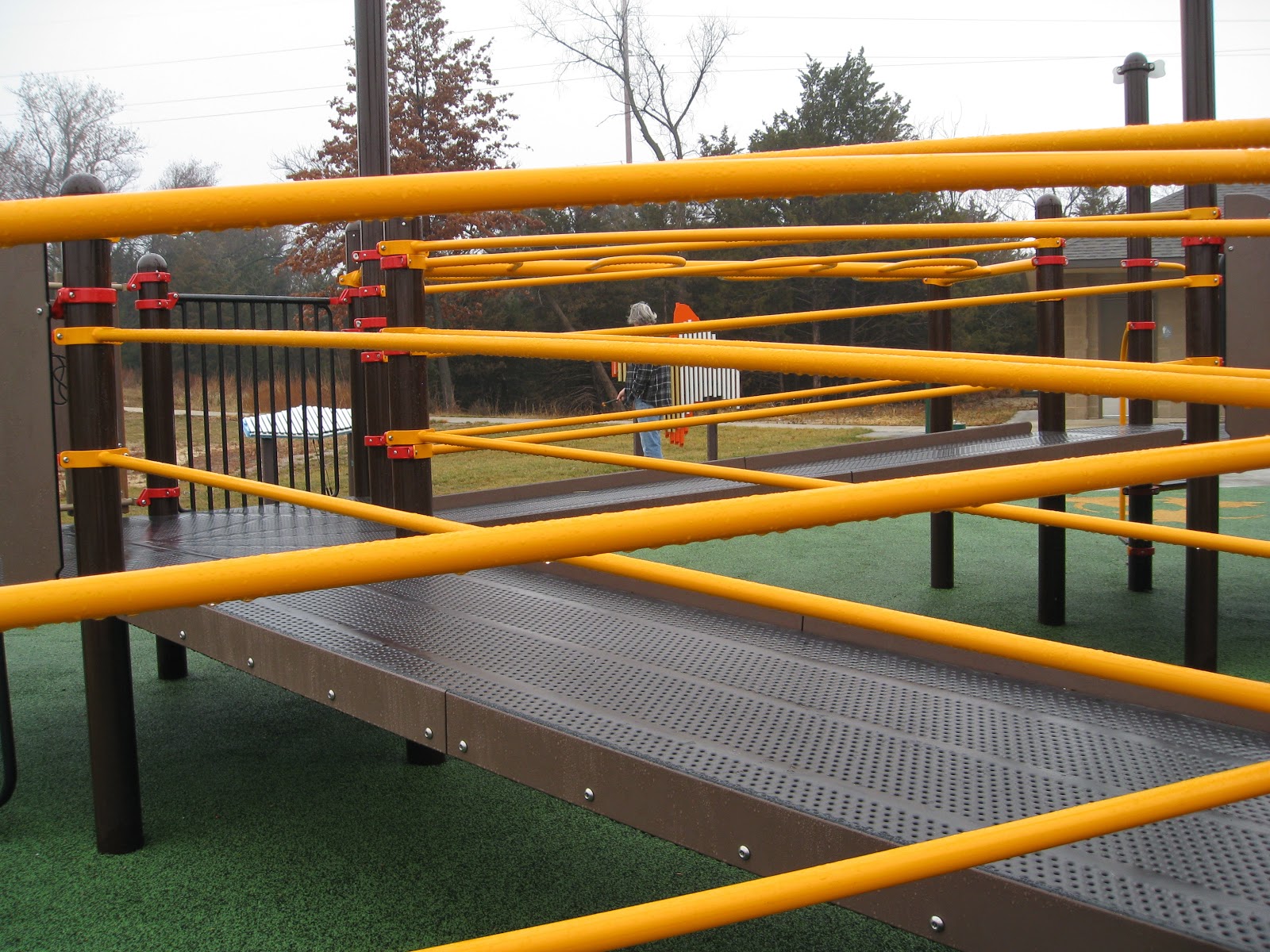 We had visitors from the south and warm weather was here so they didn't freeze while celebrating a
birthday and Christmas.
We took the big girls to the little kids' park and they were impressed! Their dad is in this
photo since I didn't get their permission to post but it was a lot of fun.
Posted by marlu at 5:41 AM No comments:

We will have some family here this week-end. Wish both branches could be here!
A friend asked if we were all ready for company.  I told her I mopped the kitchen floor - does that count?
Posted by marlu at 3:19 PM No comments:

Why Do They Do It? 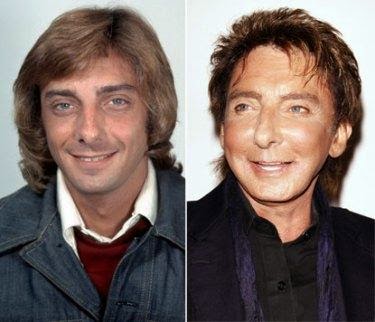 Found in a series of well-known folks who have had surgery.
Sad that most entertainers feel they have to remain "young" looking
to stay popular.
Personally, I prefer Robert Redford's look and even Clint Eastwood's wrinkles
to the smooth, false skin.
What's wrong with looking sixty-eight?
Posted by marlu at 4:14 PM 2 comments: 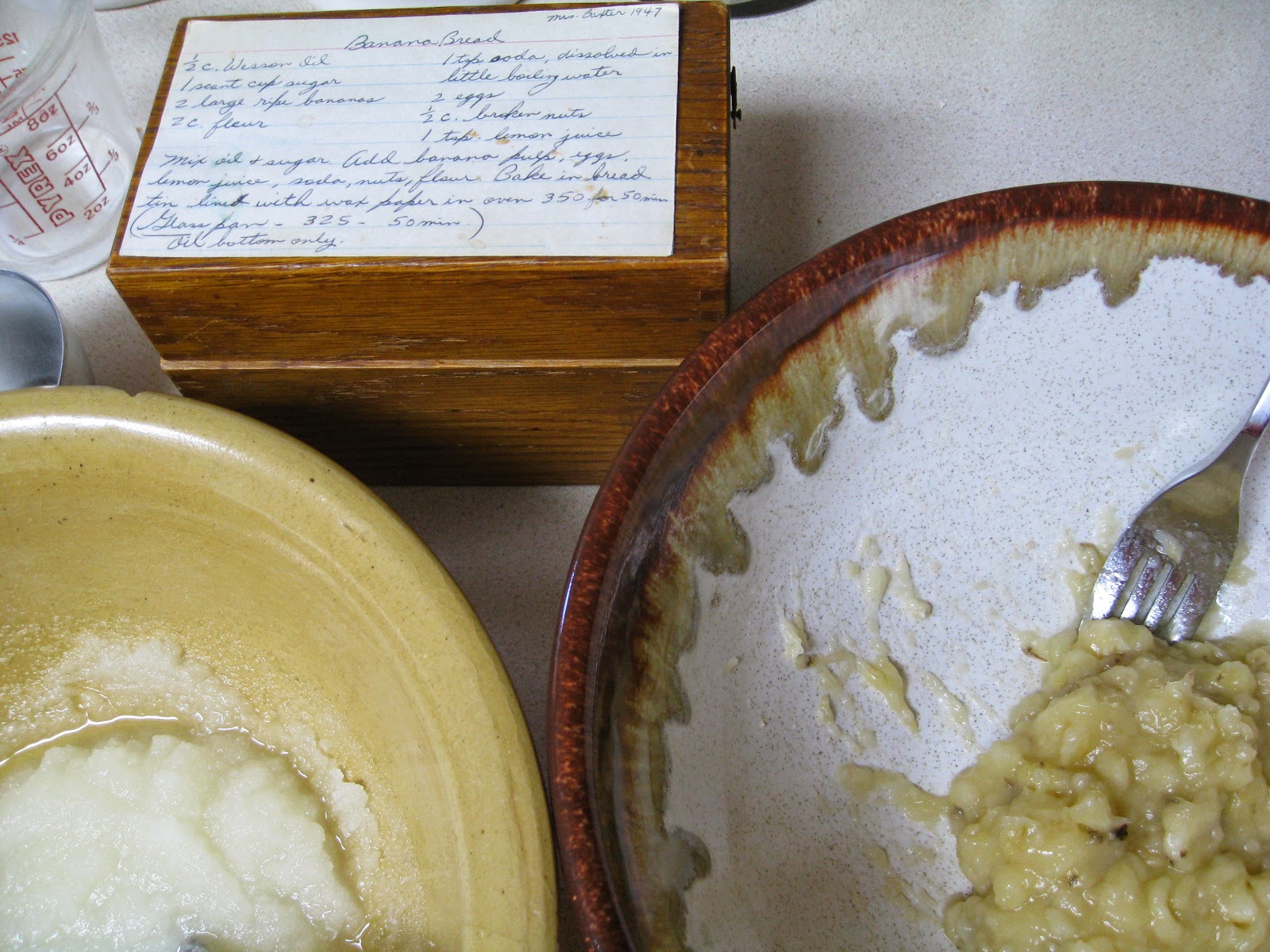 So yesterday was bake banana bread day. I have had this recipe for a long time. It was given to me by a high school friend who lived with her grandmother. So Mrs. Baxter must have been at least 60 in 1947. *
It is an old recipe.     ( I do not put wax paper in the bottom of the pan.)

*I searched for Mrs. Baxter's husband on the internet because he was a park commissioner in our town and found HER obituary...She was born in 1886 so was 61 in 1947. It's amazing what you can find when looking for something else.
Posted by marlu at 6:42 AM 3 comments: 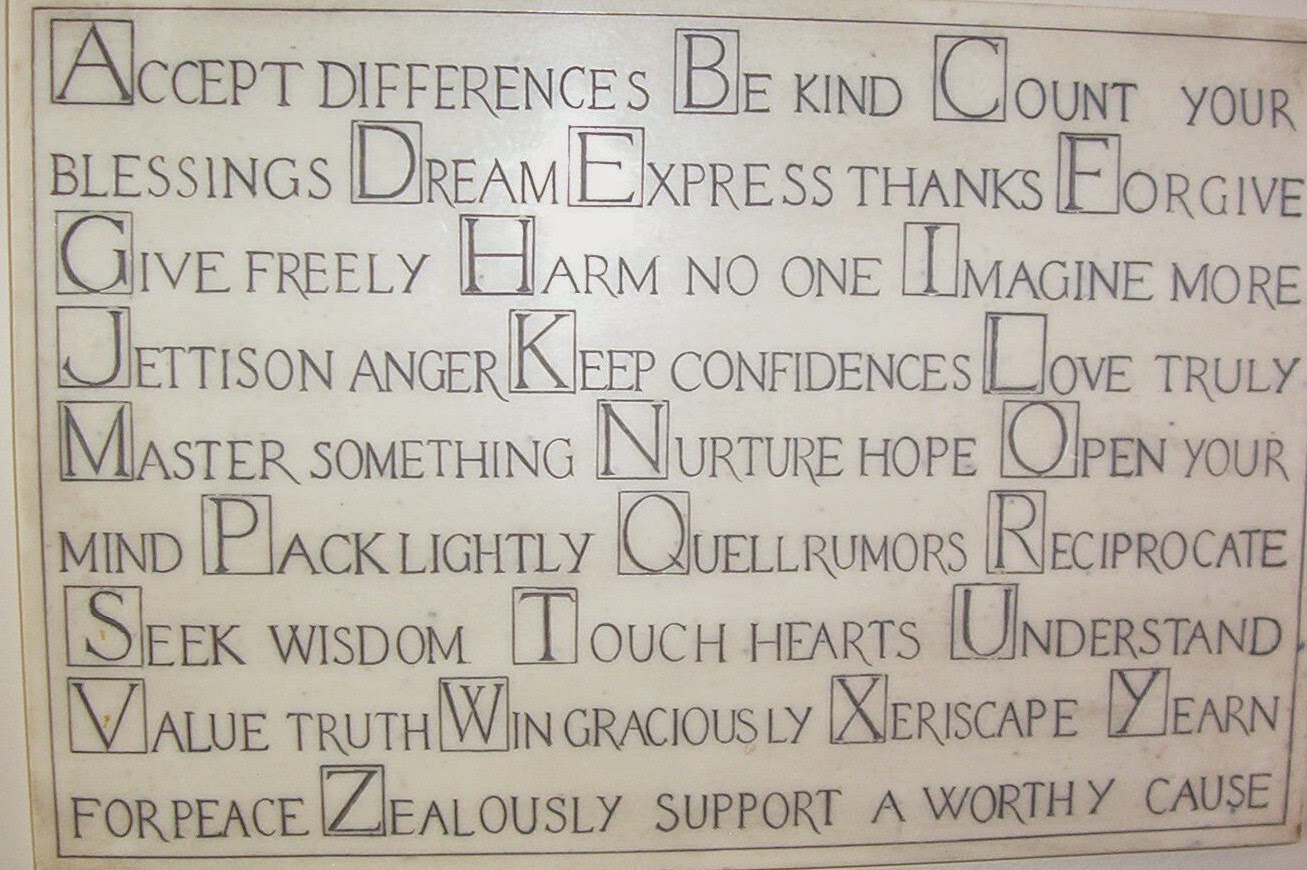 Advice I'm trying to follow.
Posted by marlu at 12:36 PM No comments:

Today I was encouraged (!) by L. to place an order over the phone for a Christmas gift. I thought it was a little early but they would probably ship it whenever you wish, right?

So I called the number and reached a person who seemed to speak and understand English as his first language. I told him I wanted to place an order. It pretty much went downhill from there.

He asked the questions and I answered with only the information he requested. Then he wanted the identification number on the outside of the catalog. I told him this was in a newspaper ad and I had a source code. Long pause. He asked me if I could hold for a sec. Yes.
Several minutes with Christmas carols and he returned. He started from the beginning although I had already told him the friend's name, address, item number, my name, address and item and email.
With many apologies he back-tracked and seemed to insist that the address had to have a Drive, Avenue, Street or Road on the end of it. It does not. I was patient and answered each thing he asked, twice. As for the date to ship, Christmas or as soon as possible? I thought I'd make it easy. As soon as possible.

After almost twenty-five minutes, we concluded the deal and I hung up. Dear L. said, "I would have hung up long ago."  (I said that I knew that!) Everybody has to have a first day at a new job and maybe this was his. I just can't see ruining somebody's day by being impatient or hanging up. I really believe he was doing the best he could and I know he had a script to read the right phrases - asking if there was anything else I wanted to order; thanking me for my order; wishing me season's greetings etc.

Usually I'm not this patient. Maybe it's the Christmas spirit. But I felt like he was really trying and he was not rude. Just a little confused.

When a clerk IS rude or has an attitude, I CAN ruin their day.
Posted by marlu at 4:20 PM 1 comment: 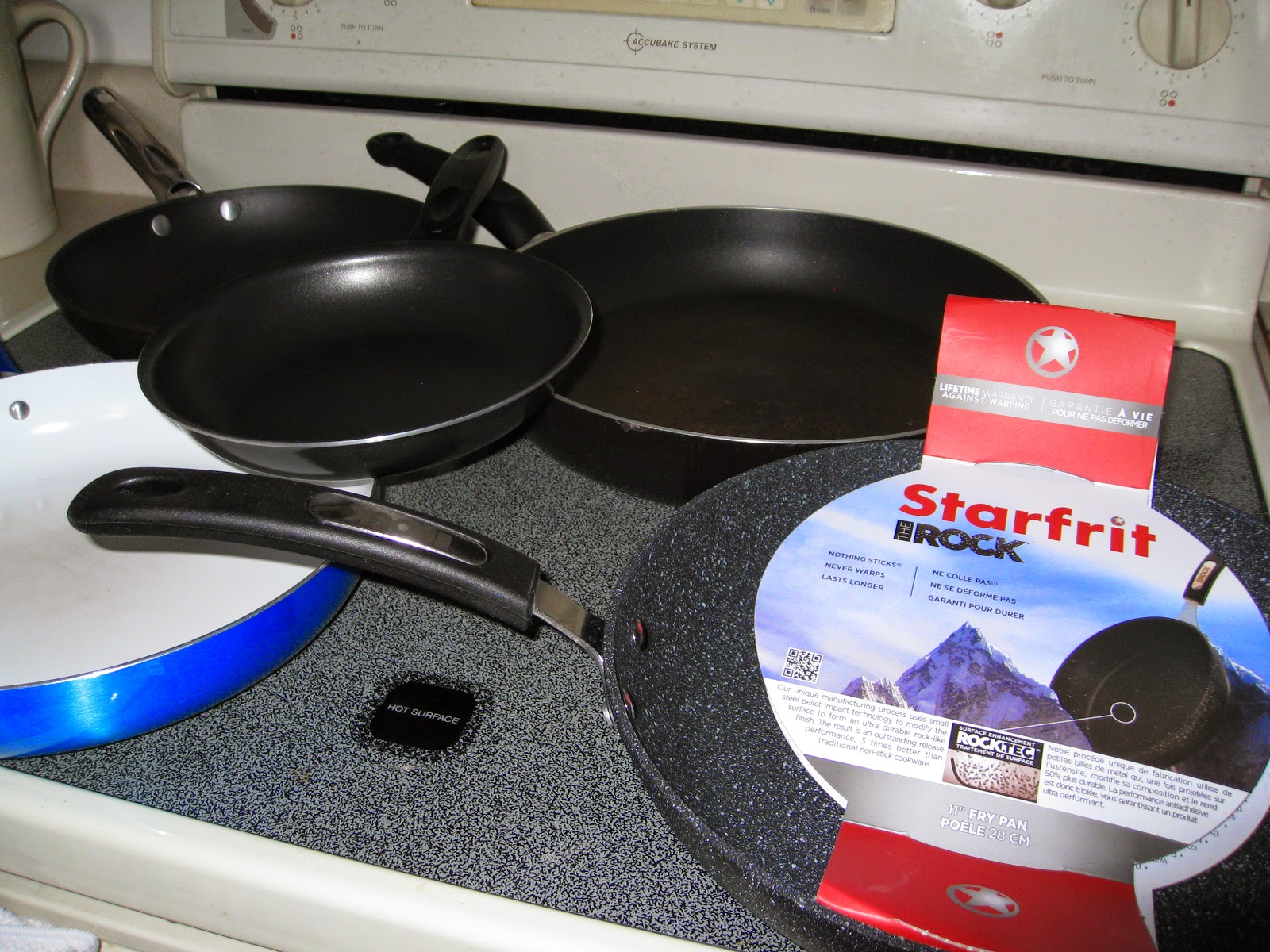 Since 1952, we've gone from a United States product, "I just love Revere Ware," to skillets of T Fal , skillets from France, Indonesia, and now China. The newest is the Chinese Starfrit which is supposed to be stick-free but has a rough, textured surface. We'll see.

Could it be my cooking skills or lack of them that makes the pans no longer stick free?
Posted by marlu at 12:40 PM 3 comments: 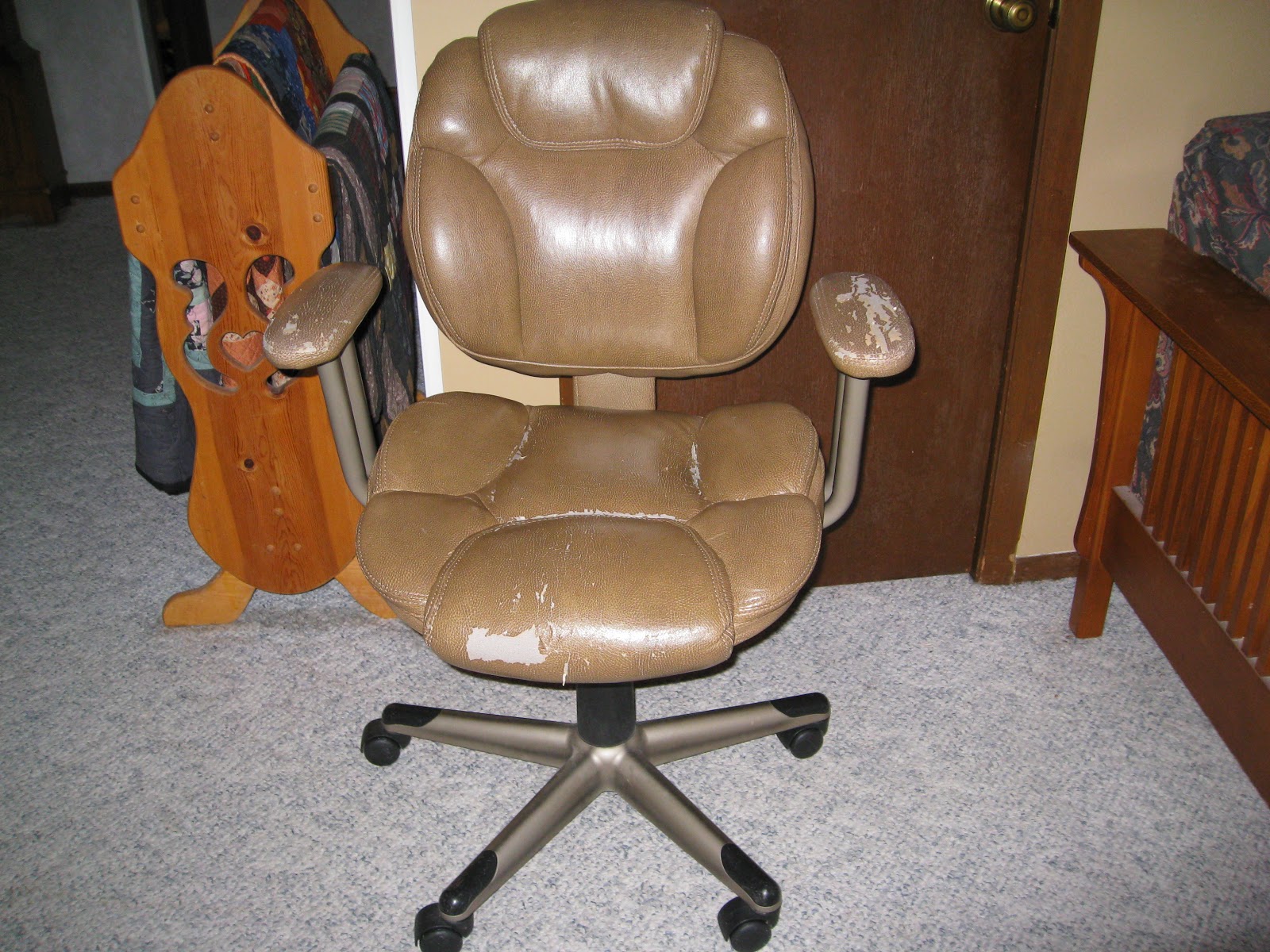 My old desk chair was peeling. Looks very tacky but who cares? Nobody sees it but me in the back bedroom/office. L. cares. So for an early Christmas we shopped for chairs today. Anybody want a peeling, fake leather chair in a speckled tan shade?
Posted by marlu at 5:30 AM 1 comment: 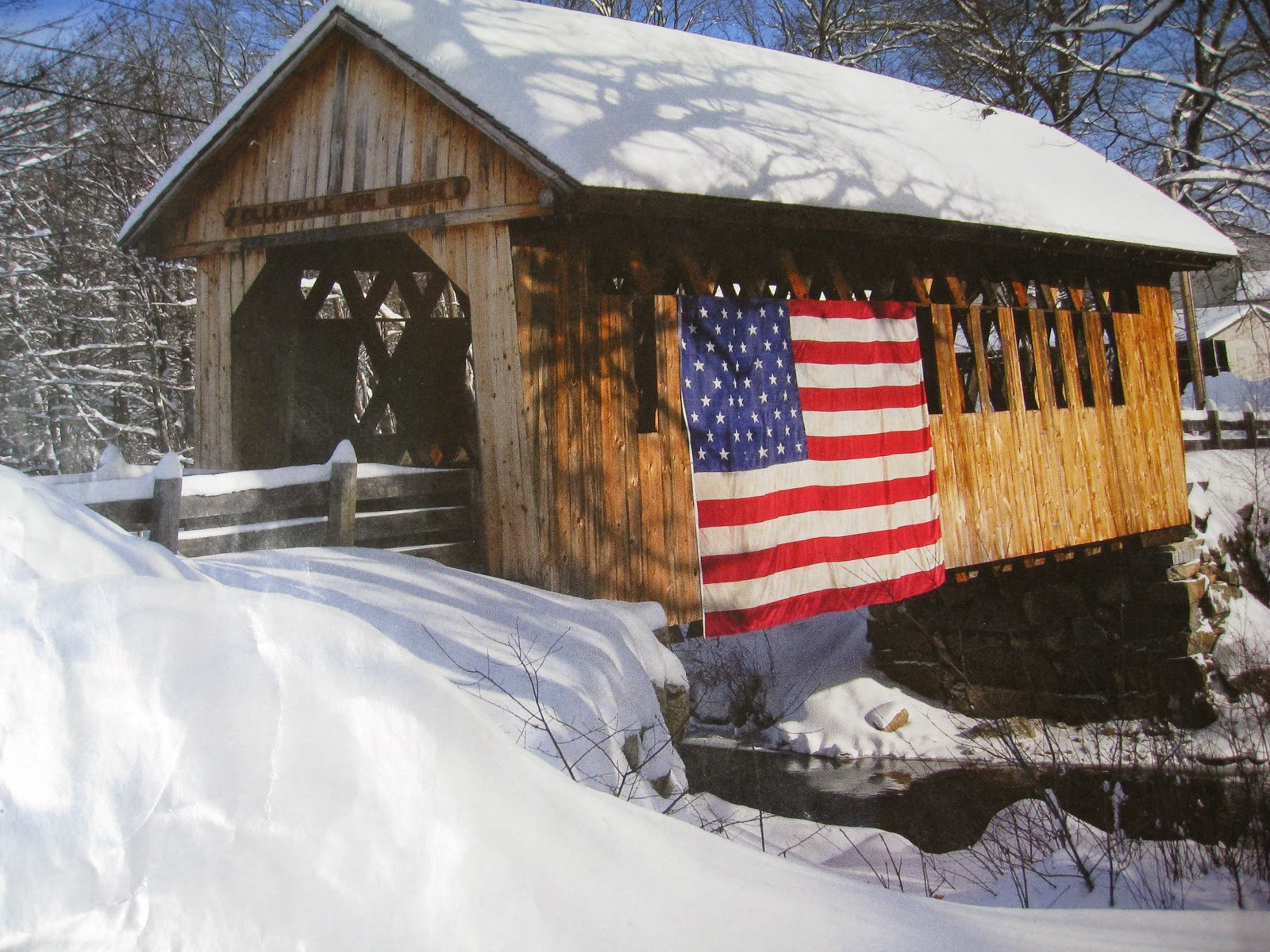 This picture is from the calendar of the NLEA. I support them totally when they are right and remember that anyone can make a mistake. But, we do need to be sure that training is of the highest caliber.
And if protecting the public results in an action that you believe was wrong, it does no one any good to destroy property. Peaceful protests are not a place for a  mob to commit criminal behavior.

That's all from my soapbox for today.

And I really liked this photo. I wish I could give credit to the photographer, but there was no name given on the page. 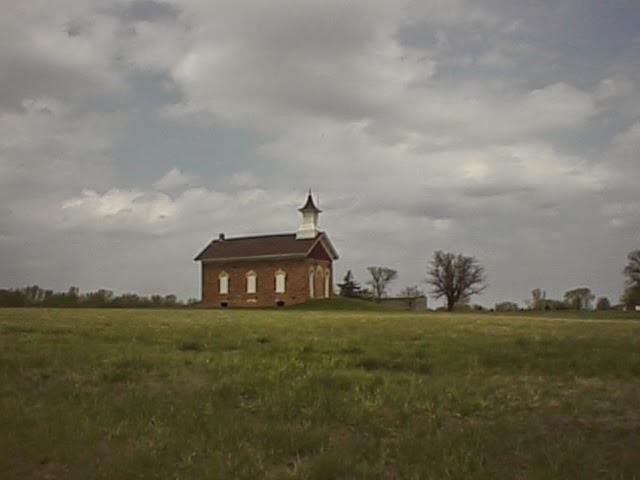 This school house is abandoned and is located somewhere near Emporia, Kansas.
Posted by marlu at 7:18 AM No comments: