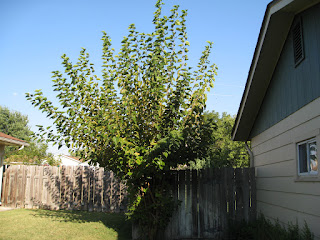 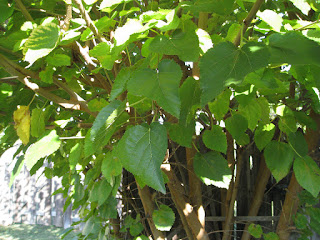 This tree was growing next to our fence. L. cut it off several times at the ground but it kept coming back so a few years ago he let it grow. We have no idea what kind of tree it is.
Posted by marlu at 3:21 PM 2 comments: 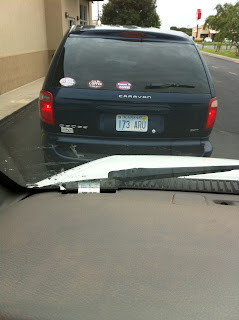 At this very drive through we stopped yesterday to order some lunch. This photo was taken months ago but yesterday while we were ordering, an older, brown car whipped around us and stopped behind the car waiting ahead of us for their order. I had never been "cut in" at a line to a drive-in! When the intruder reached the window, there was a long delay. My better half suggested just leaving. I would not do that to the work crew who seemed to be having issues with the woman in a hurry. After two discussions with two different workers, she received her food and left. As I parked by the window, the pleasant lady said, "I want to confirm your order," and read it to me. Yes, I said. Then I explained what had happened. They, of course, didn't realize what had happened and added her "window" order to our order, thinking she was just getting an additional item. They had added the two amounts and it seems she did not want to pay for ours! This took some time to sort out and the crew was amazed. I don't believe this had happened to them before. We had a laugh (and a subject for this blog.) Some folks have a lot of guts, nerve, boldness - whatever you want to call. Later a friend told me she saw this happen at a McDonald's. In her case, the car was from a neighboring county but our lady was local. Speaking of the Golden Arches, one of ours has a double drive through with two ordering windows and the cars merge after ordering. We have never seen anyone try to sneak across the line!
Posted by marlu at 8:32 AM 1 comment:

Another Mother for Peace 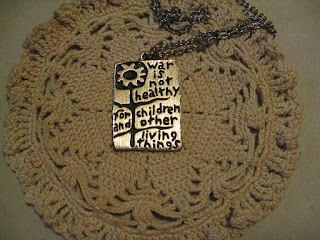 Purchased in 1968 after a group of women in Beverly Hills, CA, started an organization
to promote peace.
Still appropriate.
Posted by marlu at 9:04 AM No comments: 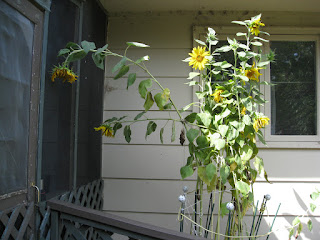 This shot reminds me of the phrase, "Let my people go."
Just because the sunflowers grew so tall, someone was afraid they were going to bend over. I think
that is what nature intended. These are not grown in a field for harvesting.
They are not the hardy plants that produce those wonderful seeds.
They were just fun to plant and see them grow.
Posted by marlu at 11:17 AM 1 comment: 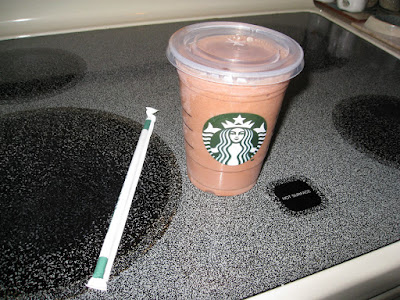 Who knew that Starbuck's has Smoothies? I saw it on the internet. So we decided, after a trip to the bank, to try a couple. I told the clerk I understood they have smoothies. He said yes. I told him we wanted two. He asked if I would like a chocolate croissant. No thanks. He gave me the total for one Smoothie...$4.64. I said I wanted two. He said something else about the order and I said, "Two." Again he said, "$4.64." I told Lee, I think we are getting one. We'll just split it." Went to the window and a female barista took my card. She was replaced by the young man who had taken the order. He was visiting about our day. I told him we are very happy but we did order two smoothies but don't worry, we'll split it. He was apologetic and asked if we wanted to wait for another one. "No thanks." And then Lee handed me the tip for the jar. The guy said he didn't want to accept it. In fact, he reached out and pushed the lock button on the van door signifying that he didn't want us to tip. I told him that we always tip and that we love Starbucks. I think this was a lesson to baristas everywhere. Listen to the customers before you try soliciting add-on items to the order and for me, make sure you get a confirmation before you drive to the service window. These little occasions make life so interesting.
Posted by marlu at 9:16 AM 1 comment:

I was thinking yesterday that I don't hear from many of my friends. We've always had the phone but now emails are so past tense that we don't use them much anymore. There is texting which I do with our sons and granddaughters but not with friends. When I mentioned all this to L., he said, "Do you ever call them?" That shut me up.
Posted by marlu at 7:43 PM No comments: 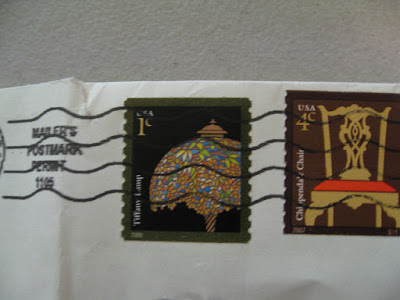 I found these stamps in a drawer when I was looking for something else. Why did I save these? Because of the Tiffany lamp or the chair? Maybe because someone was able to mail a letter for only four cents. That must have been a bulk rate. When I was a kid I had a stamp album. Wonder whatever happened to that? It was fun thing to look for unusual stamps and especially from another country.
Posted by marlu at 1:17 PM No comments:

Out and about earlier this morning to buy spider spray. There are too many webs where we want to be. On the way back home, we stopped at the Golden Arches and ordered L. a large chocolate milk shake. $3.49. Please pull forward. Fourth in line we arrived at the window and paid. Pull forward to serving window. Clerk says, "You wanted the mocha with no cream?" No, a large chocolate milk shake. "Oh. We can't do that now. Could I get you something else?" "I'll take the mocha." "No, that's for someone else." "No, just my money back, I guess." "Please pull forward." In my rear view mirror I saw them hand out another mocha with no cream on top to the lady in the following car. They could have given that to me instead of dumping it! When the apologetic young man gave us our money, he explained the machine wasn't working - the reason they couldn't "do that now" was not the hour of the day (10:00 a.m.) I told him they might tell the order taker that! She obviously didn't know about the malfunction. Another day in the life of little inefficiencies because of our dependence on machines....even milk shake makers.
Posted by marlu at 8:25 AM 2 comments: 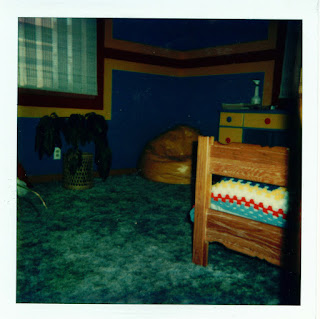 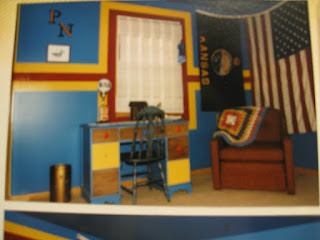 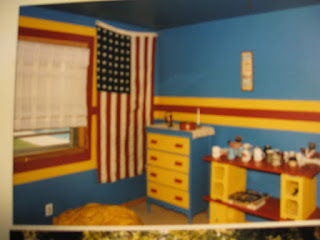 I was never into decorating a room or knowing how to stage a place to prepare a home for a sale. Our younger son used his skill to fix his room the way he wanted it. The painting came first - a shiny finish in bright colors. The flags, the bureau and the desk with a blue shag rug and a yellow bean bag chair. His mom helped by making a bed cover to match in the granny square pattern. Later it took three coats of ecru to cover up the red, yellow and blue. We loved it but changed it after he was off to college. The activity here is limited to in the house. More heat than we'd like outside with high 90's is continuing to the end of the week. The state fair starts next week so there may be some rain by then! But while staying inside, I've been crocheting the last of four afghans for the grand girls.
Posted by marlu at 11:28 AM 4 comments: