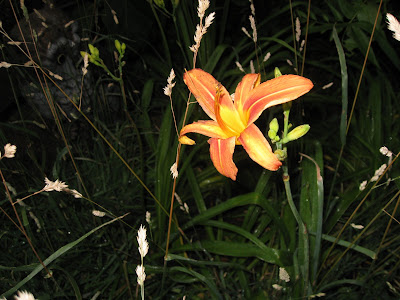 A trip to the barbarshop and then to Petco. That was our big trip out today. The excitement is so exhilarating.

Later, after the mail came:  On November 10th I mentioned we had to send some money that the government said we owed.....
well, today they sent us a check back for what we sent them the tenth  plus .14 interest.
Wonder who is confused. 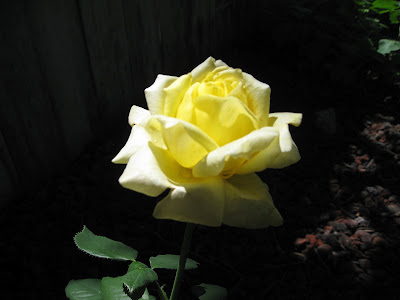 Since there is nothing going on here except a trip to the dentist, a trip to the clinic and watching puppies, I looked up a picture I particularly like. 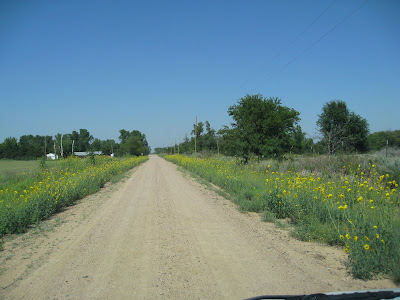 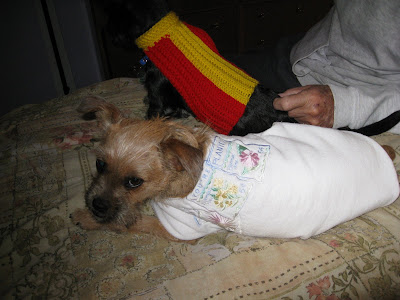 We tried on the dog coats this morning.  The white one is from an old sweatshirt and is too big for Jill. The red and yellow one is crocheted and almost too small for Jack.

Lee and I saw an ad somewhere for a "calming" wrap for a dog.
I had never heard of such a thing but guess what?

These do the job. Jill, the lively one, never moved after we put it on and Jack also just lay there, happy or subdued - not sure which.  What a concept.  Sort of like swaddling a newborn baby.

Mom's Thimble and Her Sewing box 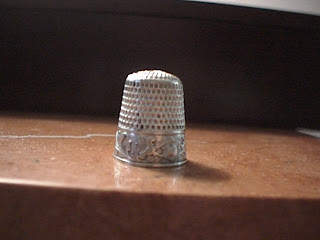 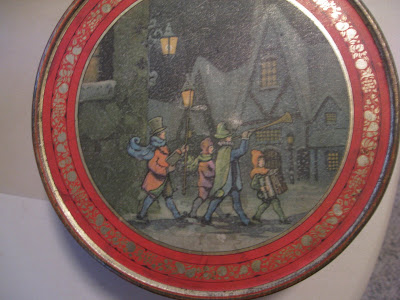 I love the picture on this metal box. The mark embossed on the bottom says "NBC Uneeda" and I wonder if that means National Biscuit Company. I have no idea what it contained when it was new. I just remember my mother using it for needles, thread scissors and her sterling silver thimble.

Hiding out in plain sight 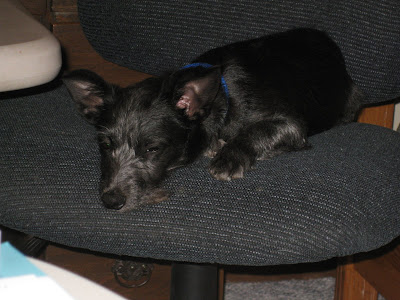 One of the pups was missing. We looked all over the house and in the backyard. We finally found him - camouflaged on the dark chair in the room with low lights.

We had a great day; the sun was out and it was springily warm.

Meat loaf, green bean casserole, baked potatoes, cranberry sauce (for me only!) and  pumpkin pie for our feast.

A lot to be thankful for plus three phone calls wishing Lee a happy birthday from our two sons and his sister.
Posted by marlu at 6:43 PM No comments: I haven't tried to place it on an actual pup which right now is a wiggling, toothy mass of hair. The way things are being chewed around here, I'm sure those teeth would make short work of the yarn.

So far, both dogs seem to enjoy being outside, even when it is very chilly. And then there is today which is like a spring day at 67 degrees!

We had some sunshine after .03 inch of rain.  We are fifteen inches behind the average for the year. Not good.

The pups saw the veterinarian today for the last of the puppy shots. They are not liking the car rides. Maybe if the destination were someplace fun instead of a place for shots . . .

They can now go to the city dog park since they have their rabies shots. That should be quite an experience.
Posted by marlu at 7:02 PM No comments:

A trip to the lab for blood withdrawal was the only reason to be out and about. It's very chilly but they are forecasting a warm-up.

Progress on pups: they are training us to take them outside but they have both learned to use the doggy doors with heavy plastic. Jack "got it" right away but Jill had to learn with a half door of thinner  plastic for several days.

Each time they return from the yard, one or both brings in a lava rock or a river rock. We are hoping they don't swallow them. They have all kinds of stuff to chew on (toys and L.'s hands) but seem to prefer rocks.
Posted by marlu at 3:15 PM 1 comment: 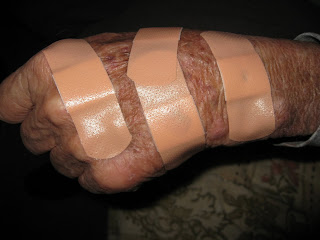 We're calling him "Band-Aide Man."
Posted by marlu at 6:16 PM No comments:

Are those satin sheets? 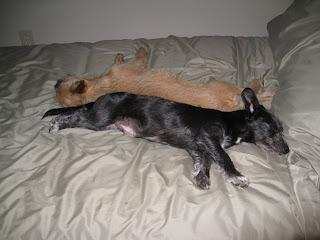 Where do germs come from?

I have hardly been out of the house (except for coffee on Monday) and I have a cold. I wash my hands, drink lots of water, try to eat sensibly (!) and a head cold has struck.

Trying to get over it here -
Posted by marlu at 6:09 AM No comments:

I was thinking about old "sayings" that I never hear anymore after reading a blog about that subject. The example was pin money. Many of those who commented had never heard the term. They mentioned milk money and mad money.

My example is something my granny used to say - shank's mare.  I wonder how many people have used or heard that term lately.

My dad used to say our bathroom wasn't big enough to cuss a cat in.....I always thought that was funny. How much room to you need to cuss? He also said that  since I had long legs, I looked like a "shyed poke."  I don't even know how to spell that one. Shied?

A tow headed child - I remember thinking my mom must have meant the kid had a head shaped like a toe.

The weather is so springlike it must be affecting my memory.
LATER:

After using google, I found shite-poke.  Here is the explanation in a quote from someone else looking for the origin:

Finally, I tried Google. Up popped a nature writer’s blog on a green heron, including a photo of a specimen in the process of unloading a large deposit of, shall we say, nature’s fertilizer. She commented that the photo was particularly appropriate because a common name for the bird is shite-poke, which is an old-fashioned way of saying “bag [poke] of excrement.”
No German there. Just some good, old fashioned, earthy American English. Apparently our ancestors named the bird based on what they observed.
Posted by marlu at 2:41 PM No comments: 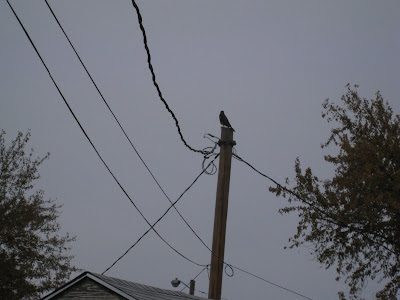 While I took a short nap (tired from all that cooking yesterday!)
Lee spotted this large bird on a power pole in the neighbor's yard. We can't tell what it is but in one shot that I can enlarge in Picasa (but not here) we can see some pretty impressive claws.
It must be some kind of hawk.
Is a kite that large?  We need a bird book.

Aren't all the wires that we need so desperately just "arty?" Too bad we can't bury them and prevent outages from ice, wind and lightning.

A Day of Cooking

There are some days that I just don't feel like cooking.

And then there was today. We have an eye of the round roast in the slow cooker with taters, carrots and onions; we had beef stew with taters, carrots, onions, beer and thickened with flour, for lunch with a crusty cheese bread (brought from the store! Not baking yeast bread this year.)

A loaf of banana bread out of the oven because we had three overripe bananas.
In the fridge are green peppers, beef strips and onion for Chinese Pepper Steak. 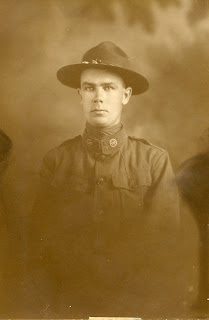 Too late for Veteran's Day - This is my uncle who served in WWI. I do not know anything about what regiment etc. When I was young I wasn't interested in those things and now there is noone left to ask. Perhaps it can be found on Ancestry.com.
Posted by marlu at 11:59 AM No comments:

Nothing gets your attention and brightens your day like a letter from the internal revenue service.

We tried to tell them two years and eight months ago that they sent us too much money. Phone calls by the accountant, letters and they knew nothing about it.

They discovered it sometime this month and sent a letter asking for said overage.

It's in the mail. At least they didn't charge us interest.
Posted by marlu at 1:26 PM 2 comments:

We are having some wonderful rain. Keeping up with two new puppies is keeping us busy. Today Jack was missing. We knew he was not outside. We heard him bark and thought he was under the bed. This would have been a good trick because L. put boards around the bottom to keep former boarding dog, Mork, out from under.  No more barking and no dog.
Finally L. remembered that he had been in the closet. Open the door and there he was with the handle of a mesh clothes bag wrapped around his neck. Not tight but numerous wraps.
Wonder if he was too scared to bark more when we kept calling him.  Very scary!

I know one thing.  These puppies have gotten me up and away from the computer....
Posted by marlu at 12:44 PM No comments:

Two quakes in one day and it seems I missed feeling both of them. The last earthquake I remember hearing about, and the only one I have experienced, was in the spring of 1952. I was in a boring education class on the top floor of the ad building at KSTC in Emporia.

The glass in the door was rattling and my chair was shaking. My thought was the football player behind me was pushing on the rung of the chair - but what about the door? The prof went over to check if someone was wanting to come in but there was no one there. Maybe a boiler had blown up four floors below?

On the radio news at noon, we learned there had been a quake. That was the first time I was aware we were near a fault line in eastern Kansas.
Posted by marlu at 5:40 AM No comments: 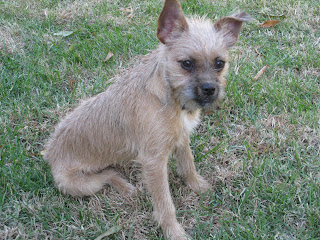 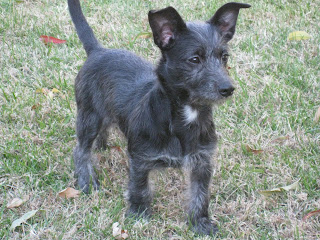 The new pups at our house.  Formerly known as Walter (the brown female) and Loca (the black male), they now are known as the very original couple,  Jack and Jill.
[ How do they pick those names at the shelter? Walter for a female and Loca (Spanish for crazy female) for a male.]
So our time is now taken with careful watching, and frequent outside visits.
Posted by marlu at 10:02 AM No comments: