Today I turned on the oven to bake a tuna casserole. I thought I smelled something burn-like!

It seems I hadn't opened the oven door since Thanksgiving. That was the day our wonderful granddaughters were the cooks. It may be that basting the turkey and returning it to the oven was the origin of some baked on "stuff."

Since the oven was hot, I decided to just wait till after the casserole was cooked, the oven was cooled and we had eaten lunch to clean the blackened broth.  I should have taken a photo! Anyway, with Bar Tender's Friend and a lot of elbow grease the gunk is gone.

I'm finding it harder to bend over and scrub. Wonder if my age has anything to do with that.
Posted by marlu at 12:25 PM 1 comment: 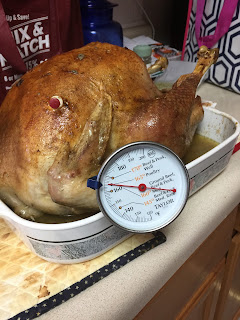 Outside it was 81 degrees. A very unlikely Thanksgiving temperature.

Wonderful day and food and family - still missing the ones not feeling well and the ones far, far away!

Today is my husband's birthday. We had family from Texas arrive with the whole Thanksgiving dinner on Wednesday afternoon plus an ice cream cake with a big eight seven on it!

The girls fixed all the food and we ate at noon! Their mom was sick with a cold and didn't make the trip. We missed her and our other family that lives in Oregon!

We are blessed to have had a family that gets along with no major problems. (I'm speaking of the time frame After the teenage years here.) I think we all really like each other. If that is not the case, we are all hiding it quite well.

After two boys, we love our four granddaughters - especially since they are past that screaming age that little girls seem to go through! (I told me sister-in-law that I don't remember screaming as a kid.
Wonder if I did before I can remember.)

This is sort of a silly blog but I'm feeling very blessed here. The only problem - Texas and Oregon are so far away from the middle of Kansas.

And Lee was thrilled that we had the guests and talked to our other son by phone. 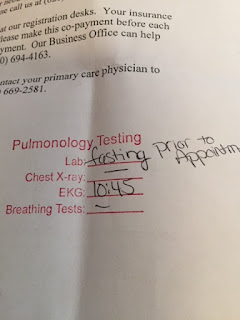 Lee had an appointment with the doctor on Wednesday. He got his lab work done on Tuesday. At 10:40 we reported to the receptionist at the EKG department. No record for him to have any test done. Repeated the unusual name, spelled it, repeated date of birth and still no record. She asked for help from another clerk and they found the problem.

It was supposed to be an x-ray. "Someone just wrote it on the wrong line." Thanks for finding it. We were two floors away from x-ray. Even with an elevator, it's a struggle to walk for any distance. We just simply blew off the x-ray.

The doctor's receptionist asked if he had his lab and x-ray done. Yes and no.  Our doctor didn't ask any questions so maybe the x-ray wasn't so important after all.

I know everyone makes mistakes. I make my share but it is so amazing how many errors are made in the real world. I think I'll try to stay out of the hospital.
Posted by marlu at 11:35 AM 2 comments:

Lightning may strike today. We are supposed to have sunshine for the first time in over a week. And, I got up and actually accomplished something before seven o'clock.

And I woke up at 5:00 and decided I needed to get that stew meat browned and the stew in the slow cooker. After my shower, I browned the meat. (To flour or not to flour for browning? I even googled it.) There are two opinions so I tried the opposite of last time we had stew - no flour.  We'll see if there is difference! Chopped celery, onions, garlic (ok, it came out of a jar) potatoes, carrots and threw in a can of diced tomatoes and a can of beef broth. Should be ready by 1:00 p.m.

At 10:45 e have a doctor's appointment for Lee. That's always fun. Our doctor is a great guy and we see photos of his Mastiff - Lee loves BIG dogs and we have two small ones now. He likes them but I know he wishes for a Great Dane again. During our years together we've had a Boxer, Mac, a Bassett Hound, Duffer, four Great Danes, Bruno, Brutus, Beauregard and Zeus - one at a time, thank goodness, a rescue, Wally, and now Jack and Jill. also rescued. That's nine dogs in sixty-five years.

We also cared for a few, temporarily. Chip and Ernie, Schiz, Belle, Mork and Ingrid.

Nothing much happened today except one of my computer "programs" that I like to use everyday is giving me fits. I don't know if it's their problem or mine but it sure is frustrating. I guess I'll try it tomorrow on the iPad and see if I have any difficulties there.

We did take a trip to the grocery store. A cloudy day (again) but about 51 degrees. The thing we discovered is that Sunday afternoon is not a good time to shop. The market place parking lot was full and so was the store. Isn't it too early to buy for Thanksgiving?  It is not on my schedule at this time.

No ads yet by the grocer to purchase their turkey meal deal as in past years. Maybe it wasn't popular (or profitable.)  I think I'd rather have a ham anyway

While moving a bunch of "stuff," I found some books I had forgotten I owned.

One is "Unkempt Thoughts" by Stanislow J. Lec. Many of the quotes are over my head but some strike a chord!

This probably will be considered political. I take no position on this but it references some actions we have seen lately in our country.

This is the one that really got my attention:

When smashing monuments, save the pedestals - they always come in handy. 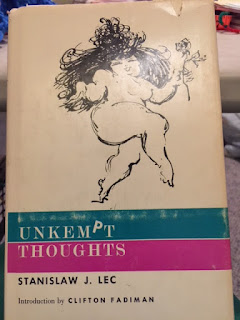 I watch too much television. Too much of the news channels. It seems that every fifteen minutes the words Breaking News appear. Sometimes there is an actual news item. Sometimes not.

Lately it has been stories of men harassing or abusing women.

And today we learn that the United States Congress finds it necessary to hold training sessions for its members instructing them that it is not ok for them to take advantage of women or young men.

I am pretty sure that none of the parents of these grown men ever thought their offspring would  engage in such activity. Maybe their dads were not great communicators on telling their sons to behave themselves. Perhaps their mothers thought it was just an unspoken fact that to be an honorable person one did not treat women in that manner.

I don't know what the answer is but I would think men from the age of thirty-something on up to the age of the eighties would have figured it out but evidently some of them have not. 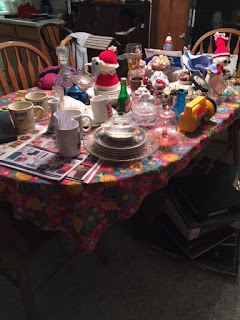 This is the table full of contents from the china cabinet.

All because of a burned out bulb.  At least the shelves were dusted today.

Note to self: Do not place china cabinet so close to wall that one cannot reach the plug for the light.

Yesterday I remarked that the sun was out and I would be able to tell when it got dark. (I really meant what it looked like during sundown.)

That all changed when the clouds came back and we had a dreary evening. Same today.

It would be nice if there were some moisture with all that cloudiness.

I just watched a movie from 1939 with Bette Davis and Miriam Hopkins. Two of the main players, Bette Davis and her daughter (born out of wedlock! Horrors!) were named Charlotte and Tina.

I kept thinking those names were used in Now Voyager for Davis (Charlotte) and Paul Henreid's daughter (Tina.)   What a weird coincidence. So I had to look it up on www.imdb.com and sure enough, those were the characters' names. I wonder if that was intentional?

Such minor stuff occupies my mind while I crochet and try to avoid the news.
Posted by marlu at 9:18 AM 2 comments:

After four days of clouds with fog in the mornings, we have blue skies.

At least tonight we'll be able to say what the clock says when it gets dark.

(Not crazy about daylight saving time.)
Posted by marlu at 11:36 AM 1 comment:

It seems to me that I have never noticed the changes that happen when we "move the clocks" to save energy. Really?  I suppose there must have been some studies to prove it. The simple solution is just to pick one option and leave it there.

I do understand that it affects some folks. The one that amuses me are when people say their cows are confused. I never could figure that one out. I don't think it was the cows.

Lately I have been taking naps. The reason? We have no schedule. We get up when we wake up, eat when we're hungry and go to bed whenever. Some of my naps are way too long. That means I'll be up late, watching tv or crocheting. In some ways it's nice not to have a time that we have to do something.

The only times we have to meet are our doctor appointments and then we're always early.
Posted by marlu at 5:30 AM 1 comment: 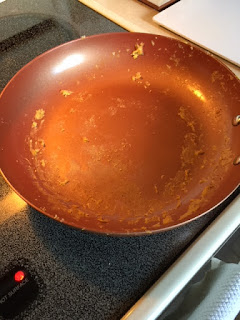 Here is my pan after scrambling two eggs.

I am a sucker for advertising. On this one I waited until a friend/relative reported that nothing sticks. Eggs slide right out!  Wow! I'll bet $19.95 on that fact.

Well two things are apparent:   A. The pan is faulty or B.  I don't know how to cook.

Thinking it's probably B.   I used butter and a low heat.

Ever the optimist, I tried browning hamburger for chili in same pan. This time it was a JOB getting the stuck meat off the pan. I used no scrubber or abrasive cleaner - just a soft dish cloth.

I may donate it to Good Will.