Yep, It's Cold Outside

I think we'll stay in today.

Today while sitting in the van at the grocery store while Lee shopped, a middle-aged man approached the driver's window with a pleasant look on his face. He stopped so I rolled the window down and he said, "You certainly drive a large vehicle for such a small lady."

I laughed and said, "I don't know about the little."  He turned away and told me to have a good day. I wished him a Happy New Year.

Chicken Soup for the Body

Remember the book from a few years ago, Chicken Soup for the Soul?  I made some soup for me to eat. I think it may be true that it helped the cold I felt coming on.

With only a chicken breast and one thigh in the freezer, I used half a bag of Amish noodles. Broth from bouillon cubes is not as good as broth from cooking a whole chicken or from a carton bought at the store. But it's what I had.

I had some cooked carrots from the roast so I sliced them and threw them in at the end of the cooking. It was ok but seemed to lack something. How about a little thickening with corn starch? OK. Still lacking Something. Oh!

My how that improved the thing. So far I have frozen three servings. Lee won't eat it. In fact, when he saw it in the fridge, he said he thought he'd have some of that tuna casserole. I said, 'What tuna?"  He mentioned noodles, so I had to tell him what it really was. I said maybe if I hadn't told him, he probably wouldn't have known the difference. His reply? "Probably."

This morning I had some for breakfast. Weird? Not really. When our boys were in grade school, I heard a teacher that I admired very much say that it was better to let your kids eat anything they wanted for breakfast (left-over pizza?) than to let them go to school with nothing in their tummies! So since that time, I have had some unusual breakfasts, thanking Jan Skeen Bretz for widening my view of what to eat when.
Posted by marlu at 11:36 AM 1 comment:

We talked or texted with both offspring. Had a lovely breakfast and an unusual dinner. We are just
glad we're still here and able to walk around, remaining upright most of the day.  There are times for naps.

Hope you who read this have a quiet and happy day.
Posted by marlu at 11:47 AM 1 comment:

We have an unusual last name. I had never heard of it until I was on a blind date with this good looking sailor. Another couple had asked me to go when another friend backed out of the picnic they had planned. (She had gotten a letter from her boy friend that day and felt guilty about even going on a fun picnic with a group and an unknown guy.  Things were different  sixty-seven years ago.)

Anyway, I agreed to go and while waiting in the car for the sailor to borrow a large tub to put the ice in for the soda pop (beer), I saw the name tag on the key chain of his dad's car. Wow! That's a strange name. Three and a half months later, that name became mine. We waited seven years for our first son and the second son arrived two years later.

And now this week in California that second son and his family took a trip from another state. In a gift shop in San Francisco, they discovered one of the clerks had the same last name. How unlikely is that? It was actually supposed to be her day off but there she was.

They took a selfie and we later figured out that she is actually a cousin-in-law. (Is that an actual deal?)  Anyway, she was married to our sons' cousin.

Too long in the Fridge

Today I'm throwing out some ham.

I thought that 'cured' ham was good forever. It seems I was wrong.
We had some ham for Thanksgiving and since then I have been having a spiral slice once in a while for breakfast or in a ham sandwich.

Google, my source for everything since we no longer have an Encyclopedia, says it's only good for three to five days.

I must have a stomach made of leather.
Posted by marlu at 2:59 PM 1 comment:

The Tale of the Grocery Store

We needed to pick up stuff for chili. It's going to get cold and that sounded good to Lee. Now we have enough food ahead that we can avoid getting out when it's really cold.


I need to carry a calculator to add up what I'm throwing in the cart.
Posted by marlu at 8:36 AM 1 comment: 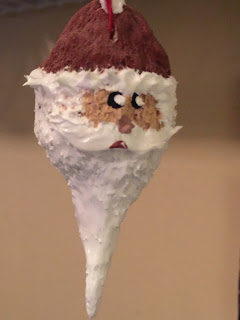 I love this little guy. He hangs from a shelf in front of my computer year round. He's from Minnesota and created by a very talented blogger "up there."  Thanks again for drawing my name!!!

We haven't been doing anything exciting this week. (Do we ever?) I just enjoy my main hobby, crocheting, and trying to keep up with my sister-in-law in New Jersey. She makes beautiful afghans in large sizes. Mine are not so large but she makes more than I do. Not sure how that works but we Skype every day and mostly agree in our conversations.

Today we agreed that if one person says a relationship is consensual but the situation made her feel like a victim - well, that's one of the dumbest things we've ever heard on that subject.

Sorry, Dr. Phil.  Perception is NOT reality in that case.

And for this "victim," just keep your mouth shut if it was consensual.
Posted by marlu at 12:58 PM 3 comments:

Up at six. After shower, coffee and a Danish.

Plan to make a roast today - just like my mom used to make.

Peeled the carrots, potatoes, chopped the onions and cut the fat (most of it) off the roast. Into the oven by 10:30.

Hub says he needs to go to Walgreens. Ok.

Out of the drugstore, I'm directed to stop at McDonald's for a large coke and a cheeseburger. It's 11:30.

Even in murder there are levels of the crime;
Capital Murder, Manslaughter, Criminally Negligent Homicide  and Murder. (from Google.)

So why is there no differentiation in degrees of bad behavior concerning sexual assault?

Putting a hand on a person's back could be called assault if it was done to overpower or hurt an individual. But it could be innocently touching.

If someone who is touched feels it is inappropriate,  speak up at the moment, take care of it right then. Don't wait weeks, months or years later to bring a charge.

The Cost of Smoking

We went to get gas today in the van. It was down to only one quarter tank. Usually we keep the top half full. Lee wondered if it would take $25 worth. It would - with another quarter tank to fill it up.

As I sat there, I saw the sign advertising cigarettes. I've never smoked unless you count the time a friend and I tried one in my bedroom and had to put it out in the window sill and throw it out to the drive-way. I'm sure my mother was not fooled. The smoke does smell, after all. And the evidence was right below my bedroom window. I think that was in the seventh grade.

Anyway, back to the sign. A carton of Newport is listed at $66.49. I had to come home and google how many packs are in a carton. Ten with twenty ciggies in each pack.