The morning after the snow storm, I went out to get the paper. It is always on the porch which is very helpful!  As I looked down at the door mat covered with snow, I also saw that it was sprinkled with yellow.

Seems odd a dog would come up on the porch but there it was.

We had a mini blizzard today. Blizzard means strong winds blowing a lot of snow and limited visibility.  We had all that but at the end it was only about three inches of snow. It could  have been much worse. 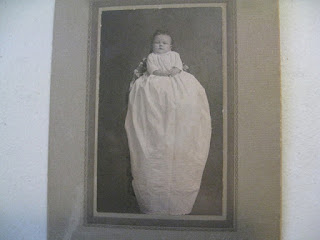 I saw a beautiful baptismal gown on another post and remembered this one of my mom. That skirt is so long you could lose the baby in there.
Posted by marlu at 4:08 PM 2 comments:

Two evenings this week I have watched the space station fly across Kansas. Our son who was here, keeps track of these things.

When it was completely dark it was brighter than the brightest star we could see. However tonight it was dusk and was the only thing visible that looked like a star and moving right along!

The technology that got it up there and keeps it going is amazing.
Posted by marlu at 4:07 PM 1 comment:

We had a wonderful Day with the folks from the south, Texas, that is. We all wished the people from the north, Oregon, could have been here too!

Wonderful food brought with them included our daughter-in-law's homemade noodles, cheese olives and loads of other stuff! We had a great time and a delicious meal. The ladies who came to visit did all the work. I, of course was so tired after watching them, had to take a nap.

We are thankful for our family but sorry they live so far away in two different directions!
Posted by marlu at 12:06 PM 1 comment:

What It Was, Was Football

We have a favorite team - the Kansas City Chiefs. Last night was the best football game I have ever seen. They were down 13 - 0 and came back.  They were down more points later and tied it up. Each kicker missed a point after. There were way too many flags thrown.

But, talk about exciting. The first 73 yard pass that I witnessed on tv (or anywhere) was thrown by Patrick Mahomes. The other quarterback was no slouch either - Goff and his team were very strong.

Sadly Mahomes had at least two interceptions and a sack but he really showed guts or maturity or something and kept on keeping on. Sadly the Rams won but it was the highest scoring game in NFL history. . . . 54-51.

As to the title of this blog - if you have never heard Andy Griffiths recording with that name, it was on a record album of his stories. We listened to it in Russell, Kansas, when Lee was on a mid watch at a small airport! Let's see, we spent two years there and left in 1954.

It's been a while.

P.S. I guess I was so excited that I did not fall asleep after the  late game. I was awake all night. It's time for a nap.
Posted by marlu at 10:19 AM 3 comments: 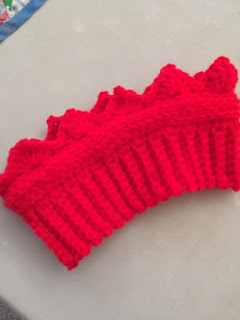 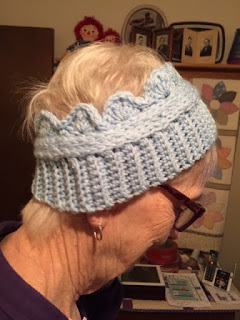 I also made another ear warmer. The blue one was the first attempt. The red one came out better. I saw this on the internet and when I went to the site for the free pattern, I got a message that it was not a safe site so I backed out of there.
I took a photo with my phone and copied it. I am not selling them and the design belongs to someone else so I think I'm legal. 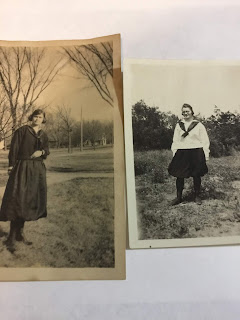 At another location on the World Wide Web I saw a picture of a young woman wearing this type blouse. So I looked in my Picasa file and here was my example.
The woman on the left is my mom in her teen age years and the woman on the right was my aunt. She died of pneumonia at age 22 in 1922.

There were fads and fashions oddities in all periods of history!
Posted by marlu at 8:39 AM 1 comment:

After several cloudy and cold days with a tiny bit of snow, we were back in the sixty's today.

Typical Kansas ups and downs on the thermometer.
Posted by marlu at 8:21 PM No comments:

We have a big tv that we've had for a long time. There are so many things on it that we do not use.

Someone pressed a button and got Closed Captioning turned on while the sound was still available. I had sometimes wished for that option. Then I would know what someone is saying who speaks very softly without my having to turning up the volume.

Well, it was on and we had no idea how to turn it off. We couldn't find the book for the tv so I called our local provider. They were glad to help after I gave them a lot of info. When they wanted the numbers on the back of the box, I gave up, thanked the helper and hung up. Lee found the book for the tv and on page 36 the procedure was explained.  Woo Hoo!

But wait. It showed the control that came with the television - not the control for Contour!

Then the search was on for the control that came with the tv. Lee never throws anything away but this thing is hidden somewhere, probably for good.

I hesitantly started selecting buttons and found one that said "set up." Nope. Finally one showed a menu. That button was not labeled "menu" however.

I found the option and turned off CC!

We stayed inside today. I don't know if the temperature got above 25 degrees.

We had some more snow but it still didn't not cover the concrete - just the grass.

I took a nap - as Judy, my sister-in-law, says; what an exciting life we lead!

I am within four rows of finishing my current afghan. I think I'll call it "Am I Blue?" 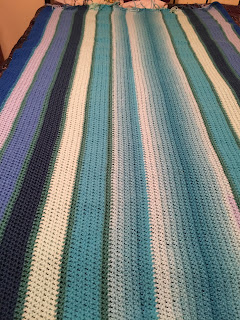 The middle section is one skein of ombre yarn called Surf. The package says it makes stripes.
I'm not sure how that works yet
Posted by marlu at 6:27 PM 4 comments:

I put the flag out after sunrise.

At almost sundown I mentioned bringing it inside. L. said he'd do it.

About 10:30 I thought I should check the closet where we keep it. No flag.

I went out and it was all wet. Rain/snow flurries.

So now it's drying. I'm sorry we left it out after dark. The yard light was on so it was slightly illuminated. Glad no one took it away! 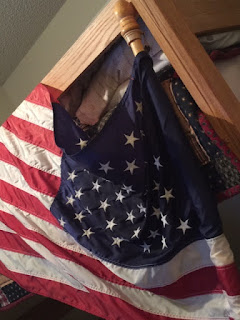 It Takes All KInds

I really believe in the goodness and kindness of most people. Sometimes the news makes it seem as though there is a lot of evil in the world because in  past times, bad news sold papers - and radio and tv news seemed to give big headlines to awful things.

On a smaller scale and in a land far, far away there is a story to tell. A lovely woman that I know offered to donate an item to a cause for people suffering from disease.  There was a choice of two. The woman (I want to say "creature") who asked for the donation exclaimed, "I Love This! I'll keep if for myself and donate the other one."

The maker of the other beautiful item quickly said no, that one is for someone else. So the greedy one only got away with one donation.

I wonder how people like that can sleep at night - or live with themselves.

The people who donate are blessed and renew my faith in the human race.
Posted by marlu at 8:35 PM 3 comments: 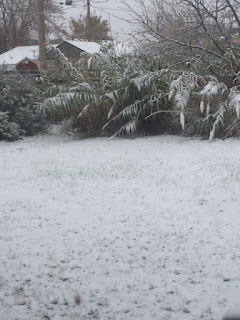 I woke up at 7:00 and when I opened the door to get the paper, I saw snow. The weather people were calling it snow showers. Later we had enough to cover the plants and grass. The concrete never was covered. I wish all snow would be so considerate. Driving would be easier all winter.

This year the pampas grass didn't get trimmed so we had this bent over sight today.
Posted by marlu at 6:01 PM 2 comments:

Thanks to a friend who shops online, we have new bags for the vacuum cleaner. They were hard to find locally and when I tried to find them online, they must have been lined with gold dust. Barb found some at a good price!

So I used the vacuum today. Why does that tank seem so heavy?

If I could have one wish, I think it would be a cleaning lady.
Posted by marlu at 5:43 PM 1 comment:

I was told I had a surprise coming from the east by someone who was supposed to keep it a secret. She didn't tell me what it was but she did say when it would be here.

I have a triple frame with two grand nephews and a grand niece on display. They are so handsome and from what I hear, they are really good kids.

Thank you so much, Missy and family! The pictures are on the mantle!
Posted by marlu at 5:40 PM 1 comment:

I had a good night's sleep after going to bed early and waking up about 6:30 CST. I honestly do not see any difference in my reactions to the change in the clocks. We do not keep a strict schedule here.
I guess I don't see any change because we eat when we are hungry and not by the clock.

It always made me laugh when the farmers said the time change confused the cows. Really? It seems to me a person could just milk the cows at the same time of day as the day before. . . just ignore what the clock says. But maybe that's too complicated.

The main thing is that our granddaughter in Oregon country has her fifteenth birthday today. We miss them so much. It's hard to believe they are growing up so fast and so far away. Her sister was  thirteen on July 4th. Two teen agers, twenty months apart! Happy birthday to Miss Emma!

Lots of people our age travel; flying or cruising. We are just limited in that now. We used to drive there (!) and have flown there a few times but now we're home bodies. I'm not "happy" about it but one has to adjust to circumstances.
Posted by marlu at 5:09 PM 1 comment: 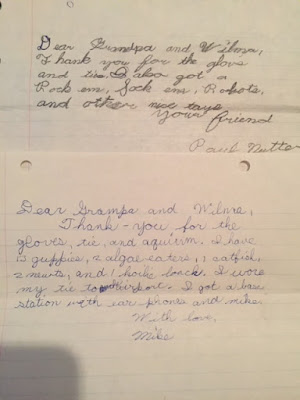 This started out to be about cursive writing. I found these two letters written to my dad from our sons at a Christmas probably about 1969. I really wasn't sure that they were taught cursive in grade school. So here were two samples. 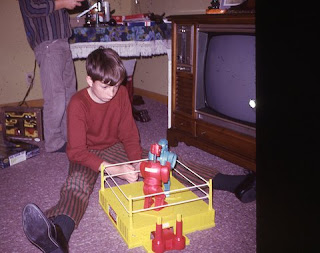 Then when PN mentioned the robots, I knew I had a photo of them but it is MN playing with them!
Posted by marlu at 4:58 PM 4 comments: 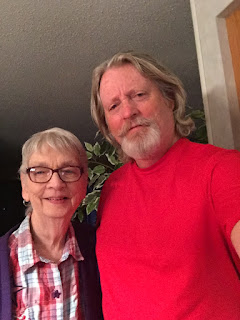 This is a picture of our older son and his mother. He came and visited. Finally got a picture. There might be a family resemblance if I let my moustache grow.
Posted by marlu at 10:48 AM 2 comments: