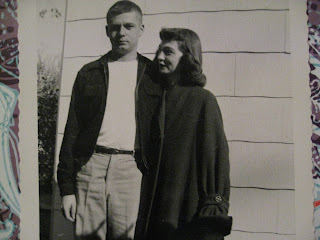 Remember the song, "Will you still love me when I'm sixty-four?" On the day this picture was taken I would never have imagined that we would still love each other sixty four YEARS later - way past being sixty-four years old.
Still together and wish I still had that coat. Deep wine with big buttons and very long and full! Just glad I still have the handsome man.
Posted by marlu at 8:51 AM 2 comments: 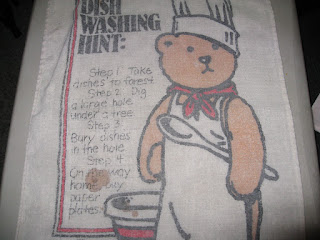 This old towel is so thin, I may have to retire it to the rag bag. It was received many years ago from a friend who was participating in one of those chain letters deals where you sent something along.
I have always thought it was cute and I've used it a lot.  I always think of Carlene when I see it. She was a good buddy from Chase, KS, whom I met at juco (Hutchinson Community College now - the term junior college was declared so demeaning several years ago.) I thought it was a perfect term for the first two years of college. You could attend in your home town or at a location near your smaller, rural home without being put into a huge population on a big campus. For some that is no  problem but for others it can be overwhelming.
We still have the choice but now must see the title "junior college" put away in the rag bag where this towel will shortly be located.
Posted by marlu at 6:48 AM 1 comment:

Today's SNAFU comes from a baking event. I decided to use some old bananas in a recipe for banana bread that I have probably made twenty-five times since 1947 when I copied it from Mrs. Baxter's "receipt."

Two cups of flour. I dumped in three. I wish I could blame it on the new glasses but I cannot. It
is written very clearly and rereading it, I can see it very clearly. I scraped out as much of the third cup of flour as I could. Luckily I hadn't stirred it into the batter yet. Picked up another very ripe (think black) banana and mashed it and added it into the bowl.

After almost an hour (as opposed to the fifty minutes called for) the tooth pick came out clean.
First slice, warm with butter, and a cup of coffee was very tasty.

I read something the other day that said when you get older, you don't quit doing stupid things; you just do them more slowly. 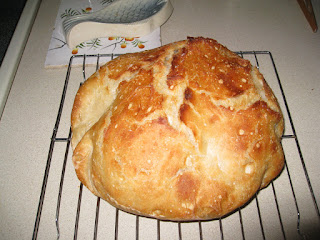 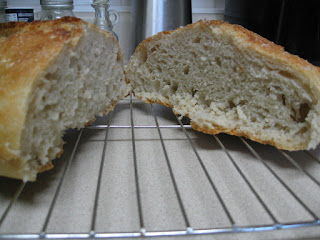 Well, I tried it again yesterday. My previous tries were not successful. One had terrible texture (I forgot the salt) and for the second attempt, I added too much yeast and changed it into French bread. This one turned out ok.  Tastes great. Perhaps an electric knife would help getting through the crust, but I managed with a serrated blade.
Even the Boss said it was good. (I had to ask though.) 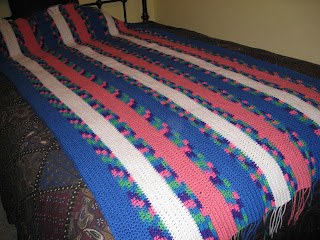 I've been making afghans for all the grands (four) and now I can't stop. Made one for a friend and this one may be for another friend. Crocheting makes me only a part time computer surfer.
Posted by marlu at 8:12 AM 1 comment:

I love apple fritters. However, I am trying to abstain and recover my youthful figure (translation: trying to make the old lady belly look smaller.) So when the other occupant of our home brought home a box of the sugary treat, I did not eat one.

This morning I found the empty box in the kitchen with a few crumbs left in it. As I got ready to wash it for the recycle cart, I cheated and picked up one medium sized crumb. As soon as I put it in my mouth, I realized the preparer of dog suppers had trimmed some meat from the roast he cooks and puts in the dog dishes. The piece was lying there lean side up, fat side down.

I couldn't get rid of that morsel fast enough. When I told him later, the actually laughed. That doesn't happen when I tell him jokes.
Posted by marlu at 6:47 PM 2 comments: 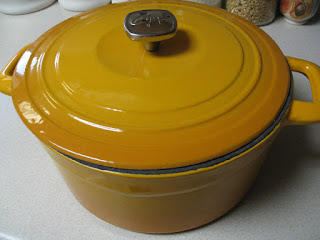 This is my new pot! (Thanks Metaml.) It is going to be used, among other things, for Crusty bread.
I love home made bread. I used to make French bread a long time ago. Recently I saw a video on the internet (where else?) about No Knead bread. The French bread I make is No Knead either  - just some stirring at intervals.) So this Crusty bread, baked at 450 degrees in a pre heated cast iron pot really appealed to me. The problem? All my pots were Corningware or had plastic handles. Neither would be too good at 450 degrees although Corningware is built to withstand high temps. Plopping some cool dough after preheating the container to 450 degrees might not be the best plan in glass.
So I received this sixteen pound package from UPS and planned to use it yesterday morning to try out the Crusty bread.
First move: measure flour. Second: add 1/4 tsp. yeast. Since I am used to using the whole packet for the French bread, I automatically dumped the whole packet in (1 1/2. tsp.) Panic. I can't take the yeast out of the flour. What to do?  Add another cup of flour and make French bread again.
Maybe Crusty will get made in a few days. Two people can only eat so much bread.