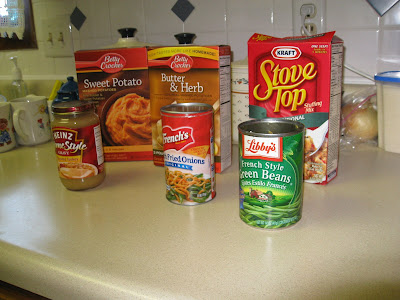 Green beans in oven thirty minutes; all other boxes prepared during that time; sliced turkey and rolls put in oven to reheat;
gravy heated in microwave. 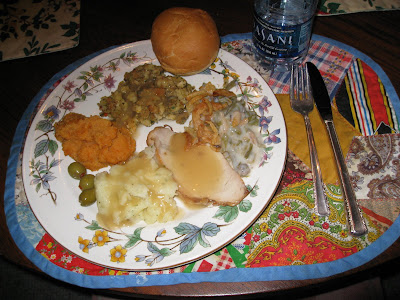 Here the cranberries from the deli (not from a can) are missing because L. had not passed them to me yet. He doesn't care for them so he forgot to pass them over.

I am very thankful for being able to fix our meal in less than 45 minutes and thankful for all our other blessings.
Hope you had a wonderful meal too. (The pie will be later with coffee.) 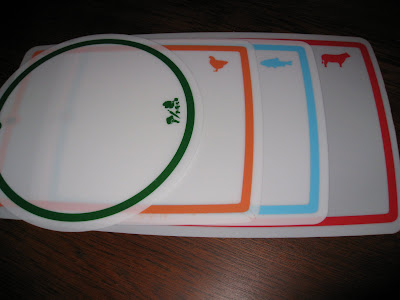 We needed a new cutting board. The old plastic one had been used for applying a stiffening solution to a crochet creation.
That left a residue that was harmless but ugly.
So the shopper in the family found these - already marked for which one to use for various foods. No cross contamination here! They are also very colorful. 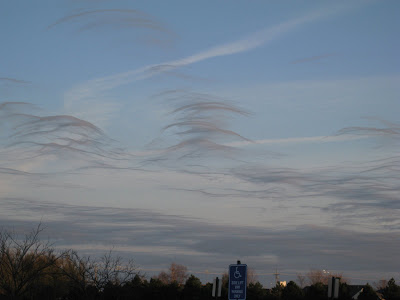 in the southeast sky. L. said they looked like the space craft in War of the Worlds. 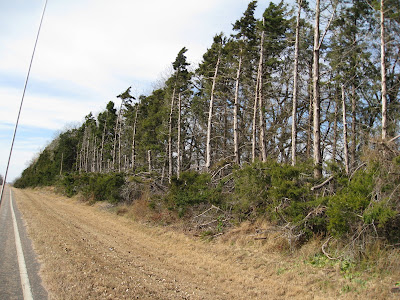 This row of pine trees is what is left of a shelter belt. Are these trees dying of age or the beetle that is killing pines in Colorado? Whatever the cause, it's sad. I remember hearing that pollution was doing the same to the forests in Germany.
The solution? Plant more trees.

Or should it be sweeping the leaves? This was a warm Sunday.
And today we have a cold Monday with big snow flakes.Thank goodness we don't have to shovel the yard. 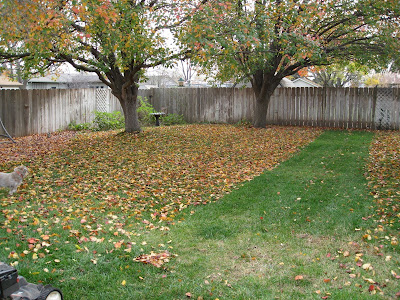 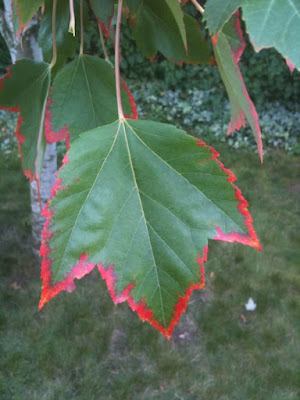 With all the pictures of leaves that I've taken this year, I've never seen anything like this one, taken by our son. It's as if someone took the time to carefully paint the edges for a decorative effect. However it happened - too much moisture, too little moisture, Jack Frost - it is beautiful. Take time to enjoy the world around you!

Doesn't this remind you of a doll house or maybe something from a movie set? 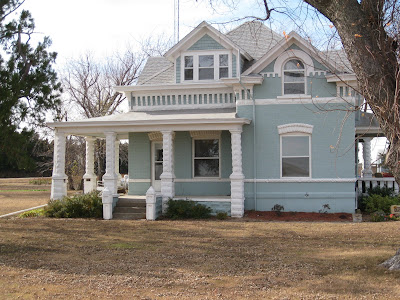 The way it is painted is such a nice way to bring out the features of this old farm house. I wonder if it's as old as I think it is - about one hundred years?

I think this message is one we can relate to - especially those of you who have regularly "mowed" leaves each day to keep up. Now our leaves are gone but amazingly, with the south wind, we are receiving huge 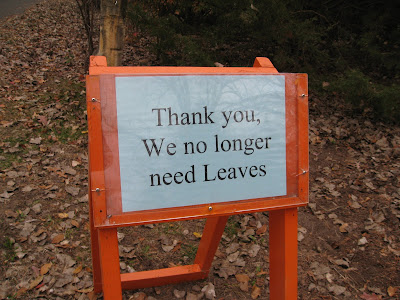 sycamore leaves from several blocks away. I keep telling the mower-in-chief that they will blow on eventually; either to the north or to the south. I do love autumn. 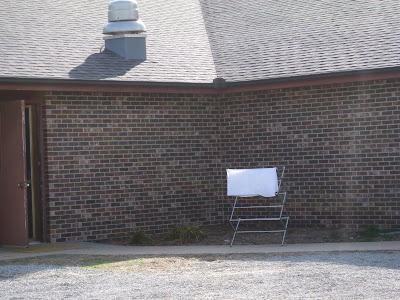 This reminds me of how we dried clothes on rainy days. Only our rack was in the basement. This was near a church that was servng turkey dinners. Later more tea towels appeared as the dishes were washed. Remembering a simpler time, without electric driers......

Walk in the woods - KS style 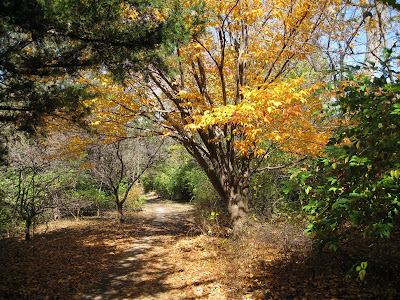 We don't have many "woods" in the flatlands of Kansas but one of the nicest small areas for trees is found in Hutchinson at Dillon Nature Center. Fishermen, bird watchers, kids on school trips and dog walkers use this lovely area a lot. When I was in high school, it was called Dillon's Lake and was used for the employees of the grocery company. Later it was given to the city and has been lovingly developed by people who plant flowers. Most of it is left alone. . . with fallen trees and untrimmed foliage. There are several great sculptures, all made by local artists. We walk Wally there, always taking our little white plastic bags to leave the paths as we found them. Wish everybody did.

The new will be old

I am so impressed. A local market is removing the ugly
aluminum front above their doors. They are going to replace
it with the original decor. Would that all the Main Street 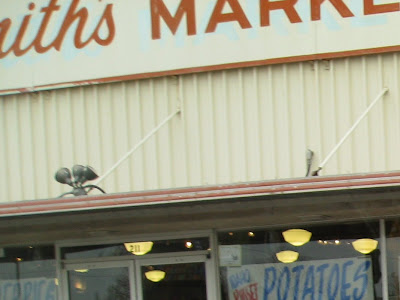 businesses could do this. We would have a unique look to
go along with the improvements the city has made with
sidewalks, landscaping, benches and tables with chairs. 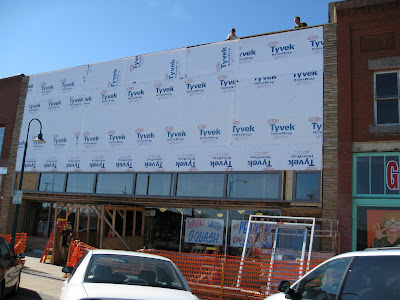 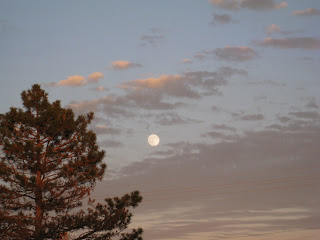 The full moon has always fascinated me. Trying to get a good picture without a long lens is a real
challenge. This has been cropped twice to make the moon appear larger.
To see a real picture of the same moon (!) see www.thelope.com. 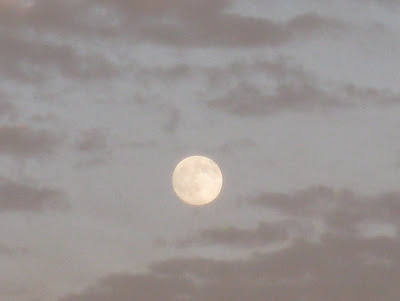 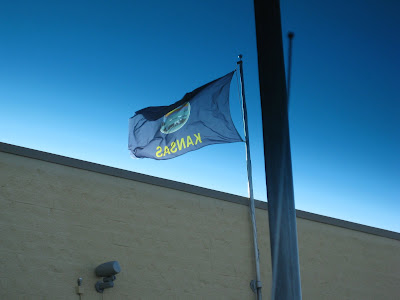 This picture of the flag of the state of Kansas shows what most of the rest of the country think of our state...backward. Most of us who live here love the flatness, mostly quiet times and easy, friendly ways. There are things some of us don't like; the state ruling about trying to put creation "science" in the class room and the so-called minister from Topeka who embarrasses us every time he's in the news.

I read a critique of the state flags that said ours was too busy. Here is a description from the internet:

"On a navy blue field is a sunflower, the state flower. Also, the state seal and the words "Kansas". In the picture of the state seal are thirty-four stars representing the order of statehood. Above the stars is the motto "To the Stars Through Difficulties". On the seal a sunrise overshadows a farmer plowing a field near his log cabin, a steamboat sailing the Kansas River, a wagontrain heading west and Native Americans hunting bison."
That is a lot to absorb but whoever designed it wanted to include all that stuff. It doesn't even mention the fighting before and during the Civil War....we weren't called Bleeding Kansas for nothing.