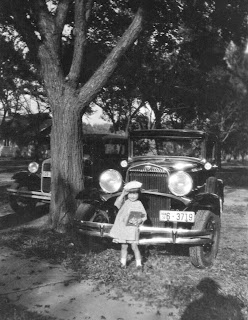 Other places on the internet it's Throw Back Thursday so I'll use this photo here too. The year is 1934 and I was three years old. This was at my grandma's house in Halstead, KS.
Posted by marlu at 2:38 PM 3 comments:

This date has many interesting events occurring on it....Hitler's wedding, Prince William and Kate's wedding, Willie Nelson's birthday and..........a blind date with my future husband. He's the one on the left in a photo taken in 1952. Yes, sixty-three years ago today and he hasn't been out of my thoughts and life since! We must have known it was the right thing from the beginning because three and a half months later, we were married.
Posted by marlu at 6:30 AM No comments: 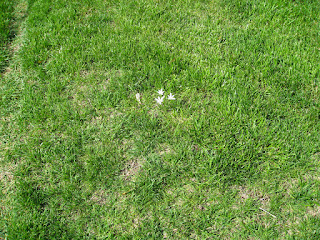 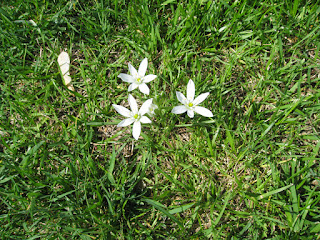 We have a fairly large back yard. In one corner there is an area of some type of lily and this year some white flowers like the ones in these photos appeared. There were quite a few of them. Two days ago as L. was mowing, he saw these three little ones on the other side of the yard - well away from the group. He is mowing around them to see if they will spread.
Posted by marlu at 9:52 AM No comments: 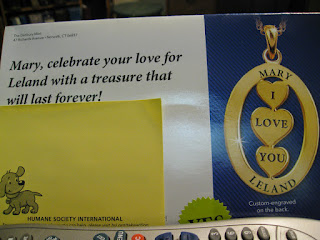 This brightly colored ad came in the mail Saturday. At first glance, I thought it was directed to my husband - to buy me this necklace that has engraved on the reverse ("the side against your heart") that he loves me. However, I read the script and it is directed to ME - to buy this to show that I love him. The diamonds are real and all for only $99 plus free diamond earrings. How could a wife go wrong? I think I'll pass. He knows it already. The yellow sticky note from the Humane Society is to hide our address. As if anything is private anymore!
Posted by marlu at 7:35 AM No comments: 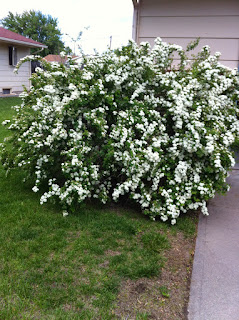 The bush L. planted a few years ago is looking very nice! Wish the flowers lasted longer through the spring and summer.
Posted by marlu at 5:11 PM No comments: 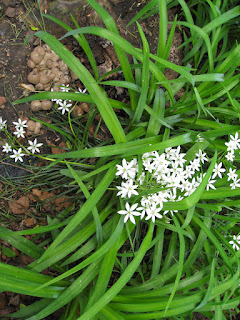 And some toad stools.
Posted by marlu at 1:25 PM No comments:

Today was grocery shopping day. The first trip was made and we forgot a couple of things. So another trip was made. While I waited in the car, L. went in to pick up the items we needed (?) One reason we went today was because of the new TOR CON 6 warning. This is so much more convenient than the old "Tornado watch" from the weather bureau. It's hard to keep up with these new terms. I had to Google TOR CON.
Posted by marlu at 1:12 PM 1 comment: 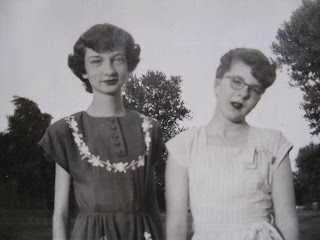 On the right is my BFF. She moved to town when we were in the fifth grade. The teacher asked if anyone lived near her and no one raised a hand. She told me later that she knew who lived close but she didn't hold it against me that I didn't respond. She was wearing a dress in two shades of blue. Near the shoulder was a bird in flight with an envelope in its mouth and the words, "Air Mail." Someone asked her if that was her name. Luckily that was not I because she thought she had landed in a town full of dummies. We are miles away from each other but still talk on the phone. Efforts to get her on Skype have not been successful. Love ya, Jo.
Posted by marlu at 3:09 PM 1 comment: 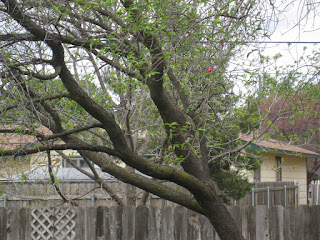 Not so long ago this tree was covered with white and red blossoms. We don't know what kind of tree it is but it is beautiful for about two weeks in the spring. This morning I noticed that there was one flower left, hanging on after all the wind we had on Monday... a promise that there will be more next spring.
Posted by marlu at 4:31 AM No comments: 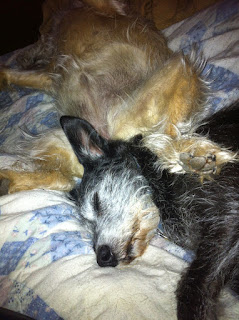 Our two dogs sleep in such weird configurations at times. Jill is tan and Jack is black.
Posted by marlu at 12:51 PM No comments: 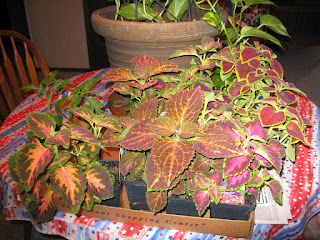 It has become chilly (50 degrees) so we are holding off on planting our coleus. So our table is loaded with plants. Also, we are ready for the 4th of July with the table cloth.
Posted by marlu at 4:41 PM 2 comments: 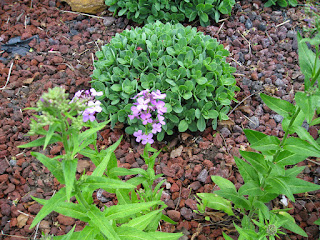 After a very dry winter, our plants aren't thriving. Other years the garden phlox has been elbow high but not this year. And now today is the day to plant coleus in some pots on the porch. And later - The temperature has been falling since mid morning with northerly winds. We have put off the planting until tomorrow. With a forecast of middle 30's tonight, we don't want any frosty coleus wilting on the porch.
Posted by marlu at 10:06 AM No comments: 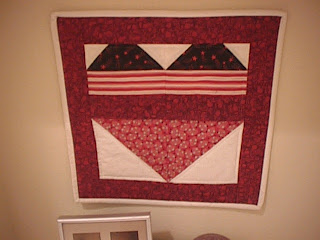 When I used to quilt, I made a lot of small wall hangings and gave them away. This one always makes me smile - sort of a crazy heart in black and red.
Posted by marlu at 8:37 AM No comments: 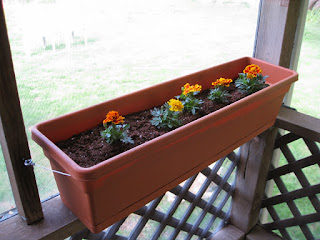 Our pathetic attempt to put some flowers on the screened in porch to keep the mosquitoes away. Besides being pretty, if they repel mosquitos, it would be perfect.
Posted by marlu at 5:28 PM No comments:

I guess I'm a sucker for advertising. I saw the ad for a salted caramel truffle at DQ on the telly. Since the other half wanted a milkshake, we picked Dairy Queen for the purchase. I ordered the small size while he got a large. Prices....I knew the milkshake was at least $3 and thought since I was getting a SMALL item it would be less. Final total: $7.13. Does anybody else remember when milkshakes were a quarter and if you ordered in, they brought the cold, metal container it was whipped in and you could add that to your glass. After I checked on the internet for calories, I am so glad I did order the small. The fat content and calories were worth it. A very tasty concoction if you like Heath bars.
Posted by marlu at 1:28 PM 1 comment: 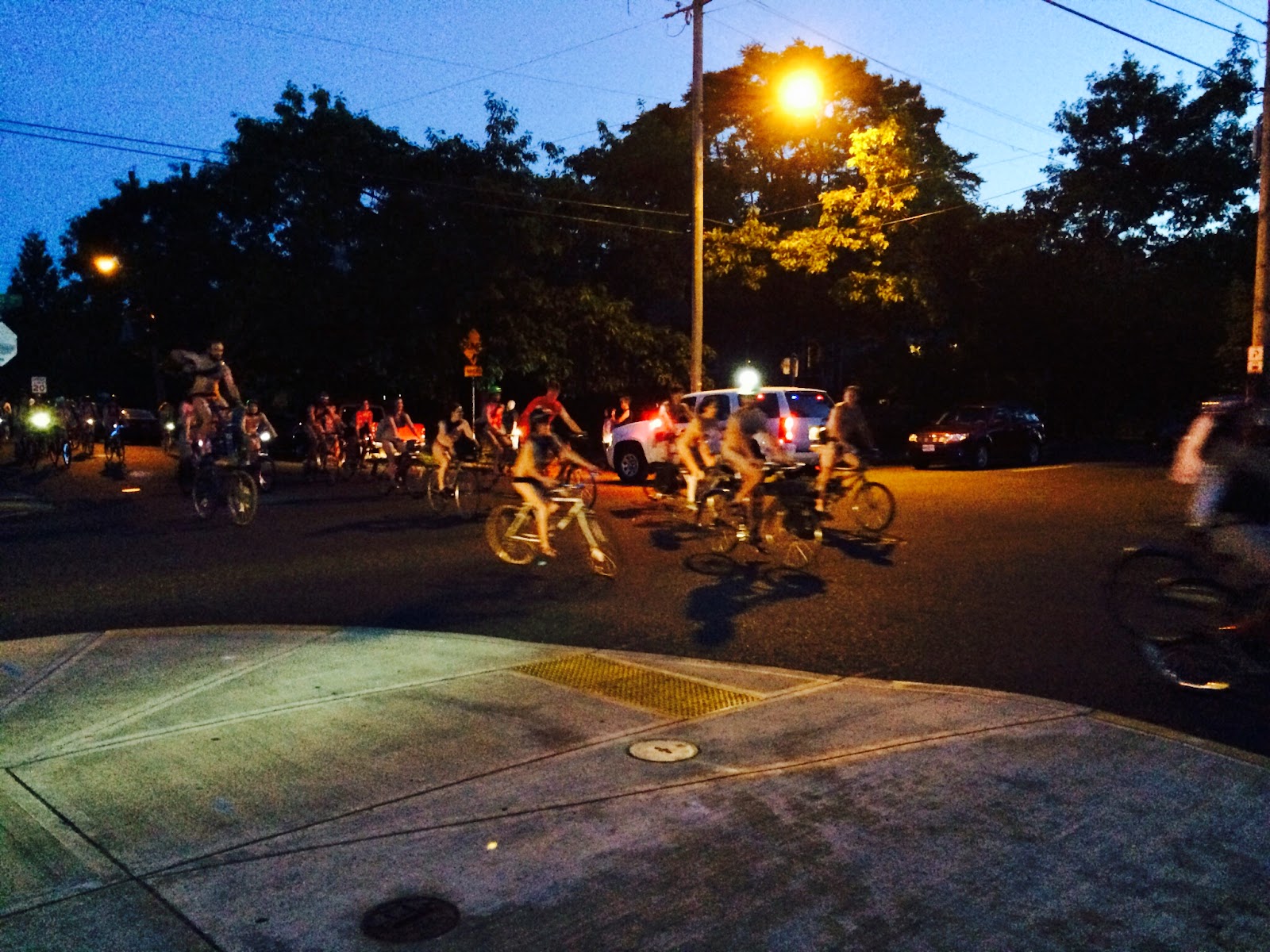 I knew Portland was a bicycle friendly city but this was a new wrinkle, depending on the age of the cyclist.
Naked bike riding at night.
And we will end all these bike photos with an item from "Keep Portland Weird." It may happen elsewhere, but they don't advertise it.
Posted by marlu at 10:31 AM 1 comment: 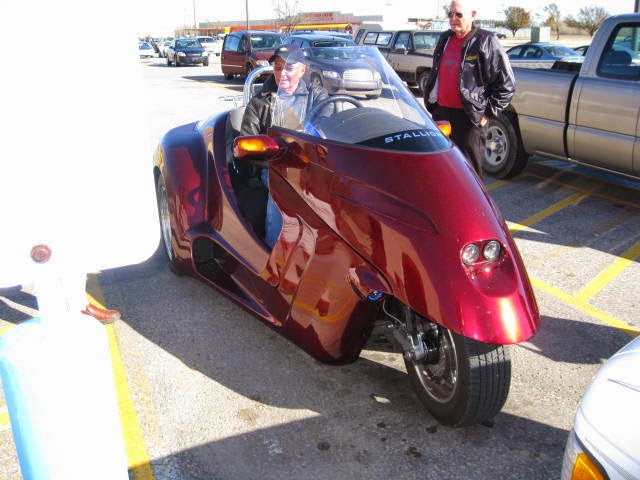 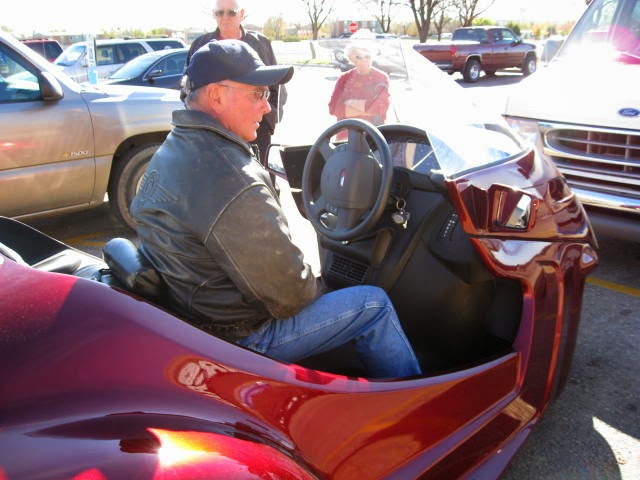 A cross between a convertible automobile and motorcycle and a tricycle. I would bet there is a large price tag on this item.
Posted by marlu at 8:07 AM No comments: 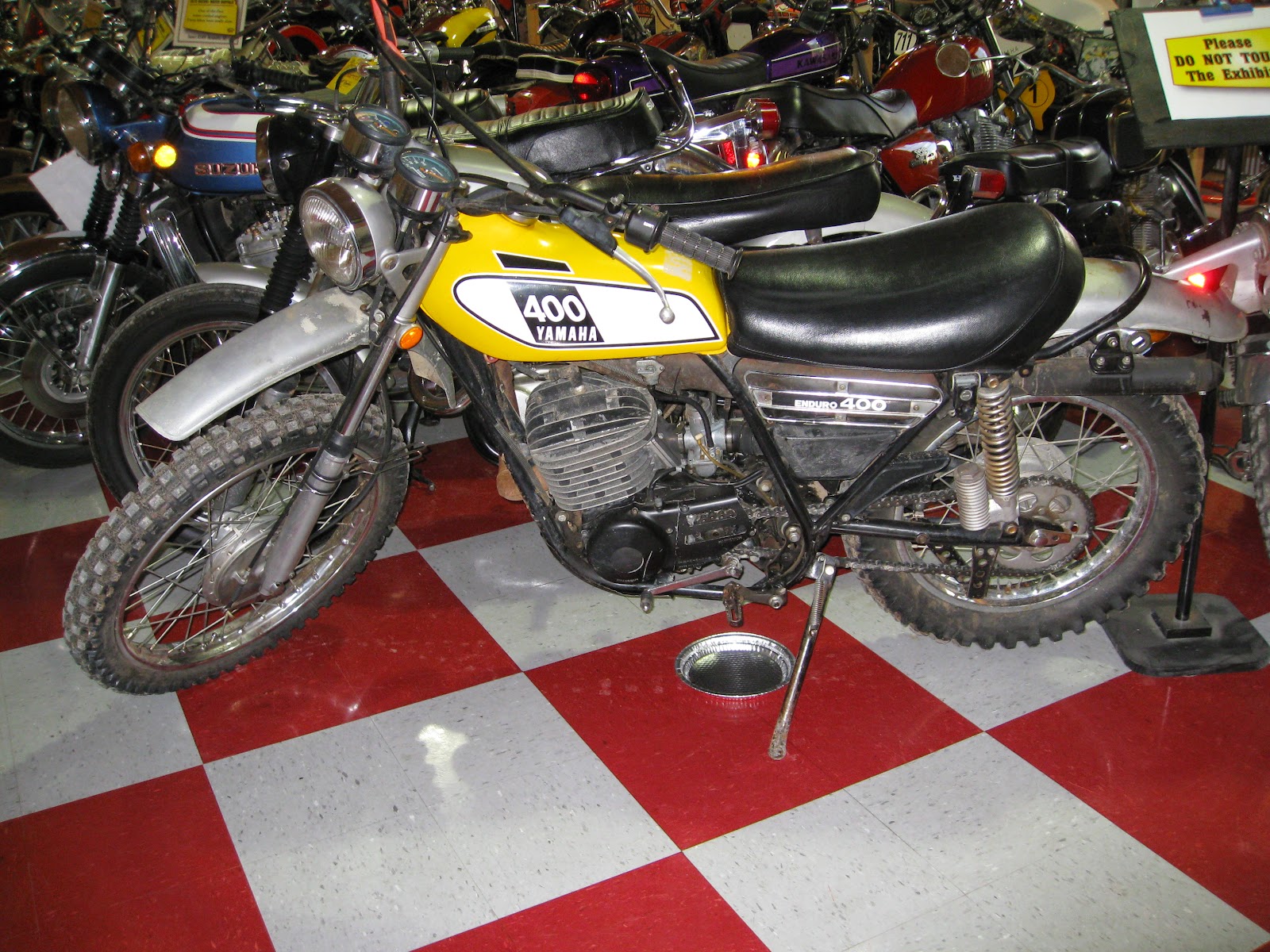 If you are ever near Marquette, KS, be sure and stop at the Motorcycle Museum. It's an amazing place.
Posted by marlu at 7:10 AM No comments:

And A Whole Row 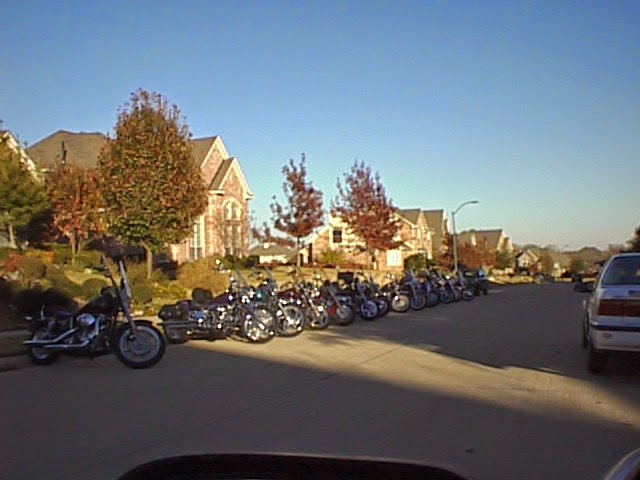 Can you tell by now that bikes have been an important part of our family life?
Posted by marlu at 8:05 AM No comments: 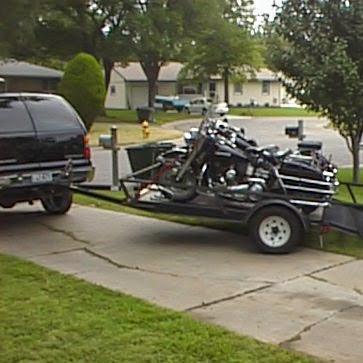 Only a few more bike photos!
Posted by marlu at 6:27 AM No comments:

An Anniversary of a New Arrival 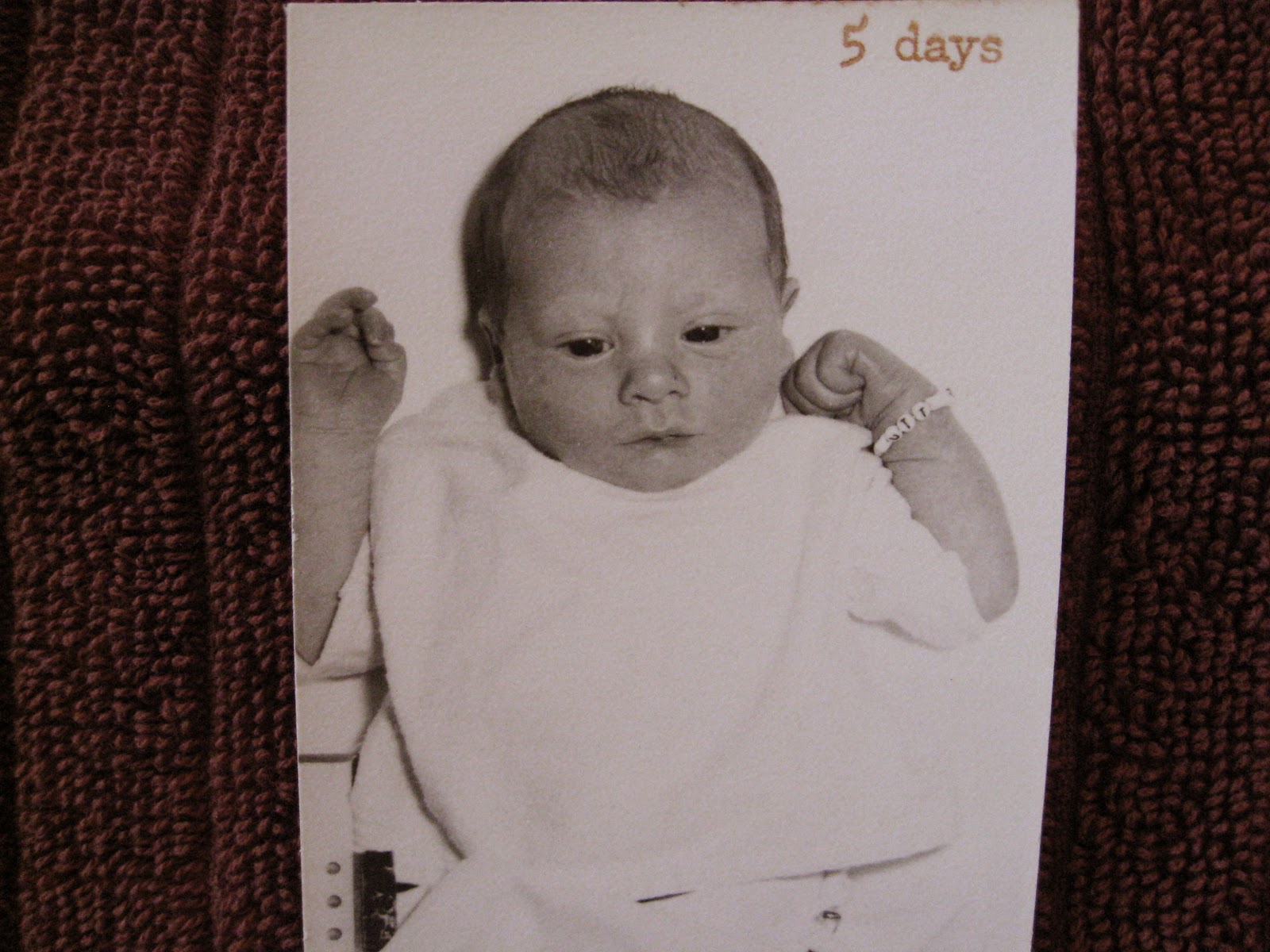 Several years ago, this little kid arrived. We had been married almost seven years and I had given up on becoming a mother. One of the nuns present at the birth announced that I was one of their older first time mothers.....I was 28.

Happy Birthday, MN. You were worth waiting for. After figuring it out,  we greeted PN twenty-eight months later. They made our lives complete.
Posted by marlu at 8:28 AM 4 comments:

Vans and Cars and Bikes - oh my 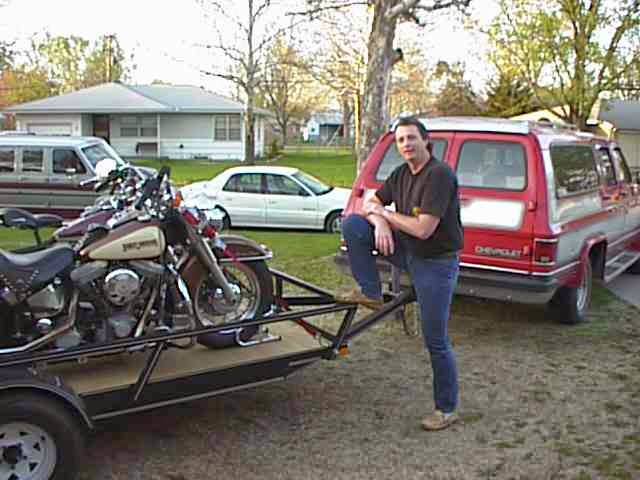 The only things in this picture that are still around are the Harley and the man. Trailer, stolen; Ford van sold; Pontiac gone; and van attached to trailer gone. This photo brings back some memories, for sure!
Posted by marlu at 10:31 AM 2 comments: 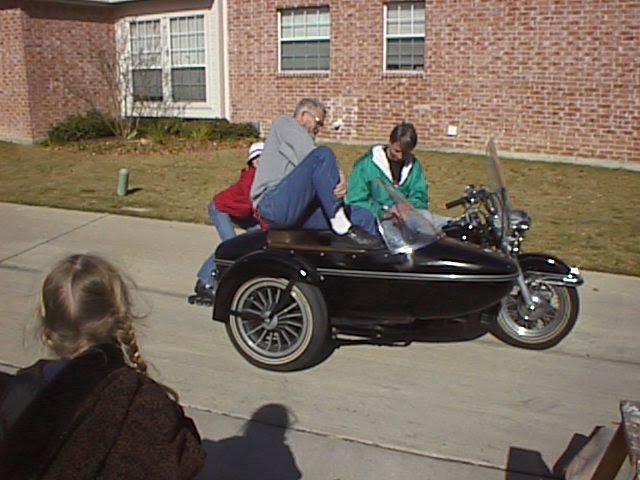 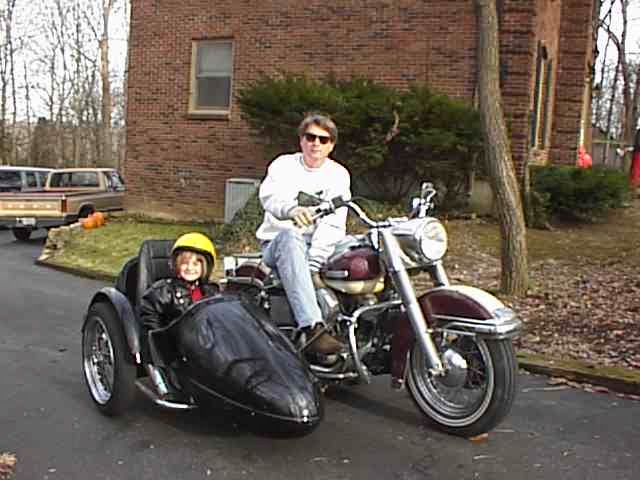 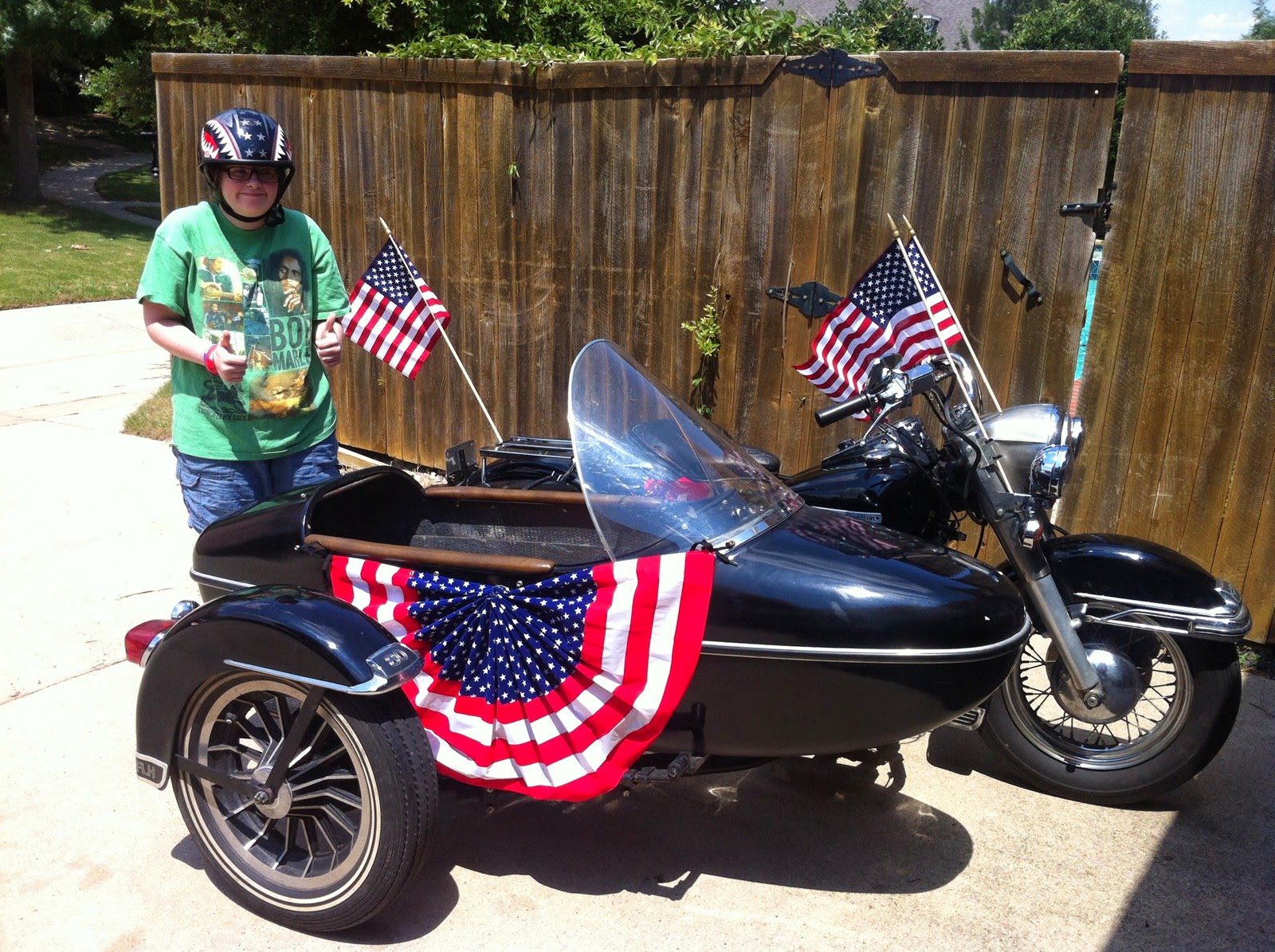 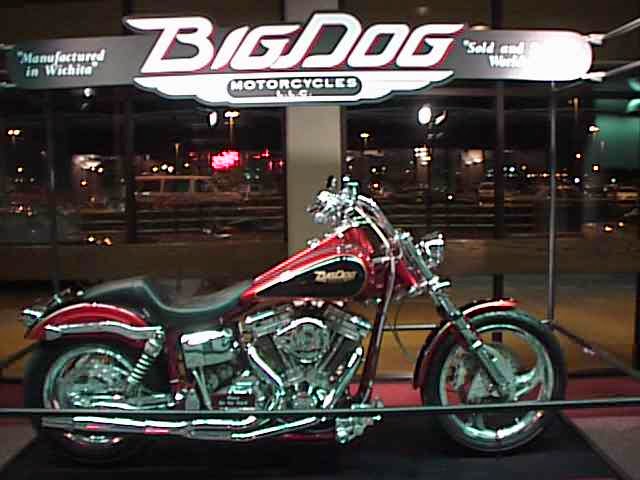 We didn't have one of these. They used to be built in Wichita but I believe
they are out of business.
Posted by marlu at 7:48 AM No comments: 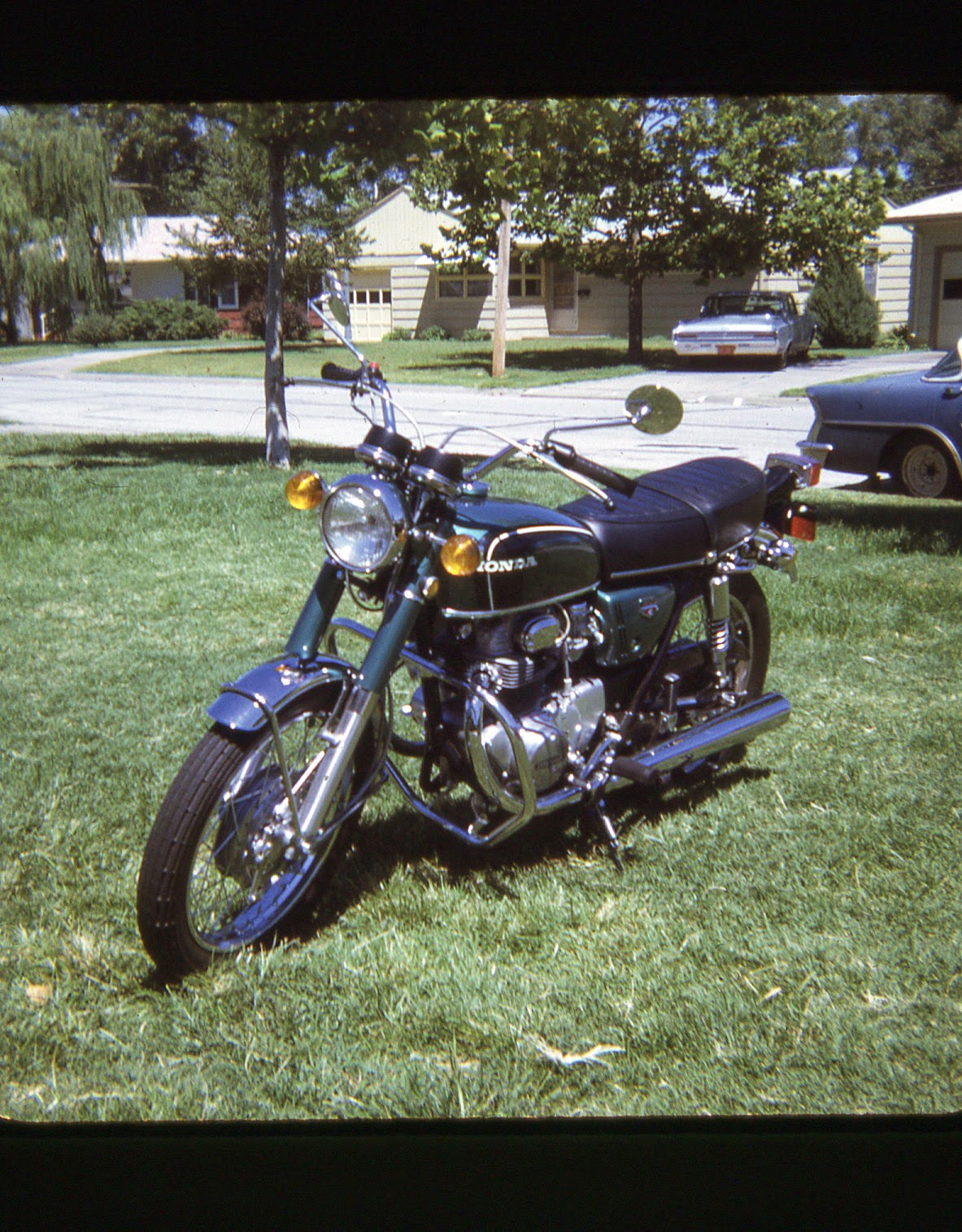 Unknown year.
Notice the '56 Buick in the background.
Posted by marlu at 8:19 AM No comments: 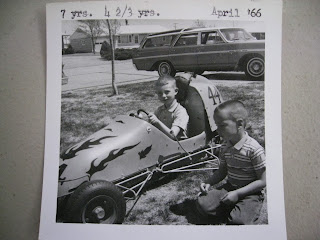 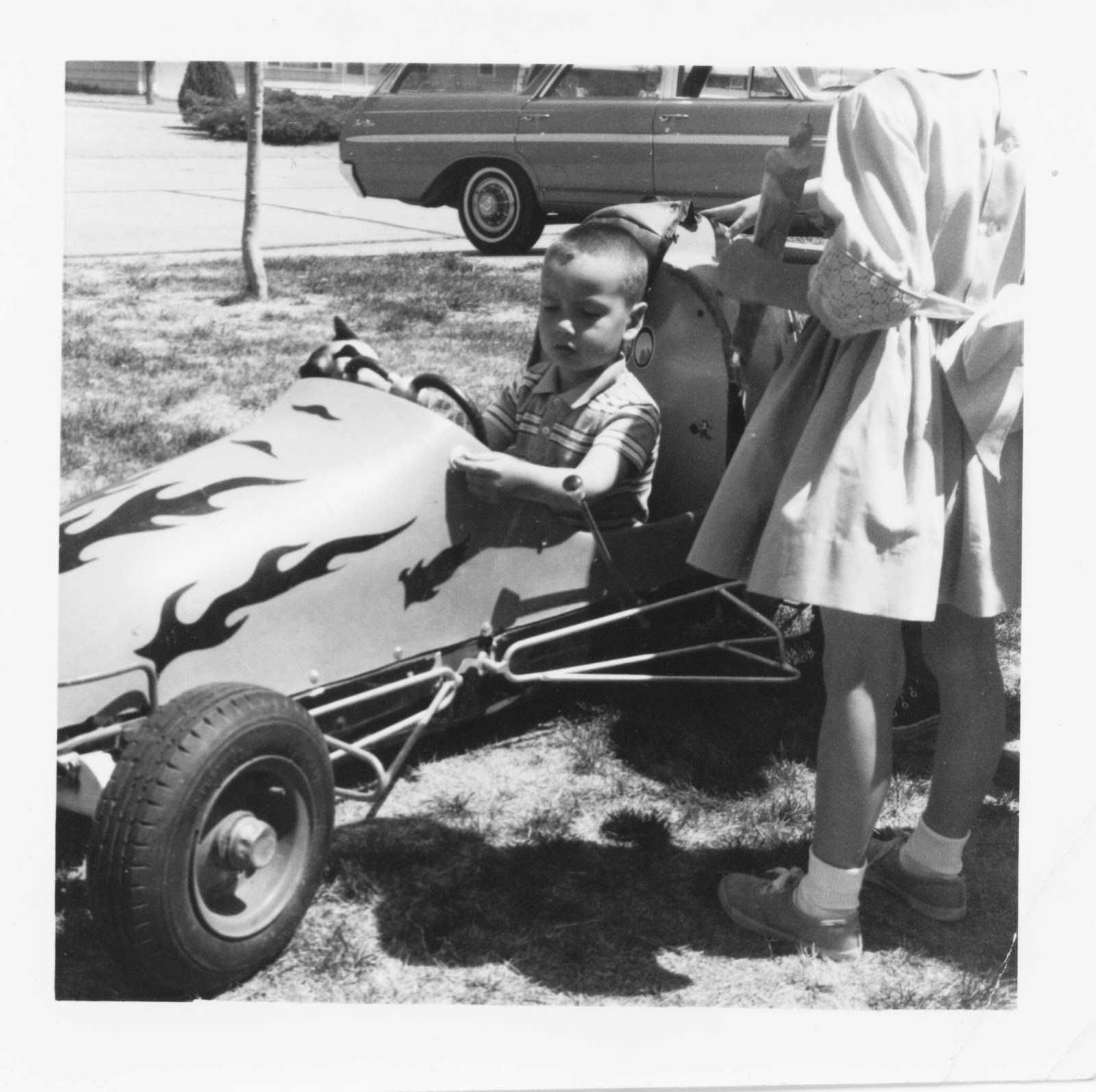 This one has four wheels so it is not a bike but it was so cute.
Posted by marlu at 2:30 PM No comments:

Only the glass was broken 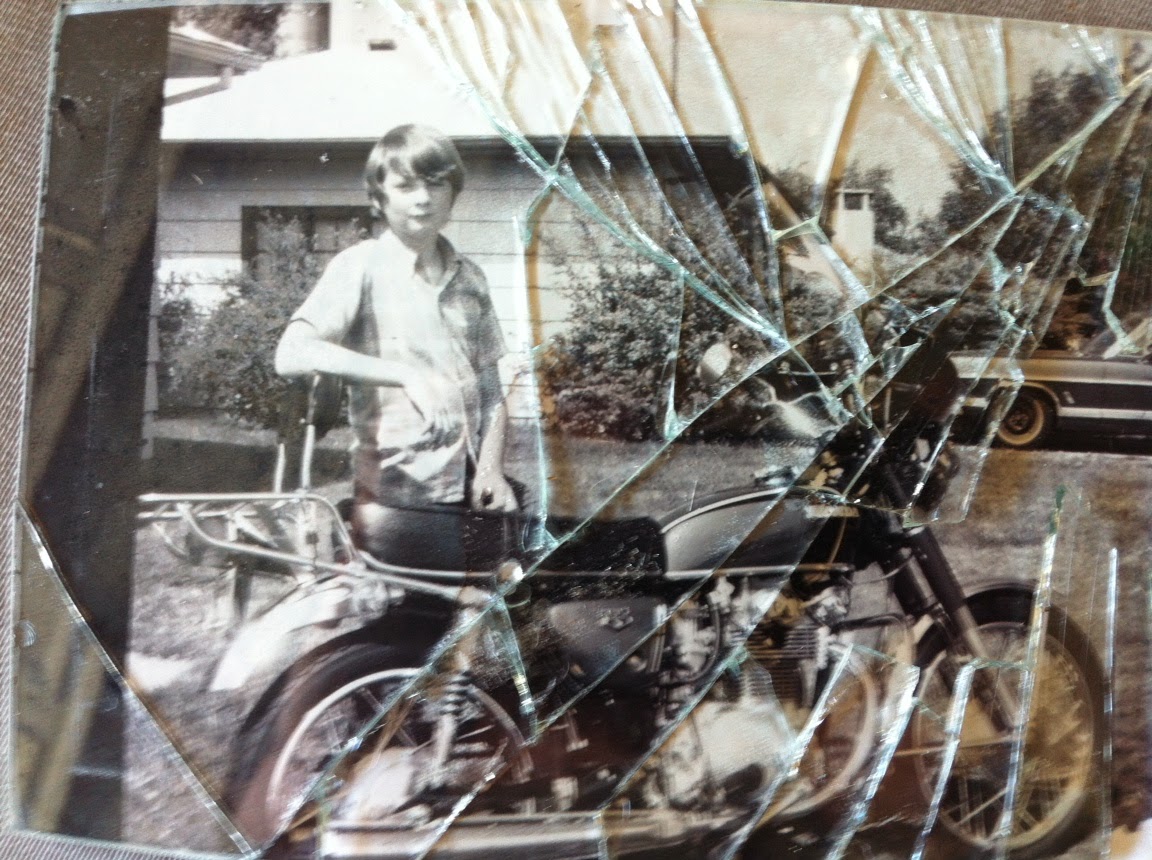 Another picture of the first full sized bike that MN owned.
Posted by marlu at 5:48 AM 2 comments: