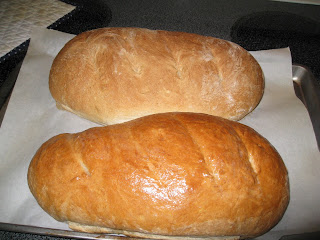 I made French bread again today. In the photo I have brushed one loaf with butter. We do like it and it is an easy recipe to make. No kneading  - just stirring every ten minutes five times. Let rest, form into loaves and let rise an hour and a half. Bake 30 min. at 400 degrees.
Result: real bread.
Posted by marlu at 7:57 AM 2 comments: 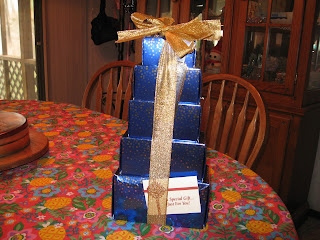 My friend since the fifth grade, Jo, knows I like chocolate. Candy, mocha, wine.
So this is what she sent me for my eighty-fifth (gulp!) birthday. I'm trying to limit myself to one piece a day. So far I have failed. The top box had Ghirardelli squares. The second had three large chocolate covered pretzels. The third has a sack of chocolate kisses. If I follow the one a day rule, I may be a opening the next box around Memorial Day. Delicious!
And thanks again, Jo!
Posted by marlu at 12:41 PM 1 comment: 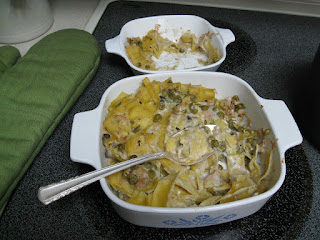 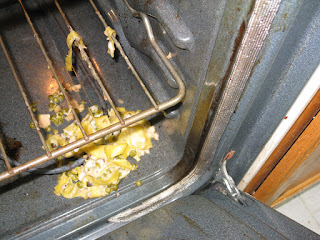 I made a casserole for supper - smaller than a full recipe but a little bit to big for the medium size Corningware. Solution, put the rest in a small Corningware and have an extra to share with - who? The neighbors? Or just for us to eat as leftovers.
As the photo shows, the  plan failed. The green oven mitt in the top picture was slick - it needs some rubber tread on it to grasp a hot, small bowl.  First mess I've had like this in a LONG time.
Posted by marlu at 4:32 PM 2 comments:

The Eyes Have It 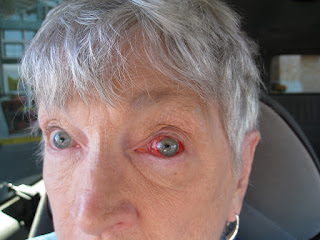 This is not the eye that was affected today. This was several years ago. The ophthalmologist  assured me there was nothing wrong then.
Today it was my right eye. It was not all red but a little bloodshot, according to Lee. He could see nothing foreign in there but I could sure FEEL something!
I called the office of the eye doctor before 9:00 and they said, can you come in now? Even after telling them there was no pain but knowing something was not right, I was glad they made it now!
A drop of antiseptic (deadening liquid) and the doctor found something. He didn't know what but he got it.
He said after the drops wore off, it would feel "scratchy." So far so good. But I have some drops in case it does feel worse. I am so grateful that they got me right in. The startling thing was, they didn't have me listed as a patient because I hadn't been there for five years! I had been there with Lee so I guess I thought I had had an exam too. Now have an appointment in April for a full exam.
Posted by marlu at 5:03 PM 1 comment:

Let There Be Light 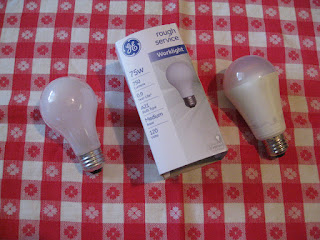 The light bulb on the right is extra heavy. It feels in my hand like a rock instead of a bulb. We paid over $10 the LED form. More light, less electricity used, lasts longer. These were all promises or shall we say advertising come-ons. I do not have the exact date we "installed" it in a ceiling fan contraption, but I don't think it has been over six months.
It went out two days ago. Lee, who keeps a lot of records, had the sleeve it came in but not the date installed. (That was my fault. I usually date stuff.) After reading the sleeve, I see it is guaranteed for a year. Based on three hours of use per day. Three hours! Gees Louise!
So today we are going to twist in a new one, the one on the left that only cost $2.00. Wonder what the expected life of a plain old ordinary bulb can be.
Posted by marlu at 9:21 AM 2 comments: 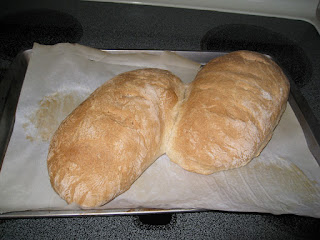 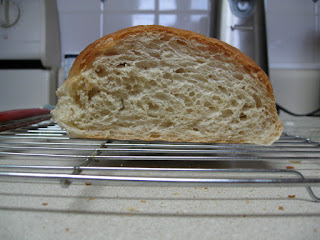 Today I made French bread. On the internet I had seen a recipe for "Crusty Bread." I do not have a
cast iron pot which is required for that particular bread. We saw a pot advertised at Kohl's for $69. Nope. Not for a loaf of bread. I used to have a cast iron pot but in a couple of moves, it disappeared.
Sooo, I remember that I used to make French bread a lot when the kids were little. The recipe was in our local newspaper and it is so easy. There is no kneading involved, (the same as with the Crusty Bread) just some stirring, forming and waiting for the "rise."
I thought I had  placed the raw loaves far enough apart on the parchment paper to bake them separately but they rose more than I thought they would.  Siamese French Bread.
It was a success. One half loaf has disappeared.
Posted by marlu at 8:48 PM 1 comment:

Tonight (Saturday) Cruz won in Kansas so the first thing he says is, "God bless Kansas." Then he added Idaho, where he was currently standing and Maine, where he was leading. "God bless Idaho. God bless Maine." What about the other 47 states? I guess they only get blessed if he wins there.
Posted by marlu at 5:55 PM 1 comment:

We received the property evaluation notice from the county. The house has been determined to be worth more than it was last year. Sigh. I guess that would be nice if we were selling but I'm afraid that will only mean the house payments will also go up.

Wouldn't it be nice if wages went up?

I used to enjoy watching Jeopardy.
Either I'm getting much dumber or their categories are getting more difficult. I know absolutely no ancient history or European geography. However, the final round today was this:


Score!  I knew that one and none of the contestants did.
Posted by marlu at 8:14 PM 3 comments: