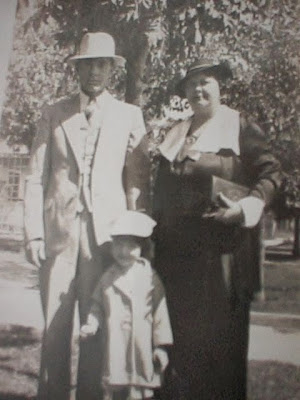 I am noticing lately that my memory is not what I would like it to be.
I see someone in an old movie and the name does not come to mind!
This is not an important thing to try and remember but
what else am I forgetting?
I do remember that this is my mom and dad and me.
This photo is about 1934 or '35.
I was about 3 or 4. (If you do the math, you may
understand why my memory is not what it once was.)
Don't I look fashionable in the hat?
I love hats.
Most hats I see today are ball caps except during the winter.
I wish hats would make a comeback.
Maybe 2014 will be the year of the hat! 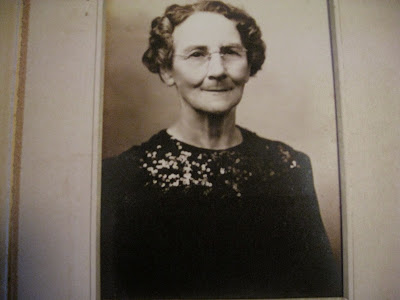 This rather stern looking lady was my great aunt, my grandmother's sister,
Maude Pringle Harken.
1880-1961
She was very kind, not stern at all; a wonderful cook and lived in Iowa.
What I liked best was that she and her husband, P.J., had an old pump organ
in the living room and I was allowed to play it!
They also  had electricity on their farm thanks to what we
called a wind charger.
My grandparents lived a few miles away and
had only coal oil lamps and a wood burning stove which
I thought was really neat. They both had crank telephones where you
rang for the operator with a small  handle. You always
listened for your ring, two  longs and a short, for example.
And then the temptation was to listen in on the neighbor's call
but that was a big no-no. 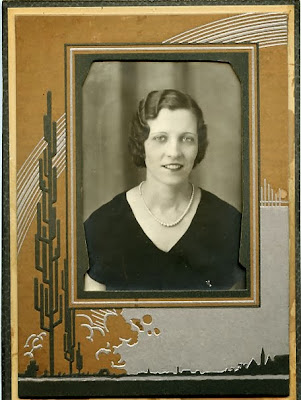 In my years as a child, I had many "Aunts" who were
friends of my mother. They were too close to be
called Mrs. and it wasn't proper to call them by their first name.
This is photo of "Aunt" Edith Colgrove Johnson.
She and her husband, Sidney, lived in Dalhart, TX.
What a lovely woman she was and such a joy
to visit.
I love the fancy cardboard frame which
has cacti and the silhouette of a town along the
bottom. I'm pretty sure this was taken in the '30's. 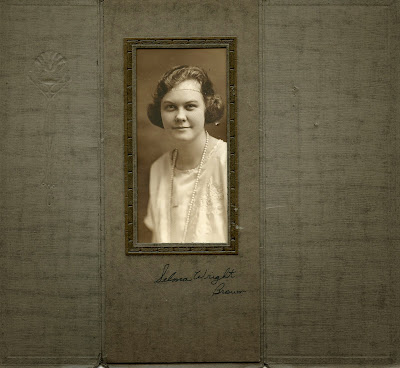 This is a photo of my mother. I was surprised by the hairnet.
We only wore those when we worked at the lunch counter
at Kresses.
She is obviously not dressed for work. 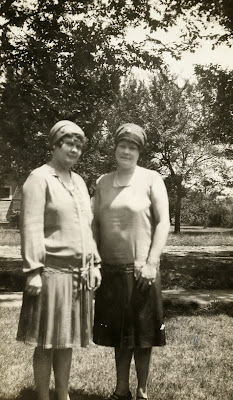 My mom, Selma Wright Brown and her older sister, Iva Wright Sargent.
I believe that is the dress my mother wore when she married my dad in 1928. 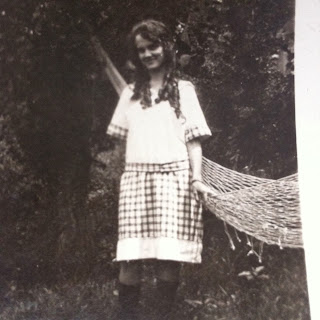 This photo is two by three inches so it doesn't enlarge well.
It is a photo of Miss Violet Thompson from Rolla, KS. on her
twenty-first birthday, sometime in the 1920's.
It was in my mother's photos and she took care
of Miss Thompson from August 11th to August 26th
as a private duty nurse.
Yes, they used to have a single nurse go to a patient's
home and care for them.
Today we have home nursing care and I don't know
if just one person is assigned or it's several.
I believe that when my mother did it,
the nurse actually stayed in the patient's home.
I wish all the photos I have from her collection
were so carefully detailed on the back! 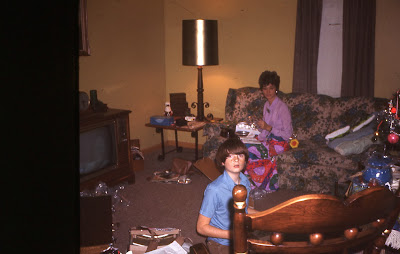 (after the opening of presents)

Merry Christmas
Posted by marlu at 5:51 AM 2 comments: 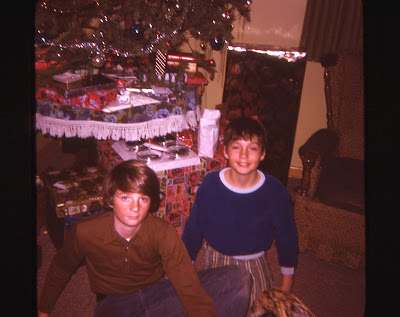 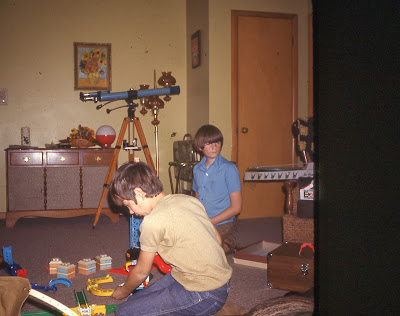 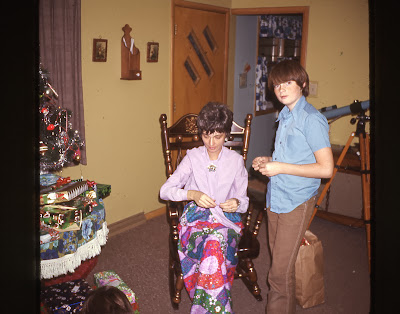 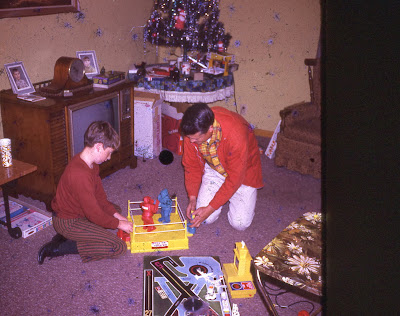 Boys and their toys.
Posted by marlu at 10:21 AM No comments: 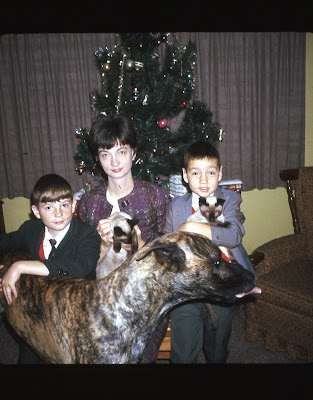 Brutus and two Siamese cats whose names I do not remember...Spooky and ? (Sam)
Thanks MN.
The dog is not eating a third cat.
We had sea monkeys, gerbils, cats, dogs, and turtles at various times.
Of these, the cats never stayed around long.
Seems the member of the family not shown here is not a cat person.
Posted by marlu at 9:19 AM No comments: 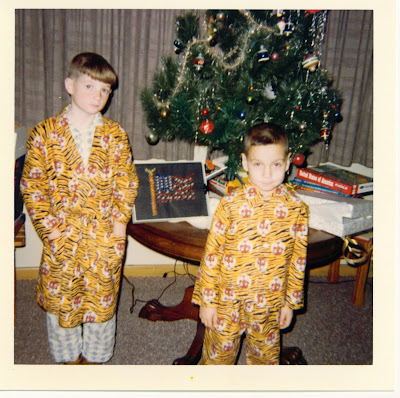 They do not look overjoyed at their home sewn robe
and pajamas that I made.

Remember Lite Brites?
Posted by marlu at 8:14 AM 2 comments: 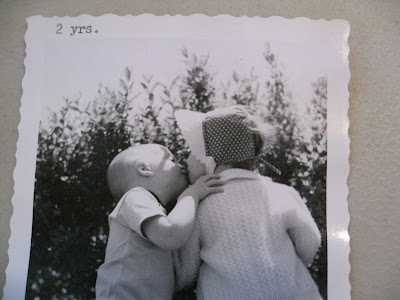 Reaction by a certain school district to children's affection
made me think of this photo.
1961.
A different time and a different mindset.
No harassment here.

Back in the Day 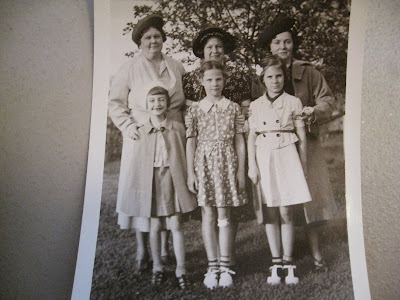 This rather ancient photo which I date to about 1937, is of
my mother, two of her cousins and their daughters.
I am the caped one who unfortunately is missing a tooth.
Big hats much  have been "in" that year.

I do love to look at the fashions, both in photos and old movies. 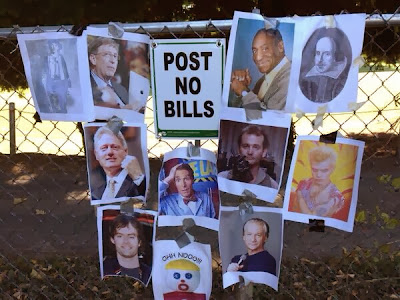 Whirlpool in the Sky 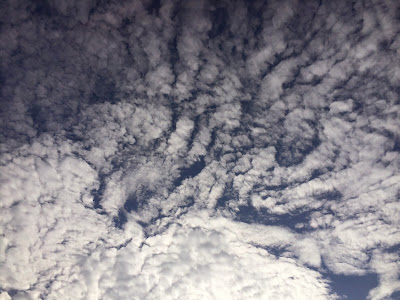 I fnd this very interesting.
From Oregon.

I wish I were more organized. Today I found a container in the freezer and decided some chili would be good for lunch. After thawing, I served it in a bowl with some Frito Lay Corn Scoops.

Next time I freeze something, I believe I will mark the contents on the lid. A bowl of spaghetti sauce is ok but not my favorite without the pasta.
Posted by marlu at 2:19 PM No comments: 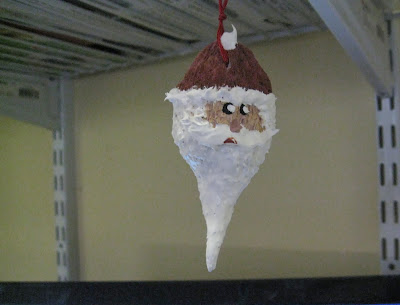 A blogger friend gave away these cute Santas. I was lucky
enough to win one by just clicking and/or commenting.
She is very talented and does a lot of artistic things.
I admire that. 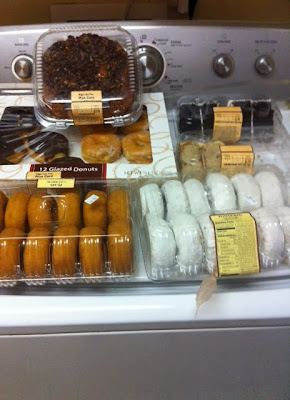 What happens when I don't go to the store with the man with the money.
(our household has two people.)
I need more freezer bags. 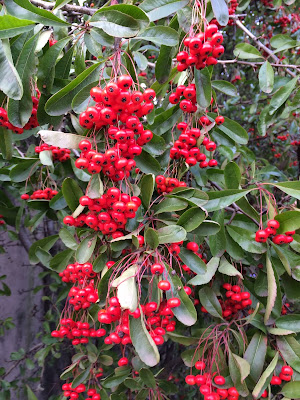 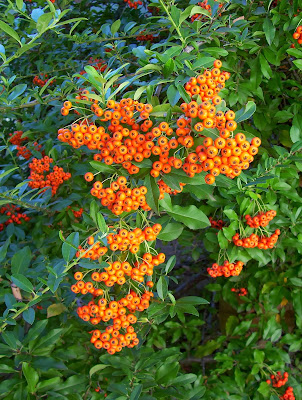 PN sent me the picture of the red berries today from Oregon.
The photo reminded me of one I took years ago in Kansas.
Even the leaves look similar. 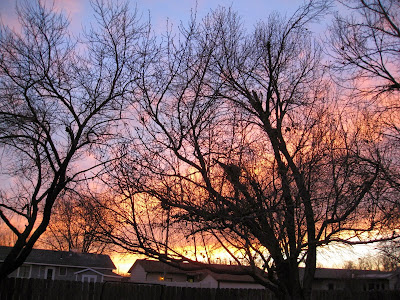 This was actually more beautiful in person, but very chilly to get out
and snap that cold shutter.
Twenty-one degrees is better than the teens we've been having
but still very nippy. 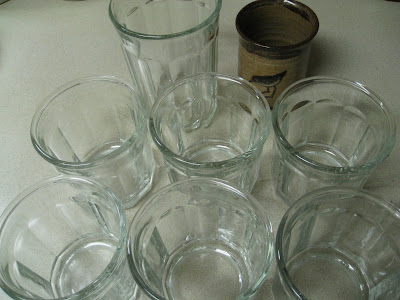 And you must keep drinking.

That's what the nurse said so since Saturday I have had at least 64 oz. of water
every day plus at least one cup of coffee.

Is coffee a diuretic and ruining the good the water is doing?
I ran out of the small glasses for the picture so used one big glass.

And that is my favorite cup from Sandpiper Inn inn Washington state;
a souvenir from a trip there with Marcheta and David.

I decided to make potato soup this morning.  I peeled the potatoes, chopped some celery, carrots and onion. I made some roué with butter and flour to mix in after the potatoes were done. Salt and pepper added.

It tasted like the flour paste we used to make in kindergarten.

What was wrong? I've made it the same way many times. Sooo, to the fridge to see what I could add.
A small container of left over canned beef gravy originally used to make hot meat loaf sandwiches was on the shelf.

I dipped up a bowl and added a spoonful of gravy. Not bad!

I dumped all the left over gravy into the pan and warmed it through.

L. liked it. I didn't mention the secret ingredient. He likes that canned gravy and I'm not crazy about it but it sure helped  the flavor of the pot of glue. 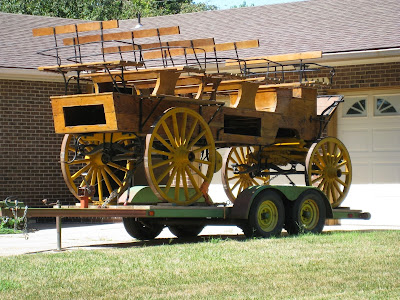 This was parked in our neighborhood a few years ago.
I have no idea what it is used for except to
give a lot of people a ride at one time. 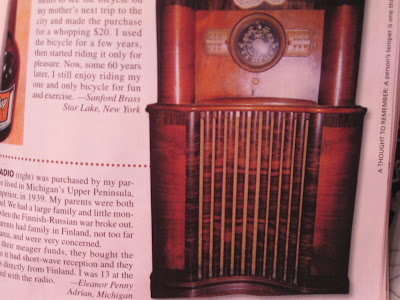 On a radio we heard the news. Pearl Harbor had been attacked. I knew it was serious from the looks on the  faces of my mom and dad. I was ten.

The picture is of a Zenith radio we owned but I'm not sure if it is pre-1941.
The earliest radio I remember was a tall thing on four legs, very fancy woodwork and a bench in front to sit on while you "tuned in" a station. There were two hinged doors that closed when you weren't using it, making it look like a nice cabinet. One of our cousins later took the innards out of theirs and made a lovely liquor cabinet.

This particular model had a toggle switch on the back that said Radio/TV. The man who delivered it said when television became available, all we would have to do is buy a screen to place on top and we'd be ready to watch. I think he was misinformed.
There are fewer of us left who remember that day and Monday at school we listened to President Roosevelt give his speech. We had small radios in each room at Roosevelt Grade School - named after Teddy - not FDR.
By the way, winning World War II and defeating the Axis powers took four years. At the beginning we were training soldiers with broom sticks until rifles were made available.

The title of this blog is quite appropriate - I do ramble on...

Later:  I did look at the text to the left of the photo which was in the magazine Reminisce. The woman who sent the picture in says her folks bought the radio in 1939 in order to have short wave. So it is possible that we had this radio in 1941. 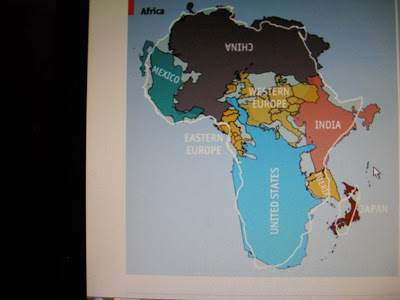