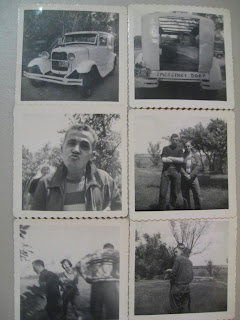 The lower left photo is from a picnic attended sixty-six years ago today. Jim Thomas, a girl, possibly Marilyn, and Lee, my future husband.

We met on a blind date. There was delicious fried chicken made by my future mother-in-law. That was very nice of her! I do not remember any other food we had. On the way to the river, we stopped at Bill Romer's house to borrow a wash tub for ice for the beer. Waiting in the '48 Ford coupe, I looked at the name on the key ring...."What an odd name! Never heard that one before."

We had a good time. No excess drinking or troubles (!) Lee did wade in the river and somehow lost a shoe. He was able to get it and throw it back to the bank. In the picture it looks like he's adjusting his waistband on his wet cuffed jeans. I don't remember why he went into the water. He was home on leave from the Navy and I think the shoe was navy issue.

The other photos show Jim and Lee cavorting around on another occasion. The Model A belonged to Jim and there was no roof. A story was told that one night he was driving sitting on one of those boards, steering with his feet. Thank goodness I wasn't there. I'm not sure if there was alcohol involved in that event. Wild times in the fifties.

And three and a half months later we were married.