Here It Is - Sunday!

We are having a few warm days until we go back to the coldness. I felt a cold coming on so I used some Zycam and I think it sent the cold away. I hope so, anyway.

Yesterday I made chili. We like it no matter the outside temperature. On the packet of chili flavoring mix, I saw a recipe for Cincinnati Chili. No beans. A tablespoon of cinnamon added to the rest of the ingredients, and served over spaghetti with the beans added on top. I don't believe I'll try that one. I remember my mom used to buy a "brick" of chili. It was about the size of a pound package of butter and had meat, beans and flavoring molded together. She cut it up in pieces and put it in some water. Then we had chili. As I remember, it was very good. I also remember my dad putting a small splash of vinegar in his bowl from the small cruet on the table.

I add celery, green pepper and onions besides beans, tomatoes, hamburger and a dash of Worcestershire and liquid smoke.

Many years ago I saw a recipe for a chocolate cake that used sausage in it. What was I thinking? I made it and everyone who tried it said they could really taste the sausage and they really didn't like it. Maybe too much sausage and not enough chocolate? 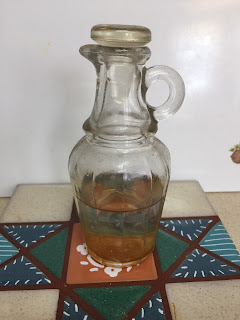 This is the little vinegar cruet that was on our table about eighty years ago.
Posted by marlu at 5:34 AM