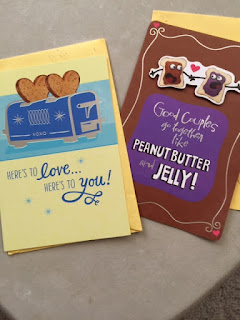 These two card were sent to us last August for our anniversary. The PBJ one was sent from the east coast (New Jersey.) The other was sent from the west coast (California.) They were both mailed the same day, August 6th. As you can see, they both have the same theme.

One is from my sister-n-law and the other from her niece - and ours.

I just thought it was an amazing coincidence and since our day began with a temperature of four degrees F, I don't plan to get outside and do anything exciting. Maybe this week-end the forecasters are correct, it will be fifty-nine and we can go somewhere!

(If this post doesn't make much sense, I have a cold and I just don't care.)