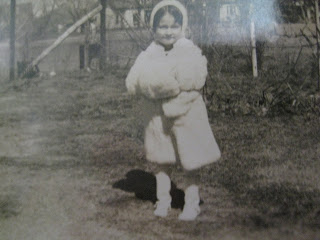 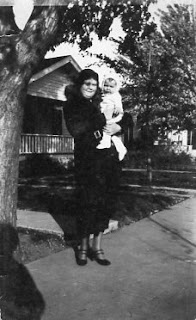 I just watched a movie from 1938 with Lucille Ball and Jack Oakie. She was a movie star and wore several furs. One was a jacket, short in the front with four (4) fox heads hanging from their skins and in the front. When she folded her arms, they were no longer visible. The tails, of course, were in the back.
In another scene she had a garment that had only two creatures. These were much larger and looked like foxes. Their tales were again in the back and the front showed their mouths fastened together.
Can we believe that people wore those things?

Well, yes. The first picture is me in a white fur coat, (rabbit?) complete with muff and white boots. I think the hat was angora. It was fluffy yarn.

The last shot is my mom holding me with a stylish coat with a belt. I am not sure what material it was made from but later while I was still a child, she had what she called a seal skin coat. It was black and very shiny with black short fur. I wonder if it was really seal skin.

This was in the Depression. We weren't rich but my dad had a job at the electric company, Kansas Power and Light, so we were never without necessities. Before I came around, Mom was a nurse doing private duty. Maybe she saved a lot of money. But as I think about it now, how in the world could a person on working man's wages afford things like that!

Later.  Second Lucille Ball movie, Annabel Takes a Tour. So far she has worn a coat with a humongous fur collar and a muff the size of sofa pillow, and a full length full fur coat. They must have been all the rage in 1938.

Even later. Now she is in a negligee with fur around the collar, down the front to the floor and on the sleeves! They must have had supplier that gave the studio a good deal.


A fact from www.imdb.com which tells a lot about the starts and movies:  "Before her movie career she was a model at Hattie Carnegie's in New York. She mainly modeled heavy fur coats, because she was startlingly thin as a young lady."