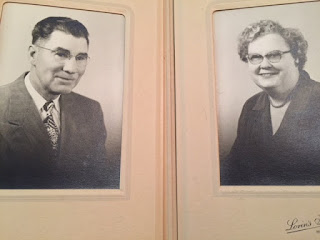 A little early for Mother's Day but nothing else is going on here. (It's 88 and somebody has the A/C turned on.)

This photo was taken for my mom and dad's 35th anniversary. They were sixty-five and fifty-nine in this picture in 1963. My dad was an electrician for Kansas Power and Light and my mom was a registered nurse. She took her training in Halstead, KS, where Dr. Hertzler, the "Horse and Buggy Doctor" started a hospital. He wrote a book called by that name. Mom graduated from training in 1923 at age nineteen! When they adopted me in 1931, she quit nursing. When WWII happened, there was a nursing shortage - along with many other things that were scarce. The hospital wanted her to come to work and she said she had ten year old daughter. Their reply was, "She's old enough to take care of herself." We worked it out with a neighbor to keep an eye on me and she did go back and worked until 1948.

How she managed to do that with very little help from her only daughter was amazing. Dad helped a lot but they didn't expect enough from me. I regret that I didn't do more than keep my room clean and do dishes.

She was a great mom and my dad was quiet and loving. He could be strict - they both were. I had to "mind" and people think that ONLY children get away with stuff. It wasn't that way at our house. I'll admit I had toys but so did my friends.

I had a great home life. There was no violence, no arguing and lots of love. Disagreements, sure, but so minor.

Who could ask for a better childhood?

Mom died at age sixty. . .way too soon. Dad made it to eighty-three. I miss them.