The days just seem to roll by and so I missed another day of blogging.

We are having a wonderful relief from the heat today. Only about 80. We were out for a short time to run an errand.

The dog is on a diet. What we thought was a fatty tumor was just fat. Actually there was one  on  each side which I still don't see but the vet says so. Love handles he called them. New rules: No people food and 1/4 cup of dry food twice a day. This is killing Lee because whatever he ate, the dogs ate. Only the female kept gaining weight. Thirty-three pounds on a small dog is too much.  Vet 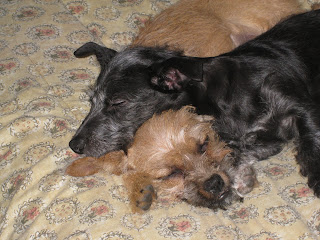 said he could take her for two weeks for diet camp and she would lose the weight. So much to my other half's dismay, we are doing it ourselves. We have to shut them out of the room where we eat. They didn't sit and look at me. They knew they weren't getting anything from me and it didn't bother me at all. Others have a more tender personality.

The photo is when they were rescue puppies. Jill is tan and Jack is black. The picture is very deceiving because Jill is the bully and poor Jack is intimidated daily. They had been in a kennel together so we thought they would get along. We got them on Halloween, 2011. Black and orange pets were half price! Mostly they do get along (ignore each other) but once in a while Jill will block Jack's path to the doggie door or snap at him for no reason. They do keep us company.
Posted by marlu at 6:06 PM