Today is the big day. We've been married sixty-six years. And my mother-in-law told me several years after we got married at the parsonage that the reason they didn't come to the 7:30 p.m. ceremony was that she didn't think it would last and she didn't want to be a party to the crime. (Lee's sister was eleven and we are now more like real sisters. Love you, Judy.)

Fortunately, I thought that was funny. I guess we showed her!

My mom and dad were there and three friends stood outside to take our one wedding photo. I don't remember whether it was Darline, Carlene or Barb who had the camera but they forgot to advance the film. 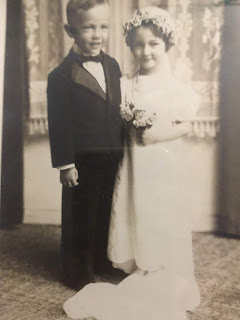 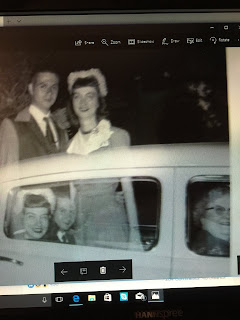 The first photo is from about 1935 - a Tom Thumb wedding at the church. Why did those church ladies dress up little kids as bride and groom? Tom Thumb was a big deal in the circus world.

The second is from 1952. I  think my mom was disappointed that we didn't have a church wedding. I personally thought it was a waste of money. We'd known each other three and a half months. I guess nobody thought it would last very long.

We have two sons who live far, far away. The older one also got married on August 15th without his wife even knowing that it was the same date as ours. They had a nice ceremony at the courthouse with his in-laws there and a couple of their friends. The other son and his wife eloped! Nobody can say the Nutterfields do things the traditional way. Both the daughter-in-laws are great girls/women! And now we have four granddaughters!