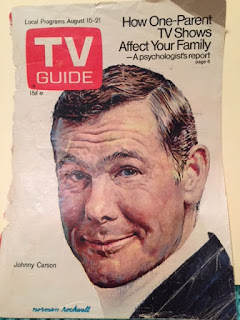 I like this painting of Johnny Carson that appeared on the front of TV guide in an unknown year.
I was going through an old file case where I have some of the weirdest things that I must have wanted to save. This one was torn from the guide and put in the file under J.

I liked watching him back in the time when I could hardly stay up that late because I was working and had to get up in the morning. We later have learned that Johnny was not as he seemed to be. Not as friendly and kind in real life -  nobody's perfect. He gave most of us a lot of enjoyment and laughs in the character he played on his show. He was an interviewer who brought out the stories of his guests by letting them talk! And, let them tell their funny stories without butting in - at least that's the way I remember it. Some folks today who make their living on television could learn from the method of letting the guest talk without interruption!  Just my thought for the day.

Later:
I just returned from the store where I buy yarn. One of the colors I had chosen, Minty, was nowhere to be found in the Red Heart section. Another woman was there searching for colors and we began to talk about merchants not having enough of one color at certain times. We discussed what I was looking for and she suggested another store that also sells yarn. I left with a substitute color and went to the most distant cash register to avoid the "check out yourself" aisles.

Behind me I hear, "Is this the Minty you were wanting?" Here is this tiny little woman with a delightful East European accent holding a skein of yarn. It was a different brand but it was the right color. I thanked her and then she offered to take back the skein that I had picked as an alternate! I told her how sweet she was to be so helpful!!  What a nice thing to do.

It's no short jaunt back to the yarn aisle!