A Surprise in the Mail

Yesterday we received a large, heavy box from our number two son. (I only call him that because he was the second offspring to arrive.) Both of them are #1 in our opinion!

He knew that my printer used ink at an alarming rate even when I was not printing anything. A suggestion that I print something every other day or so did not seem to work out. So the Epson which had multiple uses; print, copy, scan and fax, sat idle.

In the large box was a laser printer. The struggle to get the inner box out of the shipping carton was something you don't want to see. After a sliced finger (who knew cardboard could be so sharp?) we succeeded. We also remembered the furniture slides out in the garage so those were used to move the mass to the "office."  (Third small bedroom.)

The enclosed instruction sheet fastened to the innards of the printer looked like a cartoon. Simple enough to follow. It must have been the distraction of the cut finger but it looked quite involved. I talked to the sender and drank some sweet tea. After feeling revived, I sat down and followed all the steps. Parts out, tape removed, parts reinstalled, plugged in to PC and electrical outlet. Then help from the West! By phone and by linking in to the computer, our son did the part I could never have done: find the driver, install it and make the thing work!

The first thing I printed was a recipe. The font size on the document seemed small so I enlarged it and hit print.  Whirring and printing and the paper shot out. Suddenly it shot right back in! What the heck? And then here it came again. I picked it up and the process had been to put the content which was too large for one page, on the reverse!  Wow! 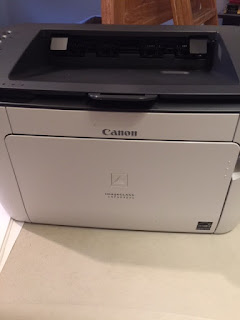