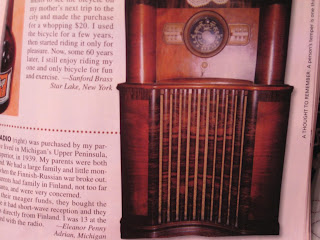 I  believe this is The radio that my folks and I were listening to when we heard the news about Pearl Harbor.
It was a Zenith with short wave included. Push buttons to the right of the circular display could be set to favorite stations to find them quickly. On the back was a toggle switch marked TV. The delivery guy told us that when television was available we would only have to be a screen (!) and put it on top of the radio and we would have pictures. The buttons to the left were for more treble or base tones.

I think this was around 1939. I thought the wood was beautiful and almost like a piece of furniture.

When we heard of the attack, my parents looked very serious and worried. My dad was forty-three so I think he was too old for the draft. He was also an electrician for the Kansas Power and Light and this may have been on the list of essential jobs.

I remember collecting newspapers, metal and saving grease; buying War Savings stamps. $18.95 would get a bond. In ten years the bond could be cashed in for $20.

We were all glad when it was over.     So many served. So many lost.