More on an Unpleasant Saturday

Yesterday while trying to find the correct connection for the HDMI port (!) on the big tv, I brushed up against a small quilt I had hung up. It was covering the beautiful but so far unpainted repair job of the hole in the wall. It had been held in place with two of those large push pins with colorful "pushers."

I picked up the small quilt and tossed it on the bed. I was so absorbed in trying to find out if I could connect our new set up for the cable company, that I have no memory of picking up the pins.

Later, they were  nowhere to be found. Lee was certain the dogs had eaten them, thinking they were dog bones. We tried using a flashlight to look under the dresser the big TV is sitting on. I tried using my phone camera to take a photo under it. Nothing but a dusty carpet. Lee worried and worried about the dogs having a horrible death. We searched every where in that room that we could with a ruler used as sort of a snow plow to sweep under furniture.

Nothing appeared. He took all the bedding off the bed, thinking they might be in the blanket.

This took up most of the afternoon. I finally went into the dining room where my parents desk is located and looked in the drawer where the pushpins can be found. There were a green, a blue and a white. Lee insists they were both blue but in the photo I took of the hanging quilt, only one looks blue and the other looks dark - could be green.

So we finally concluded that I had put them in that drawer. What scares me is that I have no memory of picking them up from the floor and putting them in the desk. 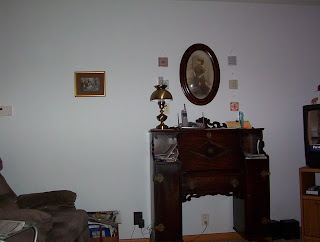 The desk at a former residence.
And tomorrow, the final installment of the Saturday Full of Irritating Events.... 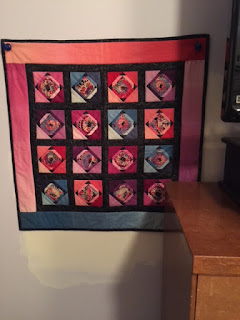