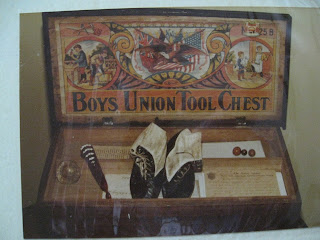 My dad was born in 1898. This was his tool chest when he was a boy. There is a separate wooden tray which is holding some old brown marbles, a pair of his very small leather shoes and a hair ornament from his mother.
I wonder what tools were included. By the time I received it, they were gone.

The chest itself appears to be oak. Maybe I should google Boys Union Tool Chest.

Here is a description under a photo like the one above:

In the early 1830s, Rufus Bliss opened Bliss Manufacturing Company in Rhode Island. Bliss became famous at the turn of the 20th century for making children's toys, including lawn tennis and croquet sets. The Boys Union Tool Chest was advertised in the 1911 Bliss catalog as an exact imitation of an adult's tool chest. This was made of a weathered oak or chestnut finish, and the tools were for practical use.