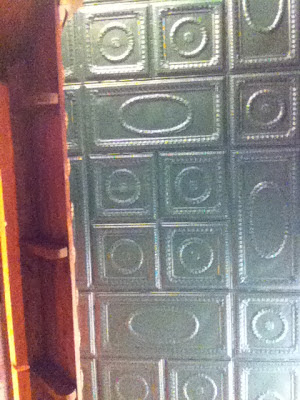 A blog that I follow has had some photos of what the blogger's camera sees when it is lying on the table.

Here is my offering. I really love those old tin ceilings;  spray painted or left original.

This is from the Anchor Inn in our town.

Why is a Mexican restaurant called Anchor Inn? We used to have a naval base in the middle of Kansas - no ships but plenty of pilots to be trained. Some of the reasons for this location were the number of cloudless days, easy access to rail and highways, open country and a nearby liberty town.
So the folks who started the cafe, chose the name because of the naval air station. The navy was here from 1943 to about 1946, closed and reopened in the 1970's.
I was too young to date a sailor in the 1940's and when the base returned, I had married a sailor from Emporia who had never heard of Hutchinson's base.