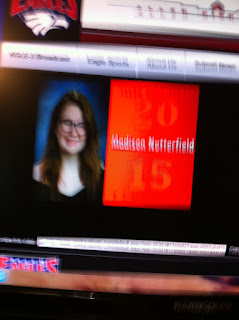 This blurriness of this photo is my fault. I was attempting to take a photo on my phone of
the display that was on the jumbo screen at a football stadium in TX.
Without a tripod, I failed.
This ceremony was gigantic. All students (1400) had their photos shown on the screen before
the ceremony started at 7:30.
Many speeches and announcements were given, of course.
The awarding of the diplomas was started by the principal who shook each student's hand,
while reaching back with his left hand for the next diploma which looked like a hard cover document. He placed that diploma in the next student's left hand while he shook their right.
This continued for quite some time and I was thinking, "He must be getting tired."
Suddenly there was a shift. A woman from the school board replaced him; and later two more women
and a man took their turns. There were some hugs with the principal and that surprised me.
Maybe this is common now. I haven't been to a commencement for a long time!
I stayed with the streaming video over the internet until the grads tossed their hats.
My sister-un-law said she gave up after our Madi came across the stage,
and today Madi told me if she had been me, she would have pulled an Aunt J. too!
The fact that we could see this live from 400 miles away is so awesome.
I don't even like the word awesome. It's over used. But in this case, it applies.
Posted by marlu at 3:57 PM