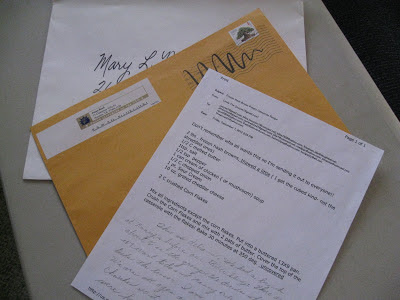 This is not a complaint against the postal service.
In fact, I think they should raise the rate for delivery of a letter
to $1.00 and quit increasing the price of a stamp by a penny every year.
They do an amazing job - sometimes in an odd way.
This letter was mailed to me by a friend in Houston, TX, on
November 2nd in the brown envelope. For some reason it was
resent in the white envelope from the United States Postal Service
on November 7th.
Readdressed correctly, even with the the T's in our last name uncrossed as they
were on the original. (Perhaps they thought they were L's.)
We received it November 16th. No postage was due so we do not know why
it was remailed.
If we had been waiting for a big check, we would have been wondering where it
was for two weeks.
Oh yeah.  Now there is direct deposit so forget the check example.