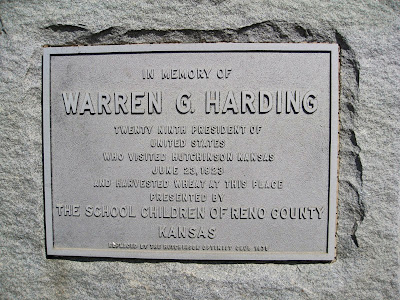 This plaque is on Rayl's Hill west of Hutchinson, KS. President Harding was on the trip that took him to the west coast and sadly, it was his last trip.
From Wikipedia: "During Harding's western travels, historian Samuel H. Adams claims that Harding's political views began to expand, and became more independent from established Republican Party agenda. In St. Louis, Harding promoted U.S. participation in the World Court having earnestly desired world peace. In Kansas, Harding gave a speech on agriculture and, much to his doctor's displeasure, rode on a farming combine in searing summer heat." He continued on to Denver and Alaska, returning to Seattle, Portland and San Francisco. After his death in California, there were rumors that he had committed suicide or was poisoned by his wife.  Physicians were divided on the cause of death: stroke or heart failure.