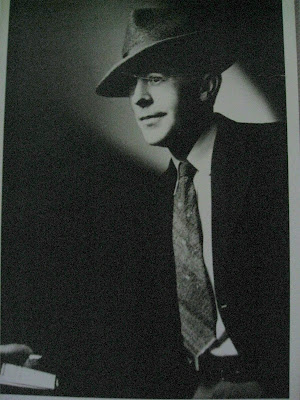 This man was an author, a typesetter at the Hutchinson News and a friend. He was also a distant relative (married to my dad's cousin.)
His daughter and I were as close as sisters without the sibling rivalry.
Ernest wrote a column, State Senator Soapweed for the Labor Review. There was a series of articles for the News that revealed the unknown facts of Kansas history. These articles were illustrated by Shirley Crawford Schmidt.
He was a great guy and I always thought he reminded me of Fred Astaire - his build and mannerisms.
Later when I received this studio photo,

I think the tilt of the hat reinforced that opinion.
Posted by marlu at 8:40 AM