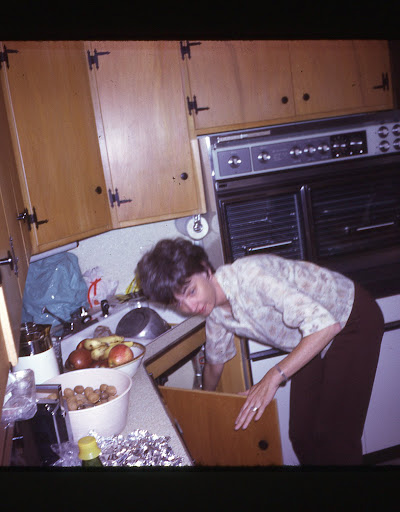 Continuing a series of "awkward" photos taken during the Kodak slides period: Reaching under the sink for something.
This picture is obviously the basis for the remark our four year old younger son made when he was visiting a friend's home and saw their kitchen. There were some unwashed dishes and various things on the cabinet. He announced in a loud, low voice, "My mom has a messy kitchen too." (I was always saying that I needed to clean up this messy kitchen.)

In the background is 'Super Stove.'  Two ovens and a sliding drawer that held four cooking burners. Below there was storage space and that was the main reason we bought it. . . a very small kitchen and with a dishwasher installed, there was hardly any place for pots, pans and casserole dishes! This was a 1969 Frigidaire. I can't remember the model name. There were options to set the oven to start a meal later in the day while the housewife was away, playing bridge, shopping or working outside the home.
I never used that believing that the food sitting there waiting to be baked was not refrigerated and more likely to cause food poisoning than my regular cooking methods.

The  space had been measured very carefully by L. to be sure the range would go into the space under the upper cabinets. When the delivery men came in to see where it was to go, one said, "It will never fit." As you can see, it did, barely.
Posted by marlu at 6:46 AM